From civilian oilers to aircraft carriers

Thes former Cimarron-class oilers launched in 1939, for civilian use were requisitioned for the supply needs of the fleet, then recommissioned by the U.S. Navy in 1940–1941 as AO28, 29, 31 and 33. Later in early 1942 it was decided to convert them as escort aicraft carriers, a choice constrained at the time by the shortage of MARAD type C3 cargo ships for extra conversions. The USN desperately needed new escort carriers, so was decided to attempt the Long Island type conversion to these four oilers, a work started in February-March and which took around six months, until the ships were recommissioned in August 24 (Santee), 25 (Sangamon), and then Chenango (19 September) and Suwanee (24 September).


⚠ Note: This post is in writing.
Due to their larger size, these were the largest escort carrier conversions to date. They still managed to be faster than C3 conversion with 18 knots, roomier, and thus carrying 31 aicraft in normal condition, more than the C-3 based Bogue (28) for example. The larger hull also authorized more armament to be installed, twice as many 40 mm and two more 20 mm as completed.

Slightly larger they were designed as carriers from keel up. Since they were at the core designed as T3 tanker oilers, their machinery space was aft so the smokestacks were relocated on both sides aft also, at the flight deck level. Excellent first examples of Oiler conversions, they were found roomy, tough, and with a larger flight deck enabling larger aicraft, plus good stability on high seas. The Sangamons could also operate dive bombers, unlike other CVEs mostly carrying smaller F4Fs on board.

The Sangamon were named after rivers, a practice for oilers taken into naval service. The experience was judged satisfying enough the admiralty ordered a new class, from the keel-up, to be mass-produced: The Commencement Bay. The latter were about the same size but their dedicated design made them better thought after, one knot faster, roomier, so they could carry 33 aircraft and a heavier armament. In all, 23 were planned (CVE-105 to 127), all named after various battle battle places. On the total, planned FY1944 and all laid down at Todd-Pacific Tacoma between September 1943 and March 1945, the war ended before most could see action in the Pacific. The last four were cancelled. 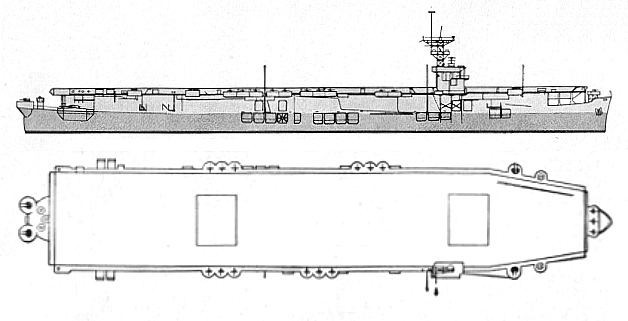 The Sangamon class in action:

Originally Esso Trenton , a the T3 tanker oiler , built by the Federal Shipbuilding and Dry Dock Company, it was operated by Standard Oil of New Jersey on runs from gulf coast ports to the east coast. After entering service in the early part of the war in the Navy as a tanker, Sangamon was converted into an aircraft carrier.
After conversion Sangamon was at the Allied invasion of French North Africa in 1943 before moving to the war in the Pacific. Post war it was sold into civilian ownership and scrapped in 1960.

The second USS Chenango (CVE-28) (originally designated as T3 Tanker oiler AO-31, after re-designation as an escort carrier, was first ACV-28) was launched on 1 April 1939 as Esso New Orleans by the Sun Shipbuilding and Dry Dock Company, in Chester, Pennsylvania, sponsored by Mrs. Rathbone; acquired by the United States Navy on 31 May 1941; and commissioned on 20 June 1941 as AO-31, with Commander W. H. Mays in command.[1]

USS Suwannee (CVE-27) (originally an oiler AO-33, converted to an escort carrier AVG/ACV/CVE-27) was laid down on 3 June 1938 at Kearny, New Jersey, by the Federal Shipbuilding and Drydock Company, under a Maritime Commission contract as Markay (MC hull 5); launched on 4 March 1939, sponsored by Mrs. Marguerite Vickery (née Blanchard), wife of Howard L. Vickery; delivered to the Keystone Tankship Corporation and operated by that company until acquired by the United States Navy on 26 June 1941; renamed Suwannee (AO-33); and commissioned on 16 July 1941, Commander Joseph R. Lannom in command.

USS Santee (CVE-29) (originally launched as AO-29, then ACV-29) was an American escort carrier. The second ship with this name, it was launched on 4 March 1939 as Esso Seakay under a Maritime Commission contract (MC hull 3) by the Sun Shipbuilding and Dry Dock Company at Chester, Pennsylvania, sponsored by Mrs. Charles Kurz. It was acquired by the United States Navy on 18 October 1940 and commissioned on 30 October 1940 as AO-29, with Commander William G. B. Hatch in command.
Prior to her acquisition by the Navy, Esso Seakay had been operated by Standard Oil of New Jersey (Esso) on the west coast. During her commercial service, she set several records for fast oil hauling. Her original model was a type T3-S2-A1 tanker.