The “Le Redoutable” was the world’s first steel-built central battery ironclad started a new breed of capital ships for France in the 1880s. She however still had wrought iron armor. She was also the largest warship afloat when launched, was rebuilt in 1894, and saw service until 1910 in the Mediterranean, Indian Ocean, and in the Far East where her career ended.

The term itself, “ironclad”, was seemingly referring to a ship type appeared in 1858 (or even before according to authors), meaning iron was the primary material for protection (hence the “cladding”), not structure. Indeed if the French were first to launch a sea-going Ironclad, Gloire, she was still wooden-built, whereas the British Warrior class were the first entirely iron-built. Over the years, the French started to use iron for the structure and it was something common in 1870. However steel, which was known for millenias, was only available in small quantities for various objects and structures of limited size, but the industry was not able to deliver large plates made of steel, nor having a reliable industrial process yet to do so.

The French iron industry lagged behind Britain and Belgium in the years 1815-1830, and after 1850 still lagging behind Germany and Luxembourg. Its output was plagued by too many small and inefficient firms. However the German Siemens process was adopted, and Le Creusot became the French’s leading company for steel manufacturing. Sir Carl Wilhelm Siemens developed the “Siemens regenerative furnace” in the 1850s, a fundry process using a regenerative preheating with a reversible furnace flow, allowing an open-hearth furnace to reach temperatures high enough to melt steel.

In 1865, French engineer Pierre-Émile Martin indeed took out a license from Siemens and applied the process for making steel. The modified regenerative furnace was able to produce large quantities of basic steel with 50 to 100 tons and later special processes to make 250 or even 500 tons: The Siemens–Martin furnace. His process complemented rather than replaced the Bessemer process, but was slower and easier to control, also allowing large amounts of scrap steel, but refining a charge was an overly long process. In short, this gave an edge to France in 1870, and naval engineers were quick to take note, as steel had amazing structural qualities contrasting with iron.

The advantages of steel

The prospect here was to allow the production of very large, homogenous steel parts, not for protection, but structure, while wrought iron armour was stil used for plating and had in some cases wooden backing. Bessemer steel was favored by French metallurgists Gruner et Lan, but Martin found the Siemens process superior and obtained large financial support. After the first tests in 1864, his furnace was first operational in le Creusot (Franche-Comté in the east) -a 1781 company funded by François Ignace de Wendel-. Soon, the company became the main supplier of steel for the French Navy.

France was the first nation to start construction of a warship almost entirely made in steel. However let’s recall again steel at this point was still not usable for armor plates. Redoutable’s wrought iron armor plating, was completed by part of her exterior hull, also in iron rather than steel. But the steel produced was relatively “elastic”, not brittle, which was a well desired property for the structure. Moreover it had a superior strenght at equal weight, allowing to free extra weight for added protection, and that’s what made this ironclad unique. 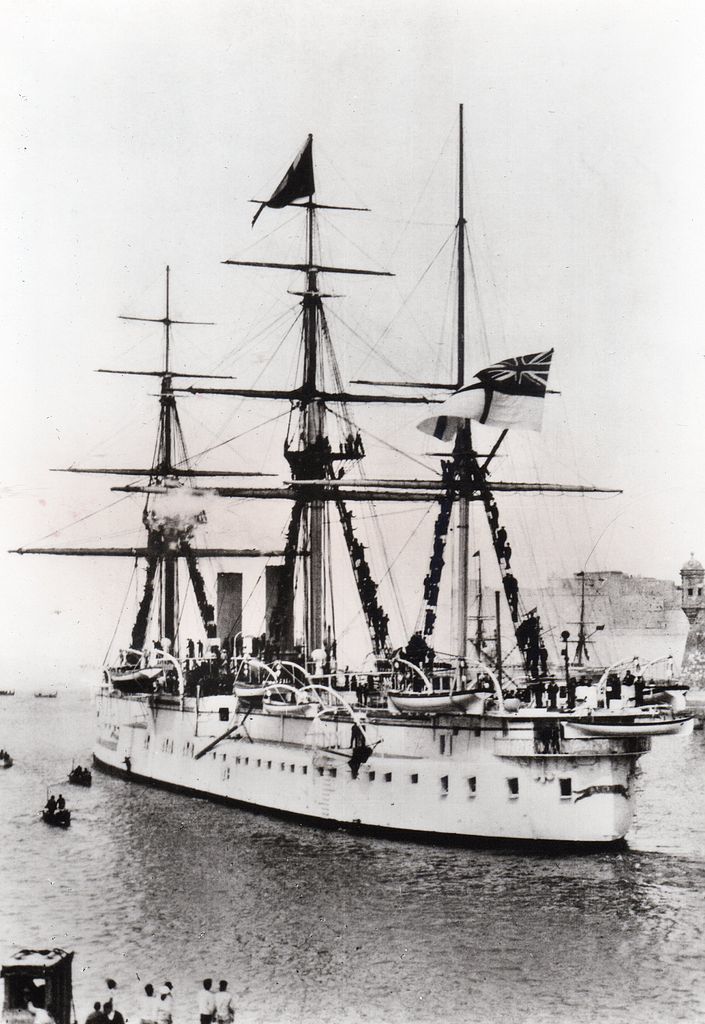 Britain tested the waters soon with the construction of two dispatch vessels, HMS Iris and Mercury, all-steel, laid down in 1875–1876. The Royal Navy lagged behind because of the trust placed in the British Bessemer process, which produced too many imperfections for large plating. On ballistic tests, it was found too brittle. The British also tested a combined wood and iron ‘sandwich’ armor on HMS Inflexible (1876).

Compound armor seemed the solution, by fusing steel with iron plates. This compound armor appeared by the 1870s for the turret of HMS Inflexible, and the whole armor on HMS Colossus (1882). At that stage, both French and German navies adopted the process, licencing the ‘Wilson System’ for fused armor.

It’s on 1871 that maritime engineer Louis de Bussy proposed to the Navy Minister (Ministre de la Marine) plans for a battleship made in steel, replacing iron as the primary protection material, and structure. Different thicknesses of steel were provided according to the specifications, reducing the draft. Plans were accepted in 1873 and followed by an order registered in an ambitious five years naval plan, including the Devastation class, Courbet, and the six coastal ships of the Tonnerre and Tempete classes.

The Battleship Le Redoutable was laid down at the same time as HMS Alexandra, also a very innovative central battery ironclad. Since the 1870 Swiftsure class, she was sheated in wood and copper, not iron, was about the size and tonnage of Redoutable, with heavier armament, innovative (but still iron) protection, and was the first ironclad with vertical coumpound engines, making her slightly faster than Redoutable at 15.09 knots.

Redoutable in Brest’s drydock, by Neurdein

This new central battery ironclad saw a beam radically increased with the trademark “pear-shaped” section, or tumblehome which was tested then, assumed to increase stability as a gun platform and made a more predictible roll. She also had her draught reduced due to this increased buoyancy at the waterline.

The central battery was much shortened, with just four main guns mounted at its corners on rail to give them maximal arc of fire. The very marked tumblehome combined to the reduced central battery meant only one main gun could fire at any time.

As said above for the first time, steel was used for most of the hull construction, notably bracing and armour, though wrought iron covered still much of the structure. There was a double bottom but watertight longitudinal bulkheads. The steam steering engine was placed above water. Metacentric height was remarkably low at 0.85m.

Yard Model of the Redoutable, now at the Paris Marine Museum

Le Redoutable had a complete belt, which ran from 1.5m (4.92 ft) below to 1.5 m above the waterline. This main belt was 350 mm amidships (13.7 in), tapering to 220mm (8.66 in) forward and to 230mm (9 in) aft, as well as at the lower edge. This was not a steel belt, just classic wrought armor as the rest of the ship. Steel was used for construction only as its properties at the time were not judged sufficient to provide an adequate peropective plating.

The armour of the battery upper edge was situated 5.8 m above the waterline. It was composed of a 60mm (2.3 in) deck, at the belt upper edge outside, the battery. There was no armoured roof.

Her machinery was not revolutionary. She followed the previous practice, but with not a single, but two Horizontal return connecting-rod compound steam engines, mated on two shafts, fed by eight oval boilers; In total, she developed 6,700 ihp (5,000 kW) (vs. 4,700 PS; 3,400 kW (4,600 ihp) on the Colberts). As a result she was the fastest French ironclad ever built, reaching 14.5 knots (26.9 km/h; 16.7 mph) on trials, reduced to 14 in normal conditions, as the Colberts. The new tumblehmome shape and greater beam (19.76 instead of 17 m) made it possible to place two steam engines side by side. She was reboilered in 1894 (see later).

Deck 27 cm behind its gunshield aft.

The four battery guns were of a lighter, lower velocity pattern than the four unarmoured upper deck ones later added, which were mounted under the forecastle, at the stern and on either beam in half-barbettes. it’s hard to find good informations about these ordnance. Navweaps only starts with the 274 mm/40 model 1896 and /45 model 1887. However a site about Sere de Riviere Fortifications which also used it states:

The 138 mm guns were slow, and later replaced by 100 mm Canet guns in 1894, equivalent which had twice their rate of fire, placed on the upper deck. Magazines for the battery guns were noted overheated by the machinery spaces below, something which was corrected for subsequent ironclad designs. Designed in 1889, the Schneider 100 mm Canet was introduced in 1891 was a modern and rapid piece of ordnance, widghting 1,700 kg (3,700 lb)

In the 1880s, Redoutabkle was re-equipped with a standard French Hotchkiss 47mm and up to twelve 37mm Hotchkiss revolving cannons in 1894, fitted mainly on the two military masts fighting tops (eight) for anti-TB defense, and the remainder in the bridge around the main funnel and decks.

Little info is available; Submerged tubes, two in the broadside, one in the bow, one in the stern. These were very early torpedo models and such small caliber was barely capable of defeating an armour belt.

The ironclad was commissioned a first time on 22 November 1878 for trials, then on 31 December 1878 after these for active service and after intensive training she was sent to her first assignation, on 8 February 1879, at Toulon, the main base for the Mediterranean fleet, with the bulk of the French Navy. She is assigned in particular to the “Escadre d’évolution” or “fast squadron” until 1889. This was the lite battle squadron within the fleet, equipped with the latest and best French ironclads and cruisers. From 1889, she was assigned to the eastern Mediterranean squadron. She made a trip to France with an Algerian diplomatic party 1889 (Cherif envoys).

She was sent in September for her major refit in Toulon, and afterwards was sent to the Atlantic squadron based in Brest. Among others, her armamement was completely revised, she had new military masts fore and aft while her rigging as deposed, and modifications made to her armor, with add-ons to protect her from parabolic fire. All in all, these additions made her heavy compared to her original design. The strain would have been immense if all of her eight main guns were would have fired at the same time. In 1894 she was also completely reboilered, with a more modern setup: She received brand new 8 cylinder boilers. However if it’s augmented her output it’s not clear her speed rose due to her larger displacement.

She made the first tests of transmission of electric radio signals (wireless telegraphy) in the harbor after refit. Her captains were, in order, in 1879 when completed and trialled, Captain Rallier, followed in 1881 by Captain Behic, in 1883 by de Boissondy, 1885 by de Slane, 1887 by de Libran, 1889 by Dieulouard and in 1892 by Captain Chateauminois.

From the time she was out of drydock for her post-refit trials, she was commanded by Captain Billard from 1895. Her was replaced in 1896 by Captain Mallarmé and from 5 September 1898 by Captain Esmez. By that time she had served in the same squadron but was scheduled to steam for the Indian Ocean. She was to take service in Asia and the Indian Ocean, and was based for some time in Saigon. For her first trip this year, she stopped in Suez, Djibouti, Colombo, Singapore. At the time, Courbet and the French fleet were in full colonial conquest in Anam and Tonkin (Future “indochina”).

In 1900, due to the Boxer revolt in China, she is sent in the far east, making a long trip from Cherbourg to the Taku Forts at the avergage cruise speed of 12 knots, as flagship, carrying the Admiral Pottier flag. On 21 July 1900 her new captain was Captain Neny, replaced in 3 December 1901 by Duroch. She was based in Saigon and operated notably in the Along Bay in 22-26 january 1903. From 15 October 1903 Captain Poidloue took command.

She became a permanent par of the Indochina naval division in 1905. In 1906 Captain Passerat de Sillans took command and on 5 December 1907 Captain Drouet, replaced in 1909 by Lieutenant Arnauld, but at the time she was in limited service with a reduced crew. She was eventually placed in reserve until 1909 and stricken on 9 mars 1910, in Saigon. She was broken up in situ in 1912-1913. This was quite a long service life, in part explained by her partial steel hull.

Engraving of Redoutable as completed, with rigging

On several French ironclads and battleships

The construction of ironclads

Colorized photo of the ship after refit in 1899 – Postales Navales

Saibène, The Redoubtable, Part I, Warship International, No 1, 1994 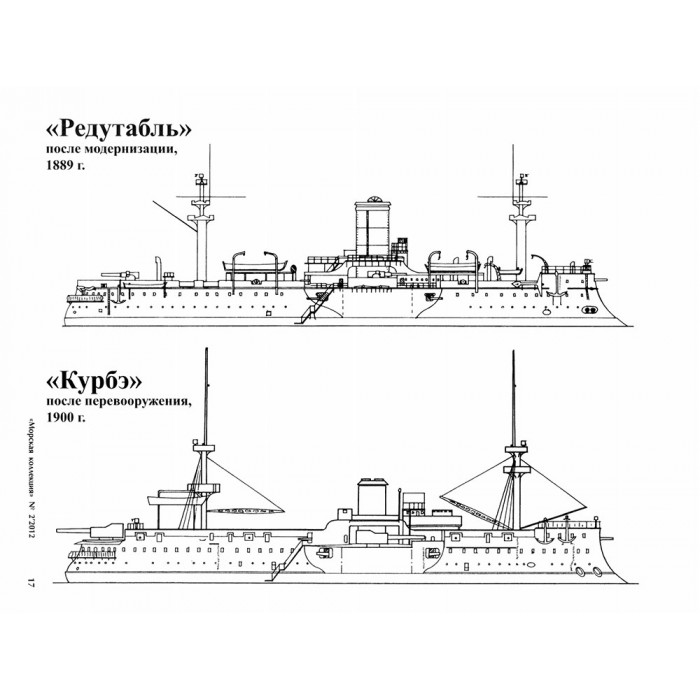 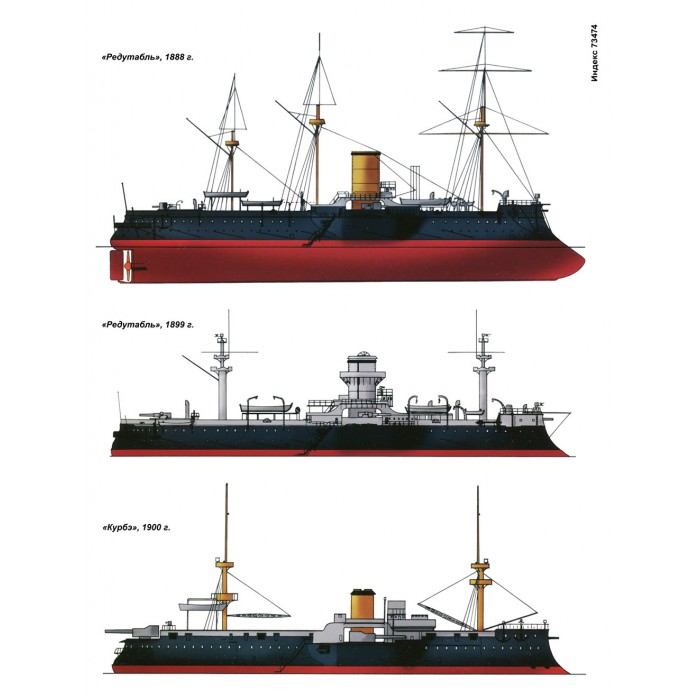