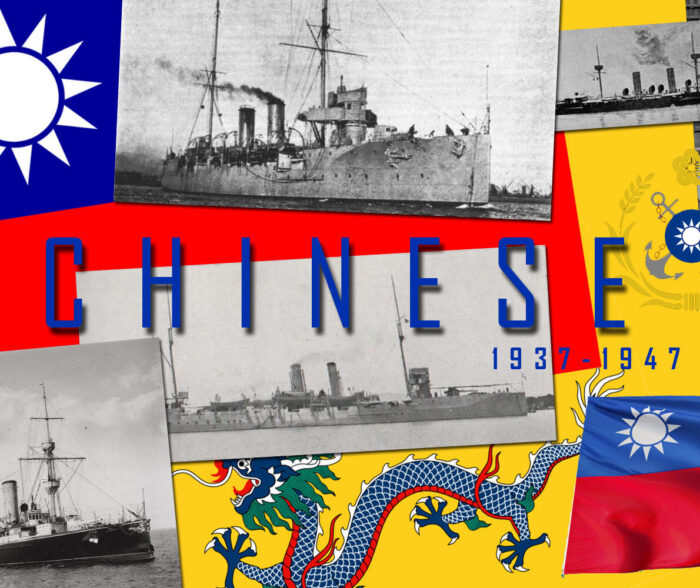 A condensed history of the Chinese fleet

Although at the end of the Middle Ages China was an indisputable great maritime power – at the time of Zheng He‘s expeditions – in the nineteenth century, Westerners had no trouble imposing their trading posts and exploiting vast coastal territories. Chinese only naval forces consisited of junks armed with medieval-style muzzle-loading cannons more noisy than effective, light years from the steel rifled guns of the Westerners. Several naval skirmishes saw the Europeans victorious with a wide margin. From 1865, however, and with the help of the Americans and the French, the Foochow and Kiangnan shipyards were able to deliver the first Chinese armed steamers. From 1875, the Empress authorized the establishment of a naval budget for the maritime provinces, and minister Li Hung Chang was the first to set up a modern navy in 1880. 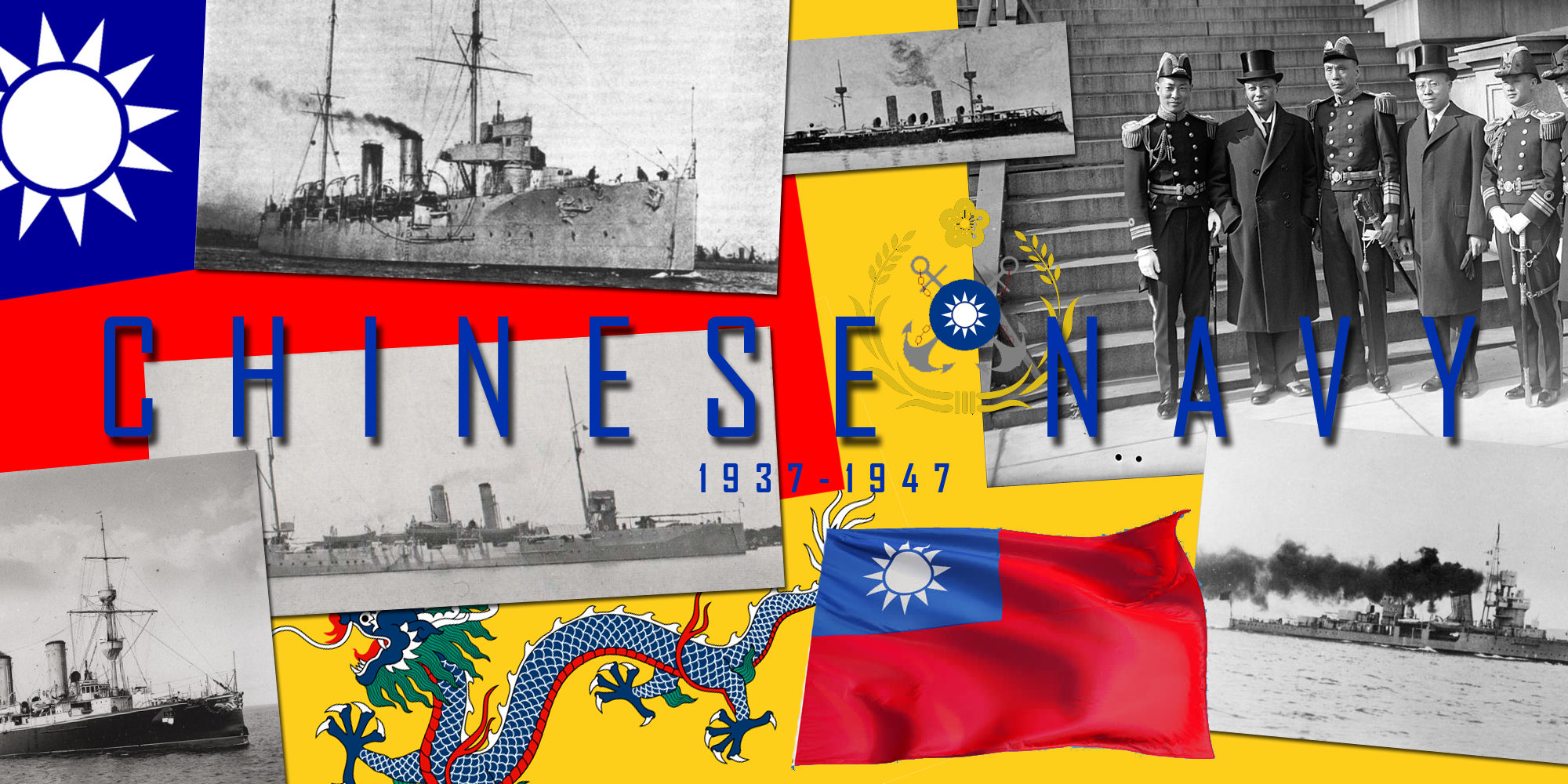 In 1894 took place his first major confrontation, against the Japanese fleet at Yalu. Although defeated, the behavior of the Chinese crews was exemplary and encouraging for the future. In 1898, an important naval plan was put in place including 5 cruisers and many light units. However, the general condition of the ships after 1895 had deteriorated: Unrevised machines, lack of maintenance of the hulls and structures, were the direct result of the corruption and disinterest of provincial governors. As such, the Chinese fleet was at the beginning of the century organized into four fleets: the North Fleet, based in Chihli, the southern fleet, based in Shanghai and Nanyang, that of Foochow (Fukien, Chekiang), and that of Canton (Kwantung, Kwangsi).

From 1908, after the Boxer War and the chaos that ensued, a vast rearmament and reorganization plan was orchestrated, with the creation of three fleets (North, South and Central), each organized as a squadron comprising a projected 14,000 tons battleship, and 12 to 20 cruisers of different tonnages in four classes. Nevertheless, the command of these three fleets remained local, and the commanders of the latter, who could possibly “cooperate” together, had to answer only in front of the imperial court, not very aware of maritime things.

In 1909, a naval headquarters office was created. Naval advisers went abroad to study the needs of the fleet. they came back with a first plan “reduced” over three years, including three modern training cruisers, 8 gunboats, a destroyer and a transport. A second 7-year plan included 8 battleships, 20 cruisers, 30 destroyers and torpedo boats, plus dozens of river gunboats.

In 1911, it was the beginning of the Chinese revolution. The starting point was the mutiny of the troops at Wushang on October 10, followed by an uprising that ended the multi-secular reign of the Manchu dynasty. The young emperor Pu-Yi was forced to abdicate in 1912 and was kept in his palace until his majority. The first president of the new regime was Marshal Yuan Shih-Kai.

The commander of the revolutionary naval forces, Huang Chung Ying, became the minister of the navy. But the Chinese Republic had empty pockets after two years of chaos and struggle, and the ambitious naval plan of 1909 was canceled. The government choose instead to stick with the first 3-year program. Ships under construction abroad were even offered for sale, but only Greece was interested in the future Hellé. But while the president was multiplying unrealistic programs, the various fleets were falling into the hands of local warlords. Th Chinese fleet existed only on paper in 1914. In August 1917, China declared war on the central empires. She took this opportunity to capture German and Austrian commercial ships and modernize the aging trade fleet. It had, however, taken no part in the attack on Tsing Tao, the only German Pacific port, leaving the naval forces of Japan and the Commonwealth to hunt Von Spee’s squadron. Subsequently, the escape of the new president, Sun Yat Sen, caused the return of Canton to the European forces to protect it from nationalization. European warships thus were anchored there from 1924, and until the Japanese invasion in 1937.

No Battleship: The two 1885 Ting Yuen class barbette ironclads has been captured or destroyed during the Battle of Yalu in 1895. All 16,000-ton pre-dreadnought project were never completed.

The Republic of China Navy: Liu Guanxiong (1861, Fuzhou, + 1927, Tianjin), a Chinese Admiral from the late Qing dynasty became the Navy Minister of China from 1912. He held this post until 1916 and again in 1917-1919. A graduate of the Navy College of Fuzhou, he learned his trade in the Royal Navy. He doubled as Commander-in-Chief of as the Republic of China was founded. He cumulated this with the Minister of Education and Transportation in 1912-13. Yuan Shikai‘s became Emperor in 1915 and named him a Duke, but after his death, Liu Guanxiong allied with Duan Qirui. The latter refused to validate the abolished constitution and the Chinese fleet soon became fractured, with splitted loyalties.

The Chinese Navy most troubled years:

In 1915, as the fleet was slowly reorganized, there was a short-lived attempt by statesman and general Yuan Shikai in late 1915 to revived the Empire, under modernized basis. Early in 1916, this dream collapsed. Yuan became the Hongxian Emperor but amounting opposition from the Chinese republican cause. Despite the ousting of Yuan, that was the source of many years of turmoil. This opened the pandora box of a period of conflict between various local warlords, generally known as the “warlord era”. This prevented any chance for the Navy to be unified, organized, but the fleet was nevertheless reinforced with some gunboats: 2 class Chiang Hsi (high seas), 3 class Chung Chung, Hai Yen, 2 class Hai Fu, 2 class Hai Hung, and 2 Hai Ho class.

One of the worst tragedies of the time was the sinking of SS Hsin Yu in 22 April 1916. This Chinese Army transport ship, displacing 1,629 ton and dating back from 1889 carried over a thousand enlisted men and officers when caught in a thick fog on her way to Foo Chow, south of the Chusan Islands, she was accidentally rammed by the cruiser Hai Yung . She sank rapidly and carried with her nearly all the crew, the survivors being rescued way too late; In total nine sailors and 20 soldiers survived.

The Navy fell into a state of collapse, with no maintenance, but for the ships held by various warlords. Sa Zhenbing in 1920 became Premier of the Republic of China, and as a graduate of the Fuzhou Naval Academy, and student of the Royal Naval College, Greenwich, he was a veteran of the Battle of Weihaiwei in 1895. He became Admiral-in-Chief of the Beiyang, Nanyang and Guangdong Fleets. During the Wuchang Uprising of 1911 he was tasked to sail to Wuhan to suppress the revolutionaries, but after arrival, swapped sides. He became nonetheless Minister of the Navy under Yuan Shikai. He became Governor of Fujian Province from 1922 to 1926 and in 1949, instead of joining the ROC, became a communist. For the interwar, see the Chinese Navy in WW2 post.