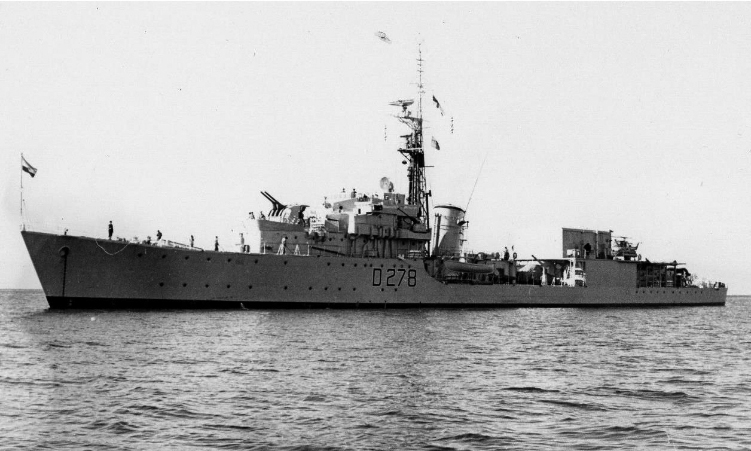 On 29 March 1950, South Africa received its first destroyer HMSAS Jan van Riebeeck (former HMS Wessex), at the HM Dockyard in Simons’s Town, with the British High Commissioner Sir Evelyn Baring officially handing the vessel over to the Union Government. Nearly three years later, the South African Navy would acquire her sister ship HMS Whelp, which was commissioned into the South African Navy on 23 February 1953 as SAS Simon van der Stel, with the letters HM being dropped from the names of SA naval vessels in June 1952.

The main task of destroyers at the beginning of World War Two was to protect friendly vessels from enemy vessels, such as other destroyers and even submarines. To accomplish this, they needed heavy armament in the form of both torpedoes and guns. The Wager class were the last British destroyers to be fitted with 4,7-inch guns. They were fitted with four single 4,7-inch mountings, two forward and two aft. Working in conjunction with the guns the vessel was equipped with a combined dual-purpose HA/LA director with a Mk III range finder incorporated on the bridge.

Secondary armament includes two quadruple 21-inch torpedo launchers, one twin 40mm Mk IV Hazemeyer Bofors (one quadruple two-pounder pom-pom anti-aircraft mounting fitted in Wessex and whelp) and four twin 20mm Oerlikons. Anti-submarine armament includes two depth-charge throwers on either side of the deckhouse aft and two rails at the stern. The Wager class were also the first destroyers in its entire class to be fitted with a heavy lattice foremast with Type 276 radar.

The Wager class destroyers were powered by two Admiralty 3-drum boilers, which were positioned in separate boiler rooms, back-to-back, enabling the uptakes to be turned into a single funnel. The steam turbines developing 40 000 horsepower were arranged in two sets in a single engine room and drove two shafts through single reduction gears positioned in a separate gearing room abaft the engine room. These vessels could achieve a top speed of 36,75 knots and travel a total distance of 4 680 nautical miles at 20 knots.

Two years after commissioning, the SAS Jan van Riebeeck was most appropriately selected to represent the SA Navy at the Van Riebeeck festival held in Cape Town in April 1952 to commemorate the 300th anniversary of the arrival of Jan van Riebeeck at the Cape. After the festival, she underwent a refit in Simon’s Town before returning to Durban, the home port of the SA Navy in those days. During the latter half of 1952, she conducted a month-long cruise to East African ports, including stops at Diego Suarez, Mombasa and Dar es Salaam. In early 1953 she sailed from Durban to Simon’s Town, where she was laid up in reserve to provide a crew for the commissioning of SAS Simon van der Stel. This became the norm throughout their long service with the South African Navy.

In 1954, a little over a year after being handed over to South Africa, the SAS Simon van der Stel, under the command of M R Terry Lloyed, made a historic cruise to northern waters, which lasted nearly five months. SAS Simon van der Stel sailed from Durban on 14 July 1954, making her first stop in Cape Town to top up with fuel and supplies before heading to Walvis Bay. She proceeded to Freetown in Sierra Leone, followed by Dakar, before arriving in Portsmouth on 31 July 1954. After spending two weeks alongside the British battleship HMS Vanguard in Portsmouth, SAS Simon van der Stel also paid a highly successful visit to Rotterdam, being the first and to date only South African war vessel to visit the Netherlands.

After the visit to the Netherlands, SAS Simon van der Stel returned to Portsmouth and then proceeded to Londonderry in Northern Ireland before going up the Clyde to Glasgow, which was later to become home to many South Africans involved in the construction of three Type 12 frigates built there during the early 1960s. On the return voyage to South Africa, SAS Simon van der Stel escorted the newly acquired Ford class Seaward Defence Boat SAS Gelderland. The two vessels left Portsmouth on 21 October 1954 and after encountering bad weather with waves continually breaking over the bridge of the much smaller SAS Gelderland, the decision was made to visit the French naval port of Brest to wait out the bad weather before continuing.

SAS Simon van der Stel and SAS Gelderland continued on their journey, making stops at Lisbon, Las Palmas, Dakar, Abidjan, Pointe Noire, Walvis Bay, Cape Town and Port Elizabeth before finally arriving at Durban on 8 December 1954. SAS Simon van der Stel has covered a distance of 17 200 nautical miles and has been away from her home port for a total of 147 days. After four years in commission, SAS Simon van der Stel was decommissioned on 18 February 1957 and joined her sister ship in reserve.

Whilst both ships were laid up, the striking power of the SA navy came under intense review. By this time, the rapid advances in submarine designs and technology meant the two destroyers were not as capable anymore of countering enemy submarines. The use of shipborne helicopters with anti-submarine capabilities would appear to be the answer; thus plans were drawn up to convert both ships into fast, helicopter-carrying anti-submarine escorts. The first ship to be taken in for modernisation was SAS Simon van der Stel, which was taken in hand by the SA Naval dockyard in Simon’s Town in 1962. SAS Simon van der Stel was recommissioned on 27 February 1964 when work started on the modernisation of SAS Jan van Riebeeck.

The conversion, which gave the ships unique silhouettes, included fitting a flight deck and a hanger for two Westland Wasp HAS Mk 1 helicopters for standoff weapons delivery. The main armament, four single 4,7-inch guns were replaced by 4-inch guns in twin Mk 19 mountings, one forward and one aft. SAS Simon van der Stel initially shipped a modified gun-director system, but this was later replaced by an Elsag NA9 fire control system, similar to that fitted in SAS Jan van Riebeeck during her refit. The operations room of each ship was also enlarged, and a great deal of new electronic equipment was fitted, along with new communications systems, with the Type 293 search radar and masthead being retained.

On SAS Simon van der Stel all the secondary armament was removed and replaced by four single 40/60 Bofors, two fitted on each side of the bridge structure and two on the flight deck. Both depth charge rails were retained, as well as two of the four depth charge throwers. One of the two quadruple 21-inch torpedo launchers was removed in order to make space for the flight deck, the remaining torpedo launcher would be removed at a later stage.

Once the modernisation was completed for the SAS Simon van der Stel, the vessel remained in commission for just over a year before being placed in reserve in March 1965. This was due to a manpower shortage, brought about by the commissioning of three new Type 12 frigates (President class frigates) by the South African Navy. The SAS Jan van Riebeeck would also end up in the same position as her sister ship, after completing its trials in July 1966, being placed in reserve due to the manpower shortage, as a result of the new frigates being commissioned.

After numerous flag-showings and training cruises, SAS Simon van der Stel was finally decommissioned at sunset on 27 March 1972, with her role as a training vessel being taken over by her sister ship SAS Jan van Riebeeck, which has gone through an extensive electronic and general refit in March 1971 and being recommissioned for limited service on 12 April 1972. With South African Navy flag showings not taking place as often anymore the SAS Jan van Riebeeck would once again be placed in reserve in late 1975 after only a few years of serving as a training vessel.

The end of the Wager class

By the time SAS Jan van Riebeeck was placed into reserve in 1975, the SAS Simon van der Stel had temporalty been reactived after its decommissioning. With only a skeleton crew, the vessel was escorted to Durban by the SAS President Kruger in early 1975, where it was planned to refit the vessel at the newly reopened Salisbury Island Naval Base. However, it was subsequently found that the general state of the ship was such that it would not be economically viable to refit the vessel.

In late 1976, SAS Simon van der Stel was stripped of all her useful gear before finally being scrapped by Sandock Austral at their Bay-Head yard. Despite her lowly end, her hanger structure eventually became a temporary paint shop at the yard, a sad reminder of a once proud ship. A few years later the SAS Jan van Riebeeck would also meet its end and be stripped of all her useful equipment. On March 1980 she was used as a missile target some sixty nautical miles south of Cape Point. Here she was sent to the bottom of the ocean in an exercise to prove the effectiveness of the weapon system fitted to the SA Navy’s new Minster class Strike craft.

The thirty-six-year-old vessel was torn apart by a single Skerpioen (Scorpion) surface-to-surface missile fired by the strike craft SAS Jim Fouche from over the horizon, which struck the vessel amidship leaving a huge hole. As a result of her light condition and the calm seas prevailing, it was necessary for additional participating units to engage her before she sunk. Her final moments above the waves obscured by dense smoke.

SAS Jan van Riebeeck after being hit by a Skerpioen missile 1980 (D. Collopy)