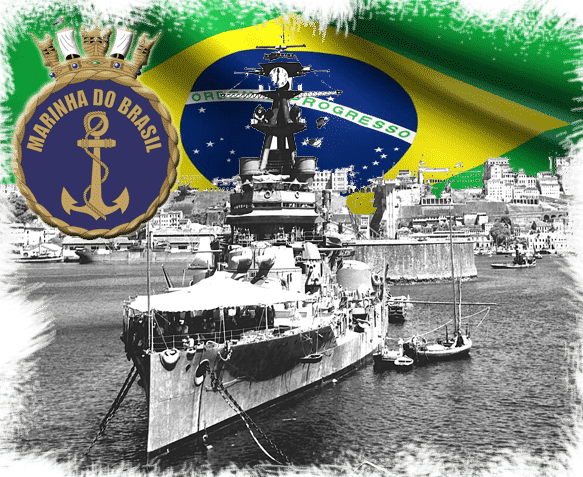 History of the Brazilian Navy It took its origins from the the transfer of the Portuguese monarchy to Brazil in 1808 during the Napoleonic wars, as personnel and ships became the core of this local Navy, later to be passed on to Brazil.

With the independence of the country Captain Luís da Cunha Moreira became the first minister of the Navy on October 28, 1822. Soon Lord Thomas Alexander Cochrane was made commander and then “first admiral”, at the head of a mixed force of a single ship of the line, four frigates, and 33 corvettes, sloops and gunboats. This was called the Imperial Brazilian Navy, then under Emperor Pedro I. This navy fought on 4 may 1824, during the revolt in Pernambuco and prior to the Cisplatine War. Imperial Marinheiro, Brazilian mixed cruiser. In 1870, the Imperial Brazilian Navy was the fifth largest in the world.

The Imperial Brazilian Navy in training.

In the following reign of Pedro II from the 1830s to the 1880s, the Brazilian Navy reached in maximum, ships being built with modern rifled guns at the Naval Arsenal of Rio de Janeiro, Salvador, Recife, Santos, Niterói and Pelotas. They fought numerous revolts and battled their old enemy the Argentinians, especially in the long and bloody Paraguayan War (1849-70).

It was during that time that Brazil ordered about twenty ironclads. In the process, the Navy all but destroyed the Paraguayan navy in the Battle of Riachuelo. In the 1870, Brazil achieve the fifth rank in the world with 94 modern warships, including modern ironclads and coastal battleships.

However the fall of the Imperial regime in 1889 was followed in 1893 by a revolt of the Armada, largely monarchist. Things settled as neighboring Chile and Argentine raised their fleets to a level that threatened Brazil. The new government left the navy indeed without funds, and it fall in quality and numbers well beyond its previous rank.

However a very important naval law was passed on 30 December 1905, ordering no less than three small battleships, three armored cruisers, six destroyers, twelve torpedo boats, three submarines, and two river monitors. Later on the order was modified when it was learnt about the Dreadnought in construction: The armoured cruisers were dropped and instead two dreadnoughts were ordered in 1906 and that was the start of a famous naval arms race with Argentina and Chile.

The Marina Brazileira in 1914

It was an important fleet in 1914, first in tonnage in South America, ahead of Argentina and Chile. This navy owed this supremacy to the ambitious choice of having Dreadnoughts even though this type had just made its appearance within the English fleet. At the turn of the century, Brazil was entering a golden age of prosperity unique in South America.

Controlling the world market for coffee and rubber, Brazil benefited from large investments from European and American companies and real financial empires were created, as well as new towns, sometimes in the heart of the jungle. Political agitation which saw the early republic born and border wars has come to an end, and people founded great hopes in the century to come.

In 1905, the government set up a vast program to give the country the vest fleet in South America. In a very short time, two Dreadnoughts, two cruisers, ten destroyers and three submarines were ordered, mostly in UK. The order of the two dreadnoughts Sao Paulo and Minas Gerais caused a great deal of concerns worldwide in 1906: These ships were on paper much more powerful than the HMS Dreadnought and even her successors in the yard.

But moreover large traditional maritime powers such as France and Russia still don’t have even themselves ordered such ships. There were rumors, especially about the possibility that these ships has been secretly ordered by Germany through Brazil for a planned resell.

These speculations were based on the fact that German investors were present in strength in Brazil and there was real paranoia in the press and in the population in UK about the ongoing battleship race with Germany. In 1910, when Brazil received its battleships and nothing else happened, the government announced the order of the Rio de Janeiro (future HMS Agincourt). With these three major units, Brazil could have grow as the largest maritime power of the South Atlantic. But ordered too late, and suffering the consequences of an economic crisis, the Rio de Janeiro was sold to Turkey, and then requisitioned by the RN at the time of the outbreak of the great war.

Moreover, on November 22, 1910, a mutiny erupted on Minas Gerais and political unrest accompanied a sudden economic recession. Future plans to strengthen the fleet were cancelled for long. The mutiny was relatively similar to the one that occured a few years before on the Russian potemkine, over living and working conditions of sailors. It was called the revolt of the Lash and died down after reforms were passed on the 26th of November 1910.

The Marina Do Brazil in WW1

In 1914, Brazil was nevertheless at least on paper lining up a powerful fleet, capable of forbidding access to the southern Atlantic to any German squadron. But due to both a poorly digested economic crisis and an isolationism doctrine inherited from US Monroe policy, Brazil took a cautious position of neutrality, especially in regards of exports still vital for both sides for local economy.

From 1916 onwards, however, U-Boats increasingly attacked Brazilian merchant ships, suffering at some point a total blockade of its coffee exports. In 1917, with unrestricted submarine warfare traffic losses intensified, and Brazil eventually declared war on October 24, 1917 on Germany.

A squadron was set up to operate in northwestern Africa, consisting of 2 cruisers, 4 destroyers and support ships. But it was only in operation three months before the capitulation. In southern Atlantic the rest of the fleet participated in convoys escort duties. The two battleships were sent for modernization to an American shipyards in order to integrate these into the British Grand Fleet, but the war ended before they left the shipyards.

The treaty of Versailles recognized war reparations to Brazil which consisted of two old destroyers and 43 merchant ships flying German flag, interned or captured during the war.

Notes:
In 1916, the Italians delivered the supply vessel Ceara to Brazil. The battleship Rio was then sold under construction to the Turks and then requisitioned.

The three Javari were requisitioned by the RN and soon entered service in British colors as the Mersey, Severn and Clyde, bombarding German Flanders batteries and positions. The Severn served in Africa and fought the German cruiser Königsberg. Identification Silhouettes of the Brazilian Navy in 1914. Broadside from the Minas Gerais in exercizes