The First American Aircraft Carrier (CV-1)
This was not before 1920, barely one year after the Japanese with their Hosho and two years after the HMS Furious, that the US Navy ventured into the next capital ship of the century. Born as a fleet collier, and first turbo-electric-powered ship and named after Samuel Pierpont Langley, an American aviation pioneer, the new ship was partially converted as a test ship and later as a complete deck ship, mostly used as a transport and training ship although she was lost in combat during WW2. This particular class of fleet collier (bulk coal cargo carrier) was developed for the needs of the large dreadnought Navy the white house "hawks" and Teddy Roosevelt, fuelled by Mahan's doctrine, asked for. It was to extend the capabilities of the fleet on a global sphere, a reflection of the 1898 victory and overseas new bases. But this particular class of Colliers was also famous at more than one level.

Forever associated with the Bermuda Triangle

The AC-1 to AC-4 serie of ships designed in 1911 and relatively conventional but USS Jupiter alone was the first to showcase a turbo-electric propulsion in the US Navy. Also this class was the most associated and researched in the field of paranormal, as three of these (USS Proteus, the lead ship, USS Cyclops and USS Nereus) were lost in the same Bermuda Triangle in both wars. It is strongly believed because of freak waves and particular atmospheric conditions here.

For her first cruiser, she embarked a USMC detachment at San Francisco, California, to be landed at Mazatlán, Mexico, on 27 April 1914 during the days of the Veracruz crisis. She departed for Philadelphia on 10 October and went through the Panama Canal on Columbus Day, first vessel to transit from west to east. She served in the Atlantic and Gulf of Mexico, attached to the Atlantic Fleet Auxiliary Division, where her three other sister-ships were lost. She sailed for Norfolk, Virginia and arrived on 6 April 1917, assigned to the Naval Overseas Transport Service. She carried cargo to France in June 1917 and November 1918. She also carried a naval aviation detachment to Great Britain, first US aviation detachment to arrive in Europe. Commanding officer Lt. Kenneth Whiting became USS Langley's first executive officer later. Back to Norfolk on 23 January 1919 she was back to Brest, France on 8 March 1919 to coal the ships carrying back veterans. On 17 August she was transferred to the West Coast for later conversion to an aircraft carrier authorized on 11 July 1919. For this, she joined Hampton Roads, Virginia and was decommissioned on 24 March 1920. Conversion as an aircraft carrier (CV-1)

Converted started soon into the first US aircraft carrier at Norfolk in Virginia, for experimenting the seaborne aviation concept, nine years after the first American pilot took off from an American armoured cruiser. On 11 April 1920, Jupiter has renamed Langley, with the hull number CV-1. Recommissioned on 20 March 1922 her first commander was Kenneth Whiting.

Design of the USS Langley

The collier was ideally suited for this task with its large holds which can be adapted as hangars, although the main one was almost out on open air, below the main deck and below the new flying deck that was built atop. The latter was wooden-built, but partial until 1939. It was extended full length during WW2. In its initial state, it only allowed planes to take off. There was just one squared lift in the center and at first some makeshift arrestor cables with sandbags, later refined as hydraulical systems. The exhaust were truncated into two pipes located in a left-side hull extrusion. But there was no island, like other converted designs of the time such as HMS Argus and IJN Hosho. The bridge was located to the forward part of the deck. 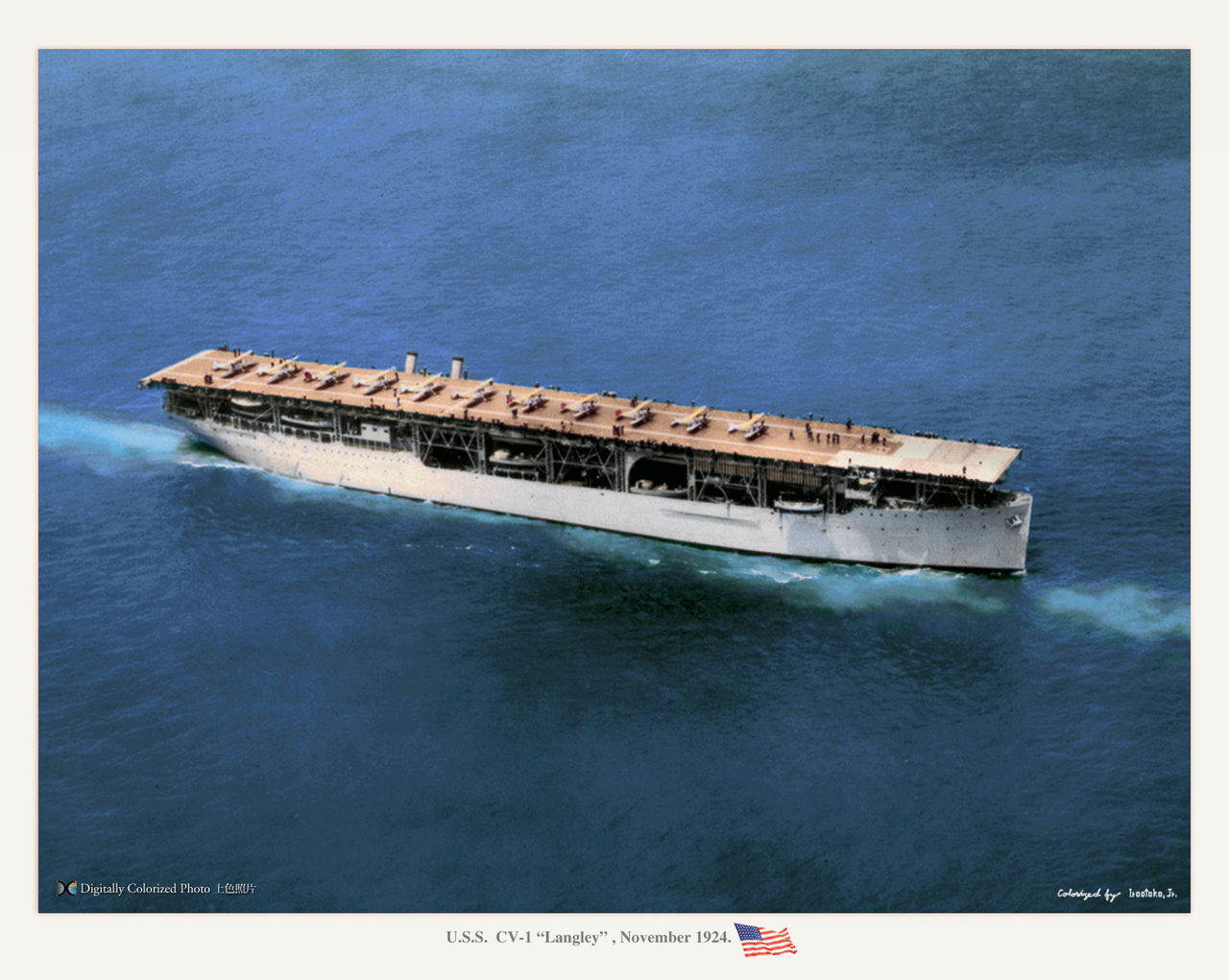 Armament-wise, the Langley received four 5 in (127 mm)/51 cal guns which replaced the 4 in (102 mm)/50 cal guns of USS Jupiter. These were standard destroyer-type quick-firing guns, offering some protection against destroyers. She carried as much as 36 between the hangar and main deck. In addition to an elevator, she received right from the beginning a catapult.

For the anecdote, the Langley (as well as planned on the Lexington and Saratoga later) had a pigeon house to deliver messages, installed on the stern between the 5-in guns to be carried aboard seaplanes operated from the aircraft carrier. They were trained at the Norfolk Naval Shipyard but one day off Tangier Island, but the whole pigeon flock roosted in the cranes of the Norfolk shipyard and never went back again. The experiment was called off and their former house became the executive officer's quarters. An important topic, as the ship carried almost all types of USN planes in service from 1920 to 1942. The first generation was composed of mostly light and small 300 hp fighters/trainers such as the VE-7F. Only 11 were delivered for the US Navy, with flotation gear integrating inflatable bags to help keep the plane afloat when ditching. The VE-7 prototype first flew in 1917 and it was propelled by an Hispano-Suiza engine. The Aeromarine 39 (photo) was another trainer designed by a Navy "pure player" also declined into a floatplane. In all 150 were built in several versions. With a 100 hp propulsion it was not blazing fast but stable, which was all that was required for young pilots training to land on a carrier. The Curtiss TS-1 fighter made in collaboration with Naval Aircraft Factory was fresh in 1922, and quite a progress as an all-metal framing in duralumin, and 46 were delivered. The Douglas DT-2 (photo) was the first ship-borne torpedo bomber of the US Navy, which first flew in 1921 with a V-12 Liberty rated for 450 hp. It was produced until 1929 and also used by the USMC. The Boeing F2B was a famous naval fighter, all metal, which first flew on 3 November 1926. Only 32 were delivered, some exported (Japan, Brazil). It was the basis chosen by Lt. D. W. "Tommy" Tomlinson CO of VF-2B in 1927 for the first U.S. Naval aerobatic team. The PW-9/FB or FB-5 fighter in 1927 was also tested on the Langley. The Curtiss F6C Hawk was the navalized version of the land-base fighter, in service until 1932-33 and many converted as floatplanes. The Douglas T2D-1 was a large twin engine torpedo-bomber used as a floatplane until 1937, and served with VT-2, making numerous trials onboard Langley.

The Boeing model 14 or F3B-1 was also used and operated from Langley, made of corrugated aluminum and propelled by a radial Pratt & Whitney R-1340-80 Wasp rated for 425 hp. The Martin T4M which was delivered from 1928 t the USS Saratoga and Lexington as another single-engine torpedo-bomber, tested on the Langley and using a 525 hp Pratt & Whitney Hornet, and in service until 1938. However one of the most common fighter was the Boeing F4B, developed from the P-12 in 1930 and exported. More than 211 of all naval versions were delivered, the last one in 1938 being a radio-controlled target called the F4B-4A. In 1941 they were still used to train mechanics. The rare Pitcairn XOP-1 prototype autogyro also made tests onboard USS Langley. The Martin BM-2 was a sturdy torpedo-bomber of 1930 propelled by a Pratt & Whitney R-1690-44 radial engine rated for 625 hp (466 kW), only 16 produced, after the prototype was tested onboard USS Langley. It was retired in 1939.

The USS Langley in action

USS Langley, Saratoga and Lexington at Puget Sound before the war, circa 1930

On 17 October 1922, Lt. Virgil C. Griffin piloted took off from USS Langley on a Vought VE-7. Nine days later, Lieutenant Commander Godfrey de Courcelles Chevalier performed the first landing, with an Aeromarine 39B. And on 18 November, Commander Whiting was catapulted from for the first time. It was also the first time worldwide that a plane was catapulted from an aircraft carrier. From then on tests were systematically performed on all types of USN planes.

From January 1923, Langley moved to the Caribbean Sea for carrier landings and came back to Washington, D.C., for a serie of exhibitions before civil and military dignitaries and returned at Norfolk in June, to train along the Atlantic coast and Caribbean. In 1924, she participated in extra maneuvers and exhibitions while she spent the in drydocks for modifications. On 29 November she join the Pacific Battle Fleet from San Diego, Cal. In 1927, she operated from the Guantanamo Bay Naval Base and alternating between there and Hawaii in fleet exercizes. Experimentation and pilot and crew training plus tactical-fleet operations were her daily lot until 1936.

Conversion as a seaplane tender

In October 1936, she was sent to Mare Island Navy Yard (California) for an overhaul and a conversion into a seaplane tender. It was decided by the admiralty that her training mission has ended successfully as she trained generations of pilots now promoted as officers in the air corps onboard the new Lexington-class aircraft carriers in 1927. By then, especially in the vast expenses of the pacific, the USN needed to support fleets of long-range floatplanes, and the ship was already well fitted to support aviation. However her deck was reduced to the rear part, kept to operate the floatplanes. The whome front section, about 1/3, was open.

Conversion was completed in February 1937, so only carried out in five month, and she emerged AV-3 on 11 April 1937. She served in the Aircraft Scouting Force, operating from Seattle, Washington, Sitka, Alaska, Pearl Harbor and San Diego. She was also deployed with the Atlantic Fleet in February to July 1939 and returned to the Pacific Fleet, Manila base on 24 September 1939, when the war broke out.

When the Japanese attacked Pearl Harbor, USS Langlay as anchored off Cavite in the Philippines and she departed the day after for Balikpapan, in the Dutch East Indies. She later sailed for Australia to flee the Japanese advance, and was in Darwin on the 1st of January 1942. She was enlisted in the provisional composite force called the American-British-Dutch-Australian Command (ABDACOM) and for ten days assisted the RAAF in ASW patrols off Darwin and along the coast. She then joined Fremantle to carry Allied aircraft to Southeast Asia, essentially 32 P-40 fighters for the 13th Pursuit Squadron. She was assisted by USS Sea Witch, with crated P-40s, and teamed up with the convoy MS.5 from Melbourne (USS Willard A. Holbrook, RAN Duntroon & Katoomba, USS Phoenix) departing on 22 February. Planes were delivered at Tjilatjap in Java.

On 27 February in the morning, she joined her escort, destroyers USS Whipple and Edsall, while a reconnaissance spotted them. Around 11:40, 75 mi south of Tjilatjap, the formation was attacked by sixteen Mitsubishi G4M "Betty" bombers led by Lieutenant Jiro Adachi from Denpasar (Bali) escorted by fifteen A6M Reisen. To be sure sinking their oving targets, the Japanese made many partial drops from medium altitude. Langley was aptly manoeuvered and evade two bombing passes, but the third was calculated to fall on her projected path. She took five hits, some being 250 kgs bombs (550 pounds) plus three near misses that still shook the hull. The immediate result was 16 crewmen killed. While she was set alight, steering down, she listed 10° to port and stopped dead in the water. At 13:32, she was abandoned by order while the destroyers started shelling and torpedoing her inert hull to be sure of impossible capture. The great majority of the crew survived on board USS Pecos, but they had to bail out at se again when the latter was sunk in turn, while sailing for Australia and this included almost all pilots assigned to the 13th Pursuit Squadron onboard USS Edsall, also sunk she when sailing toward the spot to rescue them. Later, an USS Independence class carrier was named in her honor (CVL-27).