During the first part of the XIXth century, no major fleet was able to commit efficient warship using steam power. Only a few “gunboats” used it as the sole propulsion mode (like Fulton’s Demologos back in 1813), as some dispatch vessels which used sail and steam combined, were all equipped with paddle wheels.

The paddle wheel was generally placed immediately alongside the main engine, at port and starboard. They offered a superb, unarmoured target, like an invitation to any enemy ship. For that reason, and the fact that these early steam engines were notoriously unreliable, unpowered and dangerous, coal-hungry that necessited a large storage aboard (therefore less space for artillery), and producing an easily traceable black smoke plume, visible from dozens of miles ahead. But this not prevent however some engineers to think about it, trying to solve the propulsion problem. The solution came in fact, in 1839, when the steamer SS.Archimeded made her maiden voyage from London to Sheerness. The particularity of this ship : It has a steam engine, but no paddle wheels were visible.

Its secret was a device invented by the famous Archimedes of Syracuse during the IIIth century BC. and “reinvented” or readapted by John Ericsson and Francis Pettit Smith. After screw modifications, including a new one, shorter and in metal, and several other cruises, the concept was definitely validated by the maritime world, with awe.

So much the impression it gave that the famous Great Western Steamship Company, then largely influenced by a no less famous chief engineer, Isambard kingdom Brunel, loaned the Archimedes and derived from it not only the biggest ship in the world, but also the first true modern liner: The SS Great Britain. This was in 1845. By then, the screw seemed to have won the battle of civil naval construction. But what about the navy ?

For the reasons seen above, the Royal Navy, like most of its rivals, was still reluctant towards Steam power, but the new device was intriguing if not promising for a new generation of naval engineers. One of them, the famous French naval designer Stanislas Charles Henri Dupuy de Lôme, was amazed by the screw applications and quickly devised plans for a ship of the line using it for propulsion, when he came back form Great Britain, when he mad a thorough study of steam power and iron shipbuilding in Great Britain.

He saw the construction of the SS. Great Britain at Bristol and carefully studied its plans. Now, after publishing a memory about his observation by 1844, he started a feverous work at the arsenal in Toulon. His design was a screw-driver frigate, protected by iron plating, which he submitted at the marine minister on 1845.

Joined with his colleagues of the “Génie Maritime” (naval engineering), he strongly advocated and lobbied the government. And by 1846, he had results : Alarmed by reports stating that the Royal Navy already has converted several “blockships” to steam power, the Minister ordered the same conversions.

At the same time Dupuy de Lôme has drawed new plans for a more ambitious two-deckers battleship using steam power and a screw propeller. The construction was accepted in 1848 and the construction, at Arsenal de Toulon, ended in 1850 when the ship -then baptised “Le Napoleon”, honoring the famous uncle of the actual Emperor, Napoleon III- was launched. 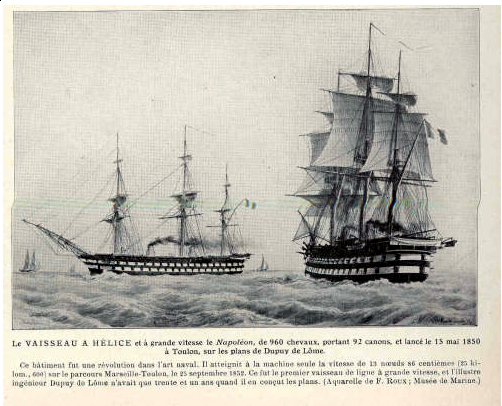 The Napoleon was indeed in 1850, both the first steam-powered battleship as well as the first screw battleship ever built… It immediately drawn attention of the international press and admiralties, including a perplexed Royal Navy. Soon, the ship reached speeds impossible with classic sailship of the line, like 14 knots during trials in 1852, and maintained a cruise speed no less impressive. This was a full-fledged 90-gun warship, with two complete and one incomplete upper decks, three masts, 240ft of lenght, 55ft of width, 27ft of draught, for a 5000 ton displacement. The steam engine was seen as an auxiliary one, a 2-cyl Indret geared, of 960 nhp (574 ihp), which gave excellent performances, thanks to the fine hydrodynamic qualities of the hull. Artillery comprised sixty 30-pdr (220 mm), the standard caliber of the time. The crew rose to 910 men.

Although original plans included iron plating, the urge was such that a more classical configuration was chosen, with a wooden hull protected by a 8 inches thick layers of teck and oak timbers. Also the sailing qualities defined by naval engineer Jean-Michel Sané were kept unchanged, combining the best of both worlds. The result was a landmark in naval history. The Napoleon was in fact, the first of a serie of height other sister-ships, comprising also Arcole, Algésiras, Redoutable, Impérial, Ville de Nantes, Ville de Bordeaux, Ville de Lyon, and Intrépide. 28 ships of the line were also converted on the stocks, while the British built 18 new comparable ships and converted 41 others.

Author’s rendition of the Napoleon

The naval arms race between France and Great Britain reached its peak ten years later, when the second concept of the brillant Dupuy de Lôme was unleashed, as the Gloire, first sea-going ironclad ever, pushing the boundaries of naval warfare to new levels, definitely nailing the coffin of the century-old era of tall sailing ships of the line, and open that of the modern battleships which will rules the seas until 1945…