♆ Naval Encyclopedia is an online warship museum, dedicated to the history of all ships of the industrial era, roughly since 1820 to this day. It is focusing on the 20th century through until the end of the cold war. It covers also the classical antiquity, medieval, renaissance and enlightenment eras as well as naval engineering and technology. It covers also history through battles and campaigns, with tactic and strategic overview.

Photos, blueprints and dedicated illustrations, also some merchandising to support this site !
All Posters

Naval Encyclopedia is the first online warship museum (1997), with 2,600+ pages for now, and counting. Dedicated to the history of all ships of the industrial era and 20th century, so 1820 to 1990, but also earlier times. The main difference for this early period is to study ships types through some famous examples. The latter is a work in progress since more than twenty years. This current version is #5. After its last refit in the summer 2022, the present website is:

Powered Navigation
Wind and human power first, and from the 19th century, steam power (fossil fuels based, also a crucial fact in naval calculations, explaining a part of geopolitics in the XXth cent.), up to the dominance of nuclear energy for the most valuable assets.

Relations between the Civilian & Military at Sea:
There has been path of divergence and convergence also between civilian ships and their navy counterparts, like the  amous Galleons of the 16-17th century that blended the role of cargo and warship. This survived well into the 20th century on civilian ships, first as a precaution (like fake ports) then as a tradition on mixed and tall ships. In fact relations always had been blurry.

Nowadays the most complex hand-built moving crafts ever designed by mankind, arguably, are nuclear submarines. Specialization and optimization helped global trade in the last XXth century, and especially the XXIth one frequently called “globalized”, based on the consumer society.

The challenges world’s fleets are facing are huge, traducing like always the shifting weight of nations in geopolitics, in ever growing tensions born from dwindling resources. So, Naval Encyclopedia is about ships, mostly military, because what does kaboom seems to draw more interest… Than the “invisible” container ship and their anonymous boxes going A to B.

And the “kaboom” subject is quite large to cover already as it goes so far back in time. There are also many suggestions that the lines between civilian and military ships were blurred most of the time as said above. It was still true in 1982 when the Royal Navy going to the Falklands requisitioned passengers ships and ferries to supplement their troopship delivery.

In fact, modern experts do the maths for a possible invasion of Taiwan and count also all passengers ships and ferries that could be requsitioned by the PLAN. And in WW2, countless civilian vessels were armed and thrown into action, from huge liners converted to fast troophips, to armed merchant cruisers, merchant raiders, and converted vessels, notably to aircraft carriers but so many other types. And this goes straight down to the small armed trawlers.

What to find here and long term objectives

the main goal is cover at least each class of ship that was ever recorded, and each and every type, category model or variant. By “type” it could be a simple administrative denomination, but here we mostly designates a “generic” type, for example a battleship, aircraft carrier, cruiser (many sub-types), destroyer and submarine for the recent past, and corvettes, frigates, gunboats, torpedo boat, and many others, including old sailing terms.

The panel of eras covers nowadays, with the limit of the end of the cold war, but many ships planned and designed in 1990-91 are treated too, down to the bronze age, with little we have to figure out these early types. For the XXth, the goal is to not only have all classes covered, but the ship’s histories and careers too. For large vessels, cruisers, capital ships and aircraft carriers this is possible on the medium term, but to detail the individual classes of destroyers, submarines, minesweepers and the like, it is planned from 2023 onwards.

It is even dubious that very small patrol vessels would be also covered individually, because in part of lackof interest, logs and details, and time to collect these informations. Treatment in that case would be merely statistic. How many were sunk, completed at that date, equipped that way, modified this way, etc.

So in short, we will discuss classes mostly from the XIXth century onwards, and “types” before that, and “classes” for convenience when the individual ships for example had a similar displacement and were ordered based on the same number of guns or caracteristics. The more we go into the past, the more we only find “types”.

Other Sites of the Portal

TANK Encyclopedia is since 2011 the reference for tanks nerds with more than 1500 pages, 8,000,000 visitors and counting. It’s not only about famous tanks but down also to the most obscure armoured car or prototype.
Truck Encyclopedia is Tank Encyclopedia’s independent section on military trucks and staff cars from WWI to this day, from all countries and specialities, like AA vehicles and Transporter Erector Launchers.
Plane Encyclopedia is the main aviation center of the portal, with many prototypes and land-based models as well as helicopters. (In complement to the naval aviation section of this site !)

About classes and standardization 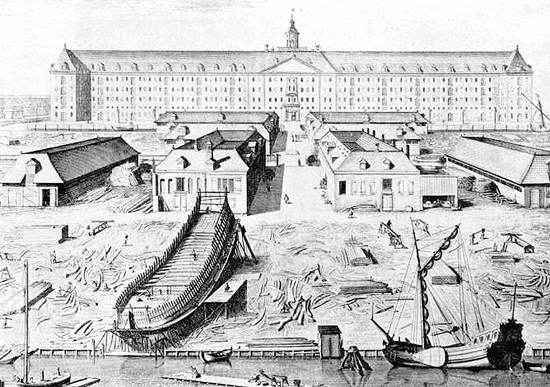 The 18th century’s “74 cannon” for example was a well-known sailing ship of the line type, but apart the number of guns it is difficult to establish a “class” per se, as each yard had its own more or less empriric calculations, resulting in many diverging types even in the yard itself, from a Royal order asking for twenty “74 cannons”. But standardization always existed to some degree. A good example would be the first punic war.

The Romans, which were complete strangers to naval matters, turned to Magna Grecia to have a large fleet very rapidly built, so quick historians had doubts about it for a long time, that is before a discovery: Indeed a rare punic wreck showed that all parts were marked with precise cotations. This was interpreted by mass production already thought of, as every ship was a essentially a jigsaw puzzle, with masses of similar parts coming in for final assembly. And as few ships really sunk at the time, most were captured or just ended washed on shore. They would be cannibalized to replace damage parts or reconstruct a new ship from several wrecks.

In the medieval era, there were specialized types, but again, the ships could diverge due to many factors, notably the will of the local governor to commit his finances in some cases. Ships could aldo be private funded. If in the ancient Athens, Salamine’s Greek fleet was financed in great part by the Laurion mines, decided by the ruling class, but still the ships were maintained by private owners and captains loaned. Thus, without attested centralized state supervision (again the Carthaginians probably had an edge on this), they could diverge considerably from a yard to the next.

Local Scandinavian warlords ordered ships in single units and for specific purpose rather than entire fleets, which for expeditions were conglomerates of various chieftain’s own private fleets. Powerful trade companies like the Baltic leagues, Italian city-states also built ships in units rather than classes. Standardization in the end mostly came from the constitution of powerful nation states in Europe. Only kings and Emperors of these early Empires could order to many yards a specific type of vessel for the fleet. The creation of a navy ministry also helped on this, for planning long-term (notably forest management).

However even in that case, the types did not equate classes. For example during the Russo-Swedish wars of the early 18th century, the Swedes committed a variety of “archipelago frigates” scientifically designed by a renoewn architect and well adapted to the Baltic, which bore specic names and were well identified, such as a Hemmema and others. But this does not equate a class, as each yard responsible for their construction made them on their own plans again, and they diverged in countless details. Centralization in ordnance still appeared in the same century and the enlightenment age pressed forward for a globally more scientifical approach to naval construction and to get rid of empirism alone. The sharing of knowledge, notably through the creation of the encyclopediae, with the involvment of mathematicians and specialists born from a solid university network drove this standardization, which peaked in the XIX Century.

Indeed, nothing but industrial standardization of the XIXth century made a “class” no longer poetry but a reality. Casting, bolts and rivets, as well as new manufacturing processes and techniques guaranteed consistent sub-parts. Entire, complex and large ships could be entirely duplicated. At last several classes in a single type could be identified and registered. In the civilian and military sectors alike. RMS Titanic for example belongs to the same class of three ships ordered by the White Star Lines: The Olympic class.