Merivoimat, the sand grain in the Russian boot

The deeds of the Finnish Infantry in 1939 against the Soviet juggernaut during the fabled “Winter war” are well known. Lesser known is that at sea, the situation was as desperate with the Finns suffering a numeric inferiority of almost twenty to one. Despite their small size, the Finnish Navy (including its coastal forts) managed to inflict losses and disrupted Soviet merchant shipping during both the Winter and Continuation wars. At first glance, the Finnish Navy relied heavily on mines to protect its assets. There were no destroyers in the fleet and the only three torpedo boats in service dated back to 1899. However, a squadron of five German-built Submarines and MTBs completed a solid defensive fleet composition centered around a pair of massive coast defense ships, which were nearly battleships in the context of the Baltic Sea: The Ilmarinen class. Finland was since the Napoleonic wars a Russian Grand Duchy, and obtained her independence in 1917, seizing the opportunity during the Russian revolution. She was fully independent with a constitution and established institutions in 1918, first as a Kingdom, before later becoming a Republic. At that time, the Navy (Merivoimat) was constituted from the remnants of the local Russian squadrons abandoned in Finnish ports, a collection of prewar ships mostly in a bad state. In the 1920s, as the USSR reinforced its army and ambitions, nearby Finland saw herself as a potential target with only a modest army and nearly no naval or air power. Out of an already modest military budget, there was little left for naval ambitions, with the Finnish frontier being the focus of all the military’s attention. However, in 1928 parliament eventually voted for a naval rearmament plan that was to be defensive and centered around two massive defense ships, submarines, MTBs, and mine warfare ships. However, the navy would have to make do with this into the 1940s, as, with increased Russian troops on the borders, the Finnish army once again took precedence.

The Finnish Navy found herself threatened in 1939 by the invasion of the Baltic states of Estonia and Latvia, which were forced to give their ports to the Soviet navy. Finland was “invited” to join the USSR, but rejected Soviet demands, and was shortly after invaded on November 30th, 1939.

From then on, the Navy contributed to fending off any Soviet attempt to make an amphibious assault, constraining the operations to the front held by the Finnish Army. Coastal Finnish submarine Saukko at launch. She was too slow to operate effectively.

At that time, the Finnish Navy comprised:
2 coastal battleships (Vainamoinen class, 1930)
5 submarines: -Coastal submarines Saukko (1930), and Vesikko (1932), and those of the larger Vetehinen class (1930).
4 sloops: used as gunboats, two of the Hämeenmaa class and two of the Karjala class, 400 and 342 tons respectively.

The naval aspect of the Winter War saw heavy restrictions due to sea ice. This however eased in the spring and the Finnish Naval staff was tasked with identifying possible Soviet routes of naval invasion and attacking valuable targets, restricting the defensive perimeter that the Finnish navy had to defend, and allowing its minelayers to be more effective. The Winter war saw duels between Soviet ships and Finnish coastal batteries at Hanko, Finland, Utö and Koivisto. At Koivisto and Hanko Soviet battleships were forced to retire, damaged. However submarines Vesikko and Saukko failed to sink a single Soviet capital ships. From December 1939, ice prevented any move of the fleet but preceded by ice-breakers. The two coastal defence ships sailed in Turku and were used for AA defence, painted in white, remaining there until the end of the war.

The Winter war saw duels between Soviet ships and Finnish coastal batteries at Hanko, Finland, Utö, and Koivisto. At Koivisto and Hanko Soviet battleships were forced to retire, damaged. However submarines Vesikko and Saukko failed to sink a single Soviet capital ship. From December 1939, ice prevented any movement of the fleet but ended up being circumvented by icebreakers. The two coastal defence ships sailed in Turku and were used for AA defence, were painted white, and remained there until the end of the war.

Praised at Spithead in 1937 for their beautiful lines, the two coastal battleships were initially deployed to the Åland Islands to prevent landings by Russian troops. Transferred to Turku (in Southern Finland) later they served as floating anti-aircraft batteries. The Continuation War saw them resume service, shelling the Hanko Peninsula base five times from July to November 1941. Ilmarinen later participated in Operation Nordwind (13 Sep 1941). On her way back she struck two naval mines, sinking within seven minutes and carrying with her 271 men, although 132 survived.

Submarines of the Vetehinen-class like the Vesihiisi laid mines on several occasions, sinking many ships in the process, and being one of the most successful allied submarines in that area.

Five MAS MTBs had been ordered from Italy for future operations against Russia. However, at the start of the conflict, the Hanko Peninsula’s Soviet base had command over the Gulf of Finland and effectively split the Finnish Navy in two. Coastal artillery positions at Russarö and Osmussaar guarded minefields barring the entrance to the Eastern Gulf of Finland. Later on, the Kreigsmarine assisted the Finnish Navy in laying large minefields and the Finnish coastal defence ships were soon back in action shelling Hanko until it was evacuated in December 1941.

Until 1945 all three belligerents laid some 69,779 mines and obstacles in the Gulf of Finland (16,179 by the soviets, 6,382 by the Finns, 45,000 by the Germans, including 3,000 magnetic mines). After the war, the area took until 1967 to be cleaned up effectively but estimations are still that hundreds of mines lay uncharted in the Baltic Sea. Soviet mines, in particular, claimed on September 13th, 1941, the coastal battleship Ilmarinen, the largest Finnish naval loss to mines in the war.

In 1942 anti-submarine warfare took preeminence over other operations for the Finns, with the axis fleets trying to deny Soviet submarines access to the Baltic Sea, which the mine barrier proved insufficient to prevent. Soviet subs managed to sink 18 ships, half of which being Finnish, although the latter claimed 3 of the 12 Soviet submarines operating in the area sunk. Anti-submarine nets were later placed between Naissaar and Porkkala, and the preventative measure was completed by the laying of new minefields that forced the Soviet ships to the eastern part of the Gulf of Finland until late 1944.

From the spring of 1942 Finnish control of the island of Gogland proved valuable while the Soviets failed at seizing the small island of Sommers, and the Finnish Navy received an addition of 14 new modern MTBs in early 1943. In 1944 a major soviet offensive saw Finnish troops at first holding their lines with a major factor in their defense being the close support of the Finnish Navy in the Gulf of Vyborg though they were later forced to retreat.

In September 1944 Finland switched sides, and attention shifted to the North, with German efforts to capture Suursaari (operation named Tanne Ost), failing in part because of the decisive action of Finnish MTBs. During the Finnish amphibious landing in Oulu, gunboats silenced German batteries, with their AA batteries fending off rare German air attacks while U-boats were chased out of the Baltic. 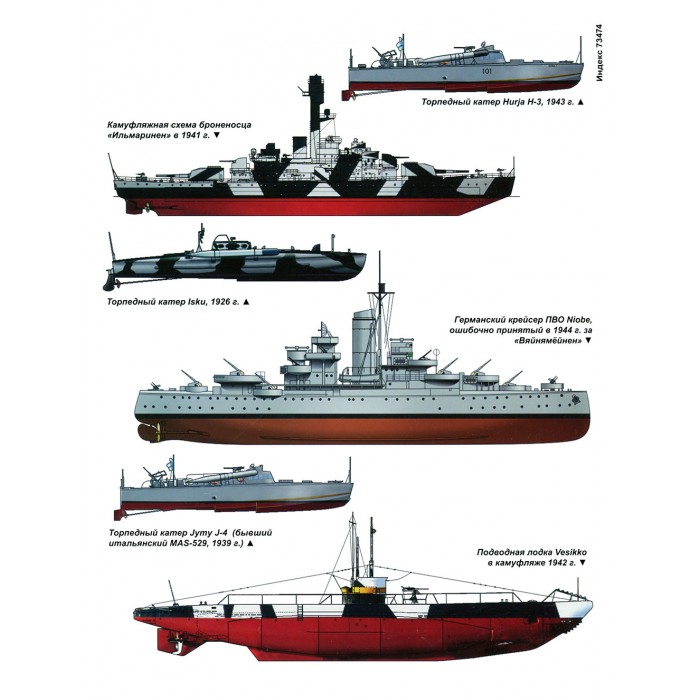 Russian rendition of ships of the Finnish Navy (including a German FLAK conversion cruiser).

Like other Scandinavian fleets, Finland approached coastal defence with pragmatism, and ordered two coast defence ‘battleships’. The term is improper as the ships were tailored as a deterrence, not to wage war on open seas with other battleships. All that was needed was four battleship-size main guns, and sufficient armor to dealt heavy blows on any warship passing by. The combination was more efficient against cruisers of course, as the pair did not stand any chance against a Bismarck class ship.

Vainamoinen, with her sister ship flagship Ilmarinen were actually built in Finland, at Crichton-Vulcan shipyard (Turku), launched in 1932.
https://en.wikipedia.org/wiki/Finnish_coastal_defence_ship_V%C3%A4in%C3%A4m%C3%B6inen

12 tons launches. Three were lost during the winter war.

4 class Nuoli (1928, Thornycroft, first pair, and design for the others)