⚠ Note: This post is in writing.
The Alaska class were the great white elephants of the US Navy. Their conception goes back to the beginning of the war, when all the treaties of limitation became obsolete. The US Navy therefore only released itself to study a new standard of conventional heavy cruiser (the term "conventional" designated during the cold war a ship not armed with missiles, but having artillery like main weapon.). The heavy cruiser genre was then brought to a logical degree of "upsizing" taking into account the reality that applied to all warships, ever larger and more powerful. A cruiser from 1880 rarely exceeded 100 meters and was limited to 5,000 tons.

The Baltimore rose to 17,000 tons at full load, and with Prinz Eugen German, to 20,000 tons. However their main armament still remained 8 or 9 pieces of 203 mm. With the Alaska, the Admiralty intended to pass directly to the caliber 305 mm, that in force on the ships of line since 1890 and until 1916. Their distribution and the general physiognomy brought them much closer to the contemporary American battleships, so that they were sometimes placed in the obsolete category of "battle cruisers", which took into account their speed -33 knots-and their armor-relatively light.

The influence of President Roosevelt on their design is often cited. Enthusiastic like the other Theodore of the beginning of the century by all that touched the navy, he wanted for the fleet a type of ship similar to that which made the pride of the Royal Navy, like Hood. It was also intended to make, like the German Germans, an invulnerable pirate of this "super cruiser".

The Alaska class was to have 6 buildings, but soon, when it became apparent that the concepts underlying them were totally out of date, the other three, which should have been started in June 1943, were canceled. Two units were completed, Guam and Alaska launched in 1943, and Hawaii in March 1945, but only the first two were completed in June and September 1944. They proved in operation that they were a pretty bastard concept, finally, and having no adversaries after their war, expensive maintenance and in any case outclassed by missiles, these dinosaurs had no place in the fleet. They were put in reserve since 1961.

The Alaska class in service 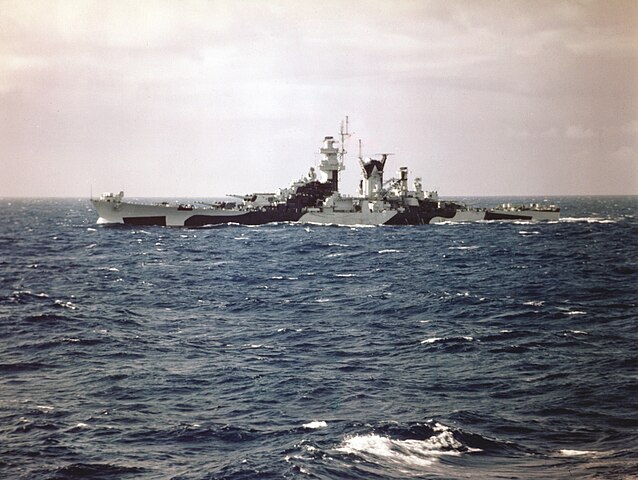 As the lead ship of her namesake class, this "large cruiser" was the third vessel to be named after the territory of Alaska. Launched in August 1943 at the New York Shipbuilding Corp. Camden, New Jersey, she was commissioned in June 1944, but not the in Pacific before the latter phase of the Philiipines campaign. She participated in operations off Iwo Jima and Okinawa, mostly providing a strong anti-aircraft defense for the fast carrier task forces and limited shore bombardment operations. She was one of the rare ships to shot down Ohka piloted missile. In July–August 1945 she also hunted down for Japanese shipping in the East China and Yellow Seas and after the war, assisted in the occupation of Korea while also taking part in "pagic carpet" operation. She was decommissioned in February 1947, stricken in 1960 after a long mothball period.

She was the second and last ship completed of this class and second of the US Navy to be named after the island of Guam. As her sister, and even less so, she saw relatively limited service, participating in the Okinawan Campaign from March to July 1945, mostly providing AA defense for the carrier task forces and pn-demand shore bombardment. She also took part in the sweeps against Japanese shipping in the East China and Yellow Seasduring the supper, as well as off the homs island shores. Like her sister she assisted in the occupation of Korea and participating in Magic Carpet, caryying troops back to the United States. Decommissioned in February 1947 she was mothballed too until stricken in 1960.

She was intended to be the third of the Alaska-class, and first USN ships to be named after the Territory of Hawaii. Construction was delayed so her keel was not laid until December 1943 and she was therefore launched in late 1945, then cancelled in 1947 amidst post-war budget cutbacks. These ships were seen as not a good bargain for the time as they required a crew almost as large as a South Dakota or Iowa-class battleships, without the same advantages but a marginally better speed. Their general protection was not better than the Baltimore-class cruisers and underwater protection even worse. A Proceedings article in January 1949 by Frank Uhlig dismissed their performances at the end of the war, concluding they had no place in the postwar USN. Although the USN thought of guided missile cruiser or aircraft carrier conversions, or a large command ship in 1952 nothing came of it and USS Guam, laid up for twelve years, was towed to breakers and scrapped in 1959.