In 1914, the Royal Navy aligned dozens of cruisers of the old 3rd, 2nd and 1st rate, protected and armoured, but after the launch of the Dreadnought in 1906, production focused on light cruisers, and this lineage would go through ww1 and beyond. Operations showed however the need for a more heavily armed cruiser type designed to counter German commerce raiders and be posted in far away overseas stations to deal with 170 mm-armed German cruisers (like Von Spee’s Scharnhorst class). Too late for ww1 (the five cruisers were completed 1917-18 for the first two, but operational in 1919), they inspired the model of heavy cruiser defined by the Washington treaty in 1922, had a quite active career in ww2, famously named after Elizabethan corsairs. They also inspired a new type of Interwar “colonial cruiser” known collectively as the “County” class. 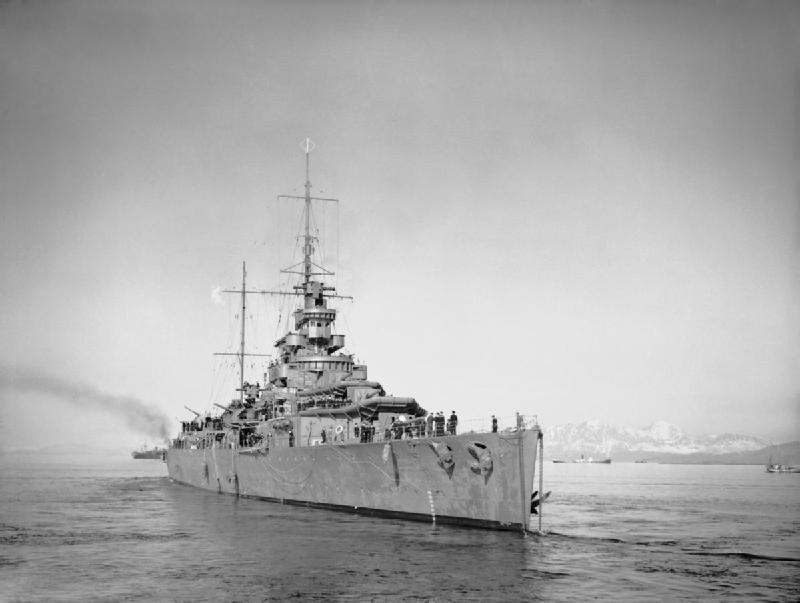 The main attention and focus turned to artillery as everything revolved around it, with an original combination of 190 and 102 mm pieces as designed. Efforts were made to boost their autonomy, for a final displacement of 9000 tons. In their final drawing in 1915, they were also able to face any cruiser of the time thanks to no less than seven 7.5-inch (191 mm) Mark VI guns under masks, distributed along the axis, with two side ones Almost in the center, for a six guns broadside. This was still a far cry to the next evolution (eight 8 in guns) but the path was there. They rendered obsolete armoured and protected cruisers overnight by using fuel instead of coal and were much faster. A new generation of cruisers, that would serve actively in the interwar, but still appeared as “ancestors” in 1939. There were significant differences between the ships at the end prior to ww2. However their uniform design included a radical armament of only heavy pieces and light dual-purpose ones for some (with TB in mind as well as aircraft). In detail, these were all to be equipped with seven 7.5-inch (191 mm) Mark VI guns in single mounts CP Mk.V, eight × QF 12-pounder (76 mm) 12 cwt Mk.II guns in single mounts P Mk.I, four QF 3-inch (76.2 mm) 20 cwt Mk.I guns on single mounts HA Mk.II and two submerged and four fixed surface 21-inch (533 mm) torpedo tubes.

HMS Vindictive as completed as an hybrid aircraft carrier with a capacity for six reconnaissance aircraft. She was briefly armed with four 7.5 in guns and six 12-pounder guns but in 1923 was converted back as a cruiser, only retaining a forward hangar and instead of ‘B’ gun a crane and catapult were fitted. Fleet repair ship in 1940 she was damaged by an airborne “Dackel” torpedo off Normandy. Repaired she served as a destroyer depot ship (reserve 1945, BU 1946).

HMS Raleigh was lost on an unclassified reef of the Labrador coast in 1922, and the Vindictive was transformed into an hybrid aircraft carrier and converted as a fast supply ship in 1935. The other five ships were modernized in 1936-38, but it was planned to disarm them, but that was suspended when international tension grew. Their underwater torpedo tubes were removed, their old 76 mm AA pieces were replaced by four 102 mm quick-firing guns and ten 40 mm Bofors in quadruple and single mounts plus nine single 20-mm Oerlikon pieces.

They received even more AA guns during the war, plus were equipped with a type 273 centimeter radar, a 286 type aerial surveillance radar antenna, and a 275 electronic fire control systems. The Frobisher additionally received two types 282 For its Bofors mounts. The latter was also freed from her side 190 mm guns in favor of additional 102 mm guns in twin turrets. Their combined heaters went to oil only and their boilers were replaced by more modern models. Most of these ships has been used for escorting convoys. Effingham, for her part, was rebuilt in 1937: Her engine was modernized, chimneys truncated into a single one, artillery replaced by only 152 mm quick firing pieces under masks, three of which were superimposed on stepped gangways. In this configuration she was a bit in a way the prototype of the future “Dido” AA cruisers. HMS Hawkins in the interwar

The Effingham was lost early in the war, in 1940, on a reef in Norway. But before that she had transported two million pounds of gold from the Bank of England to Nova Scotia, chased German raiders into the Atlantic, and then participated in the Norwegian campaign. Torpedoed by the U38, she survived, was repaired in record time and returned to operations, fighting in particular in Narvik. It was there that she met her destiny. For the anecdote, the map operator drawn a course so thick that it masked a reef off Navik’s passes. She struck this reef in right when racing in the middle of the night, opening an immense breach in her flanks which caused a rapid sinking. Fortunately, most of her crew escaped and swam back to shore. She was then achieved by friendly gunfire to prevent capture and reduced to the state of smoking wreck four days later.

HMS Effingham as rebuilt in 1938

During her peacetime career, Frobisher served in India, the Atlantic and China. She had been disarmed in 1930, and served as a schoolship but was eventually modernized and rearmed between 1940 and 1942. She was sent rapidly to the Far East where the situation deteriorated and fought against the Japanese until his return in late 1943. She served as an escort in the Atlantic and provided fire support in Normandy in June 1944, covering Sword beach. She was torpedoed by night by an unidentified S-Boote in August 1944, repaired and finally partially disarmed to serve as a school ship again, a role she held until set aside, unlisted, sold and broken up in 1949.

HMS Frobisher in the Firth of Forth, 1945

The Hawkins served in The southern Atlantic, based in the Falklands, to intercept potential German corsairs trying to pass Cape Horn. She was then sent to the Indian Ocean, where she carried out a raid on Mogadishu against Italian shipping, capturing a cargo ship. After an overhaul lasting until 1942, she was sent to the Far East to assist the Frobisher against the Japanese. Then she returned in time to participate in D-Day operations at Utah Beach. Afterwards she was broken up after the war in 1949.