Little Belgian Navy could only oppose to the might of the Kriegsmarine a modest fishery protection vessel in 1940, the Artevelde. See the detail for the ww2 fleet. After 1947 and the start of the Cold War, the Belgian navy was naturally integrated into NATO. But her fleet was in poor conditions with its old Artevelde, formerly in German hands and worn out, or the 30 years old Jan Breydel, used by the Germans as the floating battery “Barbara”, inoperative for sea operations. The USA delivered Belgium under the general procurement plan, a Tacoma class frigate, which entered service as Luitenenant ter Zee Victor Billet. Subsequently, the Royal Navy delivered 6 surplus Algerine class minesweepers which finally helped the Belgian navy in their reconstitution process, with the main objective of securing the approaches to the Flemish coasts, still infested by German mines. The Belgian navy’s limited postwar budget certainly not allowed a larger sea going fleet. It was rather closely, almost organically integrated into NATO’s maritime defense system, with responsibility for the safety of trade lines between the North Sea, the Channel, and what was still called the “Western approaches”.

Through MDAP, the military side of the Marshall Plan, Belgium received no less 47 minesweepers in the 1950s-1960s, and some modernization to their single escort ship Victor Billet. From then on, the Belgian Navy definitely was assimilated to a specialized anti-mine force. The additional Algerine class vessels (8 in total from 1949 to 1959) were then used as patrol ships and ASW escorts to help the Victor Billet. Between 1956 and 1966, 7 oceanic minesweepers of the Agile class were procured, locally called Artevelde class plus 26 wooden coastal minesweepers of the Adjutant class (locally called Lier class) in 1953-55, of which eight were built locally, and finally twenty Improved “Ham” (local Herstal class) light wooden-built 1956-58 minesweepers.
In addition, the imposing minesweepers fleet demanded support vessels, for which two were specially built, Godetia in 1965 and Zinnia in 1967.

Poster of the Belgian Navy in 1990, showing the ship’s types

The lack of proper defense for these minesweeper fleet, until then provided by the French Marine Nationale and Royal Navy led to study a frigate design in Belgium, able to better protect these minesweepers. This is how the four Wielingen class, most ambitious ships ever commissioned by the Belgian Navy, were studied and launched. Belgian yards did not possessed the capacity, skilled labour or technical means to build them, so they were delegated to Cockerill (Hoboken) and Boëlwelf yards (Temse) in the Netyherlands, but on Belgian plans and under their supervision. They were launched in 1975-76 and until 1990 gave precisely this advanced escort and projection capability the Belgians requested, and most recognisable vessels of the Belgian fleet to this day. The replacement of the considerable minesweepers fleet started in 1983 with a joint Franco-italo-Belgian project: The “Tripartite” mine hunter program, also fitting the new NATO standards requirements. Ten were built at Béliard shipyards in Ostend in 1984-1990, designated as the Aster class.

After 1990, the Belgian navy like many others, was in the process of drastic reductions. Only two frigates were maintained in service, another was sold to Bulgaria and eventually one scrapped and two inactivated in 2004. They had been replaced by second-hand Karel Doorman class vessels since. The minesweeper force was reduced to 20 small Herstal class inshore minesweeping crafts and 10 “Tripartites” vessels. The Belgian Frigate Leopold I (F930). The second one is Louise-Marie (F931), also transferred in 2005 and currently in active service. They were the first two of the Doorman class, dating back 1991.

Balance sheet for 1990:
-4 Frigates:
Wielingen class. Fairly versatile and long-range missile launchers.
63 Minesweepers.
A considerable force, undoubtedly the largest of its type then aligned in Europe at this date. It included the ultramodern Aster class mine hunters, the old Agile class oceanic vessels of American origin, the Adjutant class coastal personnel, and the small river and coastal Herstals.
2 Support ships:
Godetia and Zinnia have been contributing their capabilities to keeping these fleets operational since the 1960s.

Studies on these ships (E71) began in 1969. The limited capacities of the Belgian shipyards meant that they were for a moment expected to be built in Holland, but they were finally built locally, in Boëwerf and Cockerill, shipyards of Temse and Hoboken. They proceeded from a rather Batavian design, but with French equipment, and props studied for the harsh conditions of the North Sea. Their equipment was fully compatible with the latest NATO standards, in accordance with the full integration of the modest Belgian navy into the NATO defense system.

The Wielingen, Westdiep, Wandelaar and Westhinder were completed in pairs in January and November 1978. They had a central operation located between two decks, equipped with NBC. They were only gradually modernized. Currently, only the first two are active, the Westhinder having been withdrawn following a fortune at sea and never repaired. The Wandelaar has been placed in reserve. 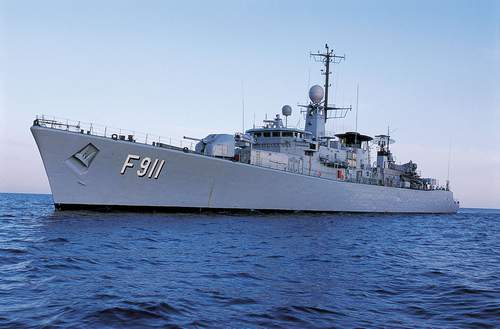