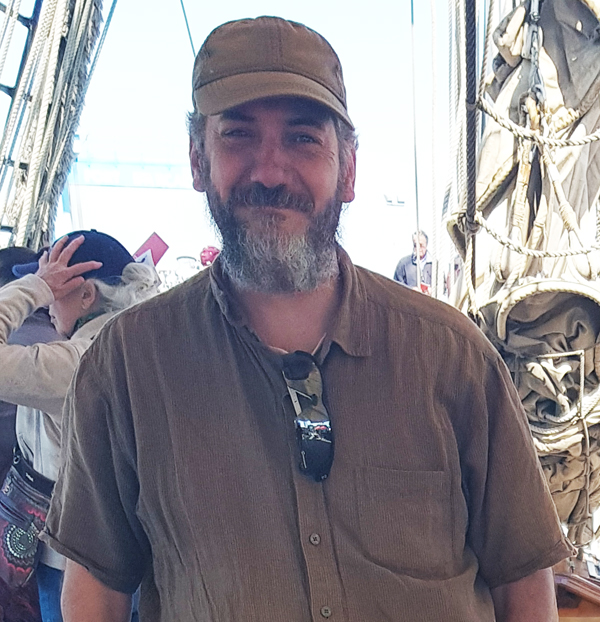 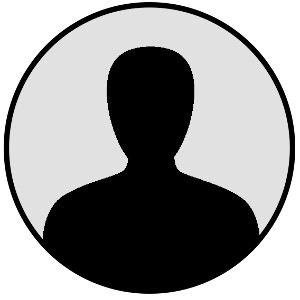 Personal interest about the sea for me is an old one. Born from a family of Dunkirk, at the tip of NW France, i enjoy being at sea, fishing, swimming and making boat trips at the occasion, helping out rigging whenever possible. My great-grandfather was a fisherman (“Terre-neuva”) going on the “Grand Bancs”, and newfoundland old salt. At the end of his career he commanded his own three-masts. My grandfather in turn served on many ships and ended creating an important shipping and import-export company in Dunkirk. Currently i’m still living close to the sea, ports, yards and ships, in arcachon bay, near Bordeaux, France.

As a webmaster by trade, i looked for linking my job and personal centers of interest as the best way to treat content. And so this website was born, after navistory.com, in fact was my very first ship-related site, 20+ years ago. Its content has been translated and is now “feeding” the pre-industrial section of naval encyclopedia.

Naval Encyclopedia’s content was originally written in French. The archive could be seen there. Once this material was translated, next followed the completion, a long-run enterprise. I will not venture into the modern era yet, as for example, Dimitris Mitch’s excellent navalanalyses.com/ already does this wonderfully.

The new version of Naval Encyclopedia has been launched in may 2016. The Vocation of the website is the same as Tanks Encyclopedia, providing an exhaustive, relevant and reliable battleships database from the antiquity to the XXth century (the 1st world war, ww2, and the cold war) treating also little-known and little-seen navies and small warships, along with naval battles, biographic posts, tech, or tactical evolution. Aside internet the main source is the excellent and trusted Conway’s all the world Fighting Ships serie of four books covering 1860 to 1995. The bible i refer to but i often cross these informations with many others, since these publications are fairly old already. 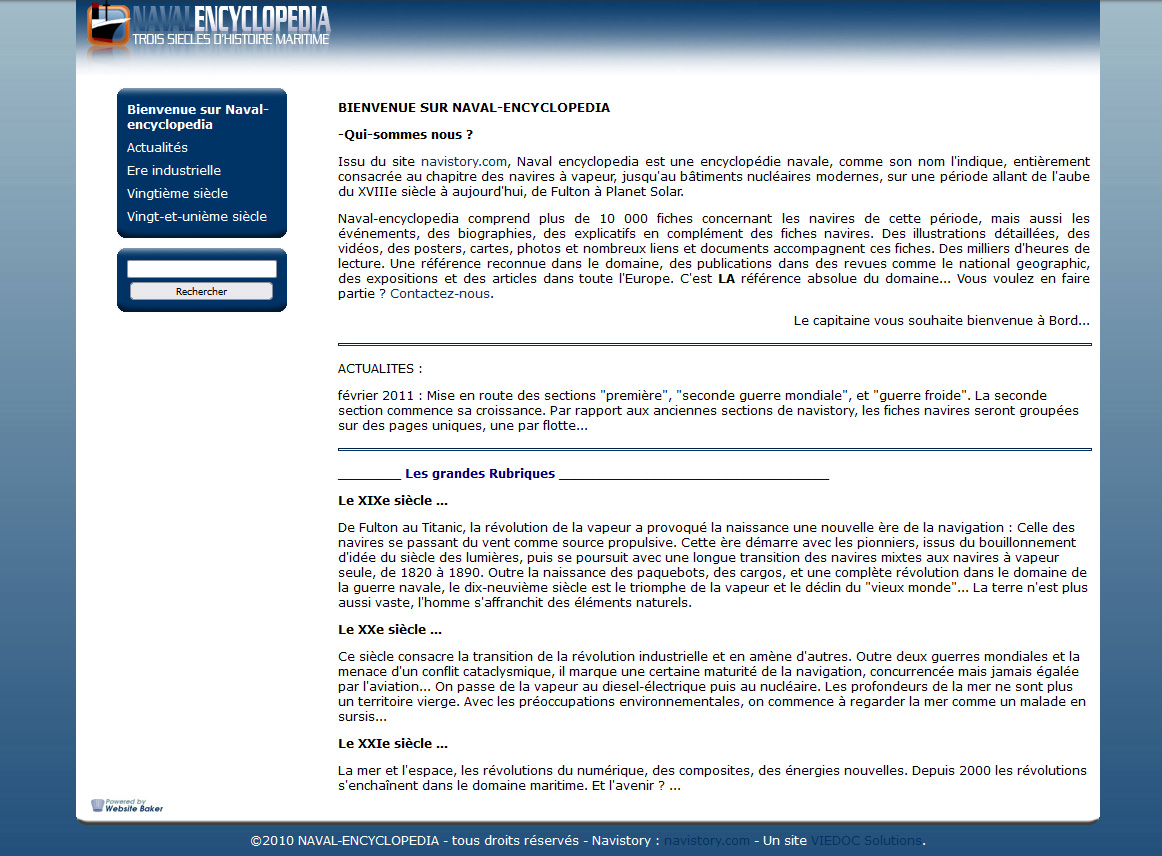 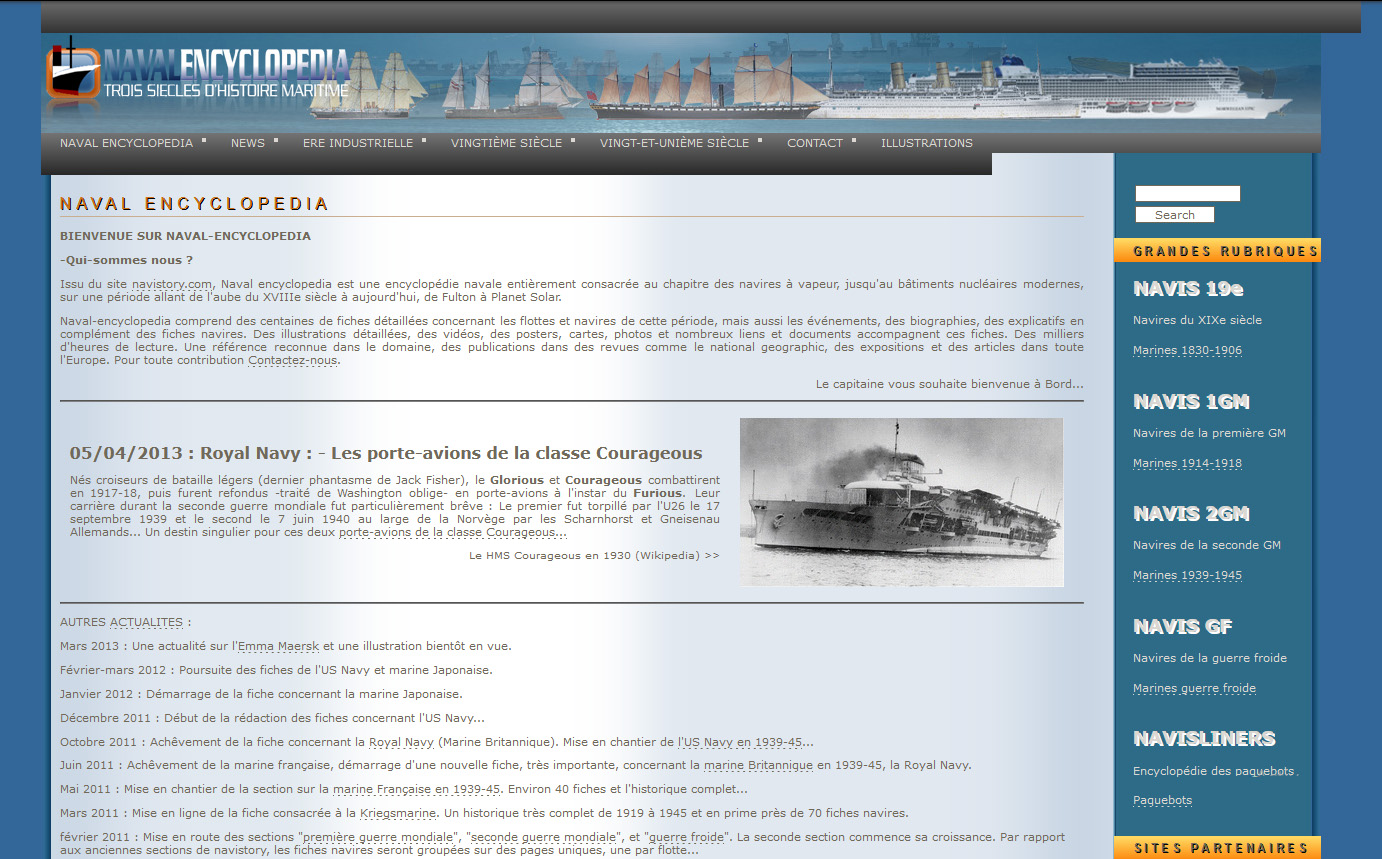 I’m also an illustrator, starting 20 years ago by painted renditions of various ancient ships, which pics are largely found on the internet, making their way in books and documentaries, video games, tabletop games and many others since, far and wide and in many languages.

I worked with gouache, acrylics, digital (pixel and vectorial) explaining diversity compared to my works for tanks encyclopedia.
-If you are an editor, perhaps interested by this content, please check the mailboxes below.

-For your private collection, check the HD versions in the poster section just by clicking on it. Many fleet posters only exists in 72 dpi or web size so they will never be suited for printing. However posters of the main fleet can all be printed in HD on demand, besides redbubble.

My passion for warships dated back from college when i used to purchase books and turn out scratch-built rare (not found in retail), highly detailed 1/700th scale waterline models on dioramas. Unfortunately this fragile collection never survived life and relocations. 2d illustrations however survived, and made their way from the scanner into this website. By the way, the original content contact is there, and helped this ww2 website to grow as well.

Naval Encyclopedia is the first online warship museum (1997). Dedicated to the history of all ships of the industrial era, roughly since 1820 to this day. Although the main scope is about the XXth century through four main eras (WW1 and second world war, cold war and modern-day fleets), the website also covers (and will cover) civilian liners, first steamers, ships from the age of sail from the ancient ships of classical antiquity to medieval ships and renaissance vessels up to the enlightenment era ships which ambition also to cover most main types of ships of the time and famous examples.

Naval History is indeed quite old and warships has been a constant evolution, just as tactics which adapted to existing sources of power. The wind and human power (rows) and from the XIXth century, steam power and the rule of fossil fuels, up to the dominance of nuclear energy for the most valuable assets. There has been path of divergence and convergence also between civilian ships and their navy counterparts, like the famous Galleons of the XVI-XVIIth century that blended the role of cargo and warship. This survived well into the twentieth on civilian ships, first as a precaution (like fake ports) then as a tradition on mixed and tall ships.

Nowadays the most complex hand-built moving crafts ever designed by mankind, arguably, are nuclear submarines. Specialization and optimization helped global trade in the last XXth century, and especially the XXIth one frequently called “globalized”, based on the consumer society. The challenges world’s fleets are facing are huge, traducing like always the shifting weight of nations in geopolitics. The rise of the Chinese Navy is a perfect example of this.

How Naval Encyclopedia was created

Naval Encyclopedia was born a French languard website, reborn in english in 2010. It integrated previous age of sail topics, and is mirroring tanks encyclopedia for everything related to warships…

But not only. Civilian ships has always been an interesting part of naval history, almost as exciting when thinking of huge container ships, race boats, clippers or the romance of blue ribbon luxury liners. Tanks and aviation emerged in 1915, whereas warships were already there in the Bronze age, empires makers, and are still to this day the largest, costliest, mightiest, and sometimes most complex vehicles ever designed. This website started in fact more than twelve years ago, under this very domain name, as a split between two very large chunks of Navistory, which remains a reference website since 20 years for all naval archaeology matters. Its main purpose was, and remains the study of ships and boats since the dawn of time, of the pre-industrial era, ie propelled by oars and wind. Navistory has been partially traduced but had a much needed facelift recently, as a modern responsive website. Naval Encyclopedia was the industrial era side of things. Crucially, it was entirely written in French, and it undergone a gradual translation one year ago, and this english version has been ported on WordPress, while the French-speaking version would remain (at least until all translations has been done) on a separated website. The whole XIXth century section was imported from cyber-ironclad.com.

The idea behind Naval Encyclopediae has been to cover types of ships, rather than individual ships. However for such massive machines, the heaviest man ever created, individual ships are also covered when their design is unique. The focus is more on naval warfare, rather than civilian ships, but the encyclopedia will also encompass all types of civilian ships built since the dawn of the industrial era, not only generic articles on feeders or LNG carriers. My primary sources are books, about a hundred of them accumulated over the years and carefully chosen, the fruit a true and unalterated ongoing passion for the matter since thirty years. Some depicts classic sailships of the XV to XVIIIth century for example, with tons of engravings, other is an encyclopedia of liners another a review on classic triremes, another is a repoduction of Chapman “navis architectura”, another Jean Boudriot classic ships plans, and the completed collection of four volumes of Conway’s all the world fighting ships which is the main source for this website, coupled with intersected trusted web sources. I wrote many articles for reviews, like “cabotages”, but since i’m not a naval historian, but only an enlightened amateur, i can guarantee to dismiss some false informations that has been copied over and over again, which is still the main plague on the web for some researches.

On the graphic side of things, i’m also an illustrator that has been published many times for classic, modern ships and posters over the years. Let’s cite for example National Geographic, Geo Magazine GmBh, or Mondadori group among others, and specialized reviews. Some of the illustrations depicted in navistory are indeed rare reconstructions from engravings. Classic antique ships has been on the web since so long they have been used (often without my knowledge or approval) on countless derivated works and 3D movies, included some famous ones (like discovery channel).

The bulk of these illustrations has been done many, many years ago with rotring pens, and gouache paint all at 1/730 scale and some at 1/400 and 1/200 scale. About a dozen others has been done at larger scales (up to 1/72) and some in vectorial drawing. There has been an evolution towards the all-numeric solution, either vectorial or photoshop (pixel). Here is an example of the latest one, for the upcoming Cold War Royal Navy Page:

HMS Illustrious, of the Invincible class of the 1980s.

An example of vectorial illustrations.

Early fleet posters has been pillaged by unscrupulous thugs which removed the watermarks and shamelessly printed these in China to be resold on Ebay and Alibaba. But there is a punition for this: Their posters are small, since tyey use the web version. I have the originals. They were taken from Pinterest and forums and are in web resolution (72 dpi). So, in any case, if you want a high definition poster, get one of those displayed on the poster page. These are the authentic, updated ones with ten times the size and quality of those aforementioned (300 dpi resolution, for ships at 1/730 to 1/200 resolution -even 1/72 on some cases). If you want to get one of those you can also support Naval Encyclopedia reward part of the work that has put in these, and call for more.

About the Goodies Section

POSTERS In here you will find all the posters aforementioned. Some will probably sounds familiar to you if ever you search for “fleets posters” on the web, like the kriegsmarine or the Royal Navy. It’s an ongoign enterprise, with new posters awaited, of smaller navies and other eras, and in 1918 the focus will be on posters of the cold war. Remember that you can support Naval Encyclopedia while having one of these. So thanks by advance.

LINKS A comprehensive list of useful links and rss feeds on ships, either civilian and military. This list is updated quite regularly, but you can submit new ones through the comments.

WARSHIPS VIDEOS Another project of mine was to create a dedicated Youtube Channel on naval history. But before going into this, i am creating a channel about naval history which will be also updated over time. You can subscribe of course to this.

NEWS This is just another presentation for this website posts, through a newswall. A more friendly way to see what has been published since the launch of this website.