This class of “diamonds” became the best known during the war among french subs, the only ones to gain fame within the allied forces and pass to posterity with a new class of nuclear attack submarines named in homage. This fame also came partly because of their very nature: They were the only allied minelayer submarines available then.

Development:
Constructed between 1928 and 1935 in Toulon shipyard, this class, was designed to lay mines, and carefully derived from the German UCs of the last war, but with modern solutions and innovations. The class comprised the Diamant, Nautilus, Perle, Rubis, Saphir, and Turquoise. All named after precious gems.
Design:
In particular, they had lateral mine wells of large capacity, designed by Normand-Fenaux. The system, simple and effective, will prove very useful. 32 mines could be housed in these 16 wells. The torpedo armament was reduced to two bow tubes and three (including two 400 mm) in a movable bench at the rear and less refills than usual. These mines were of the Sautier-Harlé HS 4 type, with oar. They exploded on contact with a 220 kg tolite charge, and can be laid down 200 m deep. They were lodged by pairs in each of the sixteen vertical wells inside ballasts, slightly larger than usual.
Operational career:
In service in 1936, one of these units gained prominence during the war. Not only did it escape the fate of the French navy by crossing the channel and joining the allies, but it was also the only allied submarine capable to lay mines, and its Career was meritorious.

The Sapphire, Turquoise and Nautilus were all captured at Bizerte and transferred to the Italians in 1942, and two served for some time under the name of FR112 and 116, in Bizerte. One of them will be sunk on the spot, the others scuttled. The Diamond will sabotaged and scuttled in Toulon in November 1942, while the Perle, which like the Rubis passed early on the allied side, would be sunk by mistake in 1944, a lot common to many French ships.

This most famous sub, laid down on 3 April 1929, launched 30 September 1931 and commissioned 4 April 1933, served in Toulon with the 7th, then 5th Submarine Squadrons. In 1937 she was transferred to Cherbourg on the Atlantic coast and by May 1940, she participated actively in the Norwegian campaign, laying mines off the Norwegian coast that allegedly sank four Norwegian vessels and later three merchantmen in July 1940.

The Rubis was captured in the port of Dundee, Scotland during Operation Catapult. However she turned to the Free French Forces quickly under Captain Georges Cabanier command. From there, Rubis career became quite epic, with 22 missions leading to the direct and indirect destruction of twenty-four ships of the axis (for 683 mines laid down) in addition to Norway, adding the Bay of Biscay and the Atlantic to its playgrounds. In fact she operated again in 1944 off Stavanger, claiming two auxiliary submarine chasers and two merchantmen and damaging later two others, and at the end of the year, three auxiliary submarine chasers, a German merchantman, and a minesweeper. In total she sank some 21,000 GRT by far the highest kill ratio of any French vessel.

She was visited by Royal Navy officials, and her crew was decorated notably with De Gaulle’s order of liberation in October 1941. After 1946, she was used as a training ship, retired from service in 1948 and used as a target sonar in the Mediterranean. Her wreck is still visible off Cavalaire, now a lush reef after 70 years. 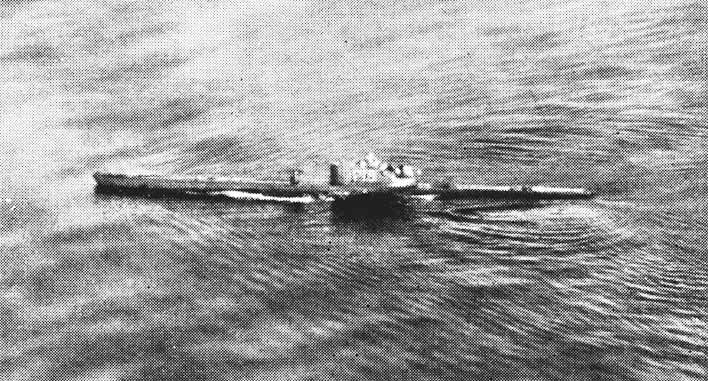 wikimedia photo of the Rubis in grave difficulties in a minefield off Norway, Coastal Command, Ministry of Information, 1942.

1/400 Naval Encyclopedia’s own David Bocquelet illustration of the Rubis in the 1930s.

The blueprints – Rubis in wartime markings and FNFL service, 1942

Another profile, as found in Cape Camaret.