Too late for the Great war

The Reina Victoria Eugenia was a single ship, close in superficial appearance to the following Mendez Nunez class, but totally different ships nonetheless, so the latter will be seen separately. They are part of these ships ordered before or during the great war, but not yet seeing the second world war as Spain remained neutral. So we talk about an interwar cruiser here, which fate was narrowly linked to the political turmoil of the interwar. And the very peculiar situation of Spain in the 1930s. She even missed most of the civil war as she was entirely rebuilt and served until 1956.

A class of prewar British design

Basically the three cruisers were part of the 1914 program approved by the Cortes (parliament) following the 1908 navy law for the building of three dreadnought battleships. These were the accompanying cruisers. The British design was then favored and in 1912, the “Town” class was the one that the Spanish Admiralty was interested in, but authorization in July 1914 meant the war erupted and the keel of the first ship was actually laid down at Ferrol NYd on March 1915 only, and completion was delayed by the provision of artillery, telemetry and other equipment from the UK. So much so that this Spanish “town” cruiser was only launched in April 1920, well after the war and completed in 1923.

In between, the Spanish admiralty has renounced to order more ships of the same sort and rather had to accept a smaller, more economical ship, known as the Mendez Nunez class, authorized by the Navy Law of 15 February 1915. They too were laid down at Ferrol quite late, in April and September 1917 to see any useful wartime completion. They were launched in 1922-23 and completed in 1924-25, by which time their design was hopelessly obsolete.

Design of the Reina Vitora Eugenia

In all-out appearance, it was like the Spaniards purchased the Birmingham class blueprints and modified the design to suit their needs. The Reina Vitoria Eugenia was a 5500 tons light cruiser, 25 knots, armed with nine 6-in guns, and with limited protection. The main differences however with the British design was that the boilers were rearranged in three separate boiler rooms, and one funnel was sacrificed while the other were better truncated.

The Armada ship Queen Victoria Eugenia (named after Queen consort Victoria Eugenie of Battenberg) was the sole cruiser built in Spain since the Reina Regente in 1906. The British design was a good way to leapfrog design advancements, at least as far as prewar design was concerned since the original ship was from 1914. She displaced 5502 tons standard, with dimensions of 134 m long (440 ft) by 15.1 m (49ft 8in) and 4.8 m in draught (15ft 9in). Crew was 404 sailors and officers. She was built at the Sociedad Española de Construcción Naval in Ferrol.

Her main armament was comparable to the standards of the time, while secondary armament was almost an afterthought:

Protection was maximized around the conning tower, with walls 6-in thick (152 mm) while the belt ranged from two to three inches (76 mm) in thickness. To be precise 1.25 in (32mm) on both ends of the belt. The decks were, as customary at that time, only 76 mm thick (3 in). However, it is not precised what type of steel was used, Harvey, Vickers or local steel.

Upon completion, Reina Vitoria Eugenia served actively with the 1st cruiser division. In January 1925, together with the Destroyer Alsedo, she went to Lisbon to commemorate the IV Centenary of Vasco de Gama.
She became the flagship of the Spanish squadron deployed in support of operations in the Rif war, in Morocco. However in 1931 Spain the Second Spanish Republic was proclaimed and the cruiser was renamed accordingly, Republica. From then on, however budgetary cuts imposed limited yearly training exercises. Compounded by the consequences of the 1929 crisis. When the civil war broke out, Republica was decommissioned, in drydocks at Cadiz on July 18, 1936 for a refit. She has been disarmed and her boilers has been removed. However she was later captured by the insurgents.

After the fall of Bilbao in June 1937, the possibility of modernzing this old cruiser was overviewed and a reform project was presented and approved at SECN’s Ferrol Yard. A towing of the ship was ordered from Cádiz to Ferrol, arriving in the end of July 1937 under the name Navarra, which had come into force on June 19. Work on the ship began in the last months of 1937, initiating clear-scrapping of the structure and better access to the machinery below out in open air.

Left side of the Navarra after refit – http://www.revistanaval.com

Work on the ship consisted, as José María González-Llanos stated:

“A tour of all her hull and equipments, which were practically new, the modification of the artillery, with six brand new 15,24 cm guns, with mounts allowing greater elevation, belonging to shore batteries. This went also with modifying deeply all the provision of accommodations and services of the ship, thus totally modernized.

The main work that was carried out was the transformation of the machinery. This ship had always been defective, due to the large direct turbines of 22,500 HP of power, which by the large masses that constitute them provoked dilatation effects and considerable relative movements, creating faults in the drives. On the other hand, radial clearances due to corrosion were exaggerated and made consumption was really excessive, to the point that the twelve mixed boilers coal-oil original Yarrow boilers that the ship had, were not able to give the steam necessary to develop the designed power and corresponding speed, of 25 knots.”

Regarding the armament, the new cruiser mounted a main battery, centerline, of six 152.4 mm Vickers cannons, delivered by the Army from the coastal artillery unit of the Cantabrian coast. For air defense, four 88mm L/45 guns were ordered from Germany and received in kits for assembly and as many Italians as Isotta-Fraschini Breda “Scotti” IF 20mm /70 machine guns were purchased from Italy. After modernization the ship’s displacement rose to 6,500 tons at full load, and length jumped to 140.8 m for 15.2 m of beam, and 5.6 m draft. Top speed was almost unchanged at 25 knots and the armor was unchanged. The crew was down to 350 sailors and officers.

Officially, reconstruction started in 1937 and was achieved in 1938.

Navarra was back in service at the end of the fight, to replace the loss of the Balearic Islands. She re-entered service in June 1938. But her usefulness was limited as she was the slowest of all three Spanish nationalist cruisers, Canarias and Almirante Cervera. 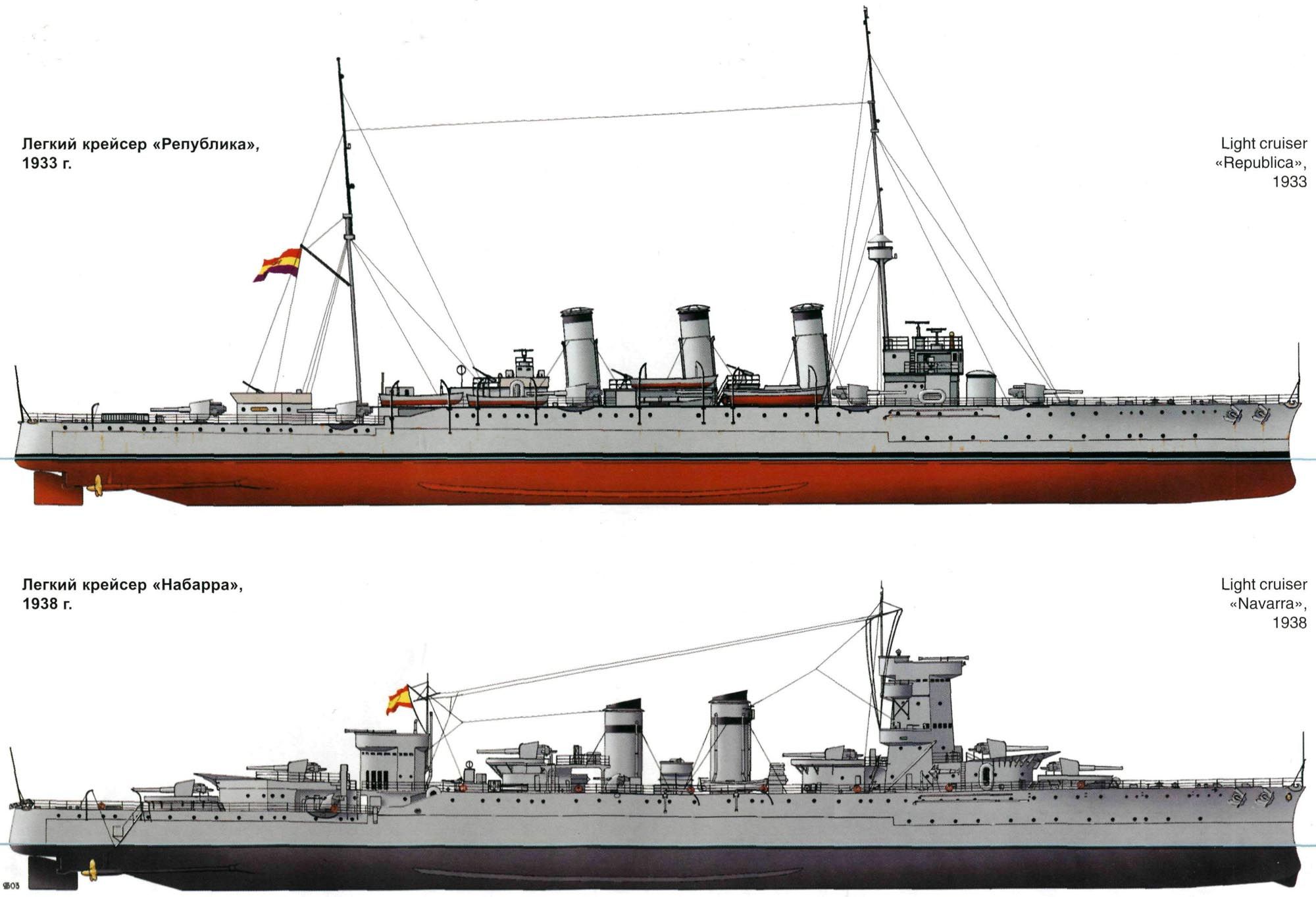 In July 1938, Navarra joined the Nationalist fleet and the Cruiser Division, along with the Canarias and Admiral Cervera, serving as a replacement after the terrible loss of the cruiser Baleares on March 6.

“Aesthetically, the new Navarra left a lot to be desired. Not only the heresy of chimneys was her main sin, but her horrible bridge, half Egyptian pyramid and half dovecote, reminiscent of the Graff Spee and the Canarias, but worse in effect as it was not high enough to escape the infernal smoke from the new chimneys, clouding permanenlty the fire control.” Navarra, despite her modernization, was mostly kept for training and served as such until 1951, in May. She was auctioned and scrapped in June 1956, and her battery however had survived. Two of her deposed guns in 1936 has been relocated at Costa J-4 in Cabo Silleiro, Pontevedra, fighting during the civil war and relocated in 1943.

Shipbucket’s modified, “rendered” profile of the Navarra in 1938