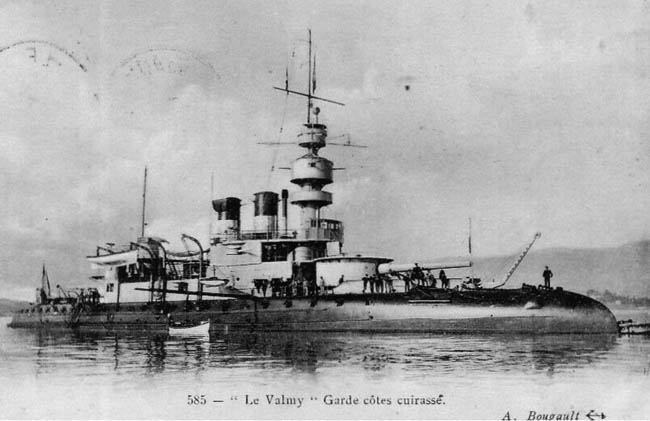 The Jemmapes class (1892) were two French coastal Battleships, part of the four commissioned in the early 1890s, quite unique in design, and completely influenced by the “Jeune Ecole” theories, with the Bouvines class. The first were assigned to the Mediterranean and the second, which had a forecastle, to the Atlantic. Although comparable to most armoured coast defence ships of the time, like the German Siegfried class, they proved a developmental dead end and none were operational when WWI broke out.

At the same time France developed a colonial fleet mostly made of cruisers in the 1880s, theories of young school also professed alongside to torpedo boats, a fleet of powerful coastal fleet to deter any approach. Its development started right back in 1862, and comprised a whole evolution (see later). The “young school” was as influencial for France A.T. Mahan doctrine was on the world’s stage, but in a completely different way.

Instead of making an historical overview of naval power and deduce the importance of overseas base networks and a fleet in being able to project itself far away before researching a decisive clash, the “yound school” professed that France would never have the same industrial output of Great Britain and being a continental power country with limited resources allocated to the Navy, contrary to the Army, France could not afford a navy of the scale the British Royal Navy had.

Instead, many engineers and officers argued for innovation to bring disruption and re-establish a balance of power via massive attrition. The torpedo seemed the idal solution, but not only. Freeing assets to defend the coasts by a heavy use of torpedo boats, submarines, and raiding the commercial ships of the enemy with armoured cruisers not only influenced the thinking of young navies such as Japan in the late 1880s and early 1890s, but also later Admiral Jackie Fisher himself, which thought that these disruptive use of the torpedo made Battleships too vulnerable.

One of the ways to deter close to the coast, additional and complementary to torpedo boats was coast defence ships, small, with a limited range, but well armored and equipped with heavy guns and rams. The development of which started with the Taureau in 1863, an armoured ram designed by Dupuy de Lôme for this sole purpose, followed by the Cerbere class (1868), before experimenting with Breastwork monitors of the Tonnerre (1875) and Tempete class (1876), and then coastal barbette ships, the Tonnant and Furieux (1880), followed by armoured gunboats, with the Fusee and Acheron class (1885).

The need to upscale these, conducted logically to the next iteration, “coast defence ships” that were as well armed and armored as any battleship, but much smaller and economical than traditional battleship, freeing them for more important overseas clashes. Their trump card here were their main guns.

In 1888, it was decided in complement to the recent barbette ships, armed with 13.4 inches (340 mm), and eight armored gunboats in construction, a class of larger vessels, armed with two turreted 13.4 inches guns and better armor, range and fighting capabilities. This ended in a basic design that was later revised into two sub-classes, the Jemmapes and Bouvines. Both were very comparable, with the same basic hull armament, armour scheme, powerplant, and heavy military mast. All four were laid down in 1890 and completed in 1894 (1896 for Amiral Tréhouart).

In French, the class was named after the sister ship completed ealier, Valmy. In Ango-saxon usage it was called “Jemmapes class” as in Brasseys and most publications, so we’ll stick to this. In 1888 so, the French amirauté, the admiralty board, wanted to upscale their coastal defence forces with four “Cuirassé garde-côtes” which can be more faithfully translated as “armoured coast guards” although in the first sense it would be more “coast guard battleships”, France using “cuirassé” (“armoured”) as a synonym for “battleship”.

They were very much designed as miniature battleships, or second-rate ones, armed wth just two guns instead of four, although French Battleships for the time usually used the same single turrets fore and aft, but complemented with two wings turrets in sponsons, armed with lighter calibers. The French artillery standard at the time was larger than 12 inches: It was the 13.4 inches (340 mm) model 1887. These very powerful guns for their day were the same used in the battleship Brennus (Charles Martel class). By their range, they were supposed to out-class British 12-inches. At the same time, their hull was designed for coastal duties, and of very low freeboard with a considerable tumblehome, caracteristic of their era. The idea was to present such hull allowed armor to be more efficient, because well sloped, and the low freeboard presented a smaller target to hit. The hull was also completed by a ram, always present on coastal ships. For ramming a sufficient speed was needed, so they were given a much more powerful machinery, enough to reach in paper 17 knots, so an improvement compared to the 13 knots of previous coastal vessels. Their basic design was approved in late 1888 and voted in 1889 FY 1890. Both were ordered to Ateliers & Chantier, Societe de la Loire (Loire NyD) that year (unknown month record). They were named after two victories, Jemmapes and Valmy, in the 1792 Revolutionary wars.

Their hull had a ratio of 5/1 (4.95 to be exact), so they would not beat any world record. Steel construction was basically identical, structurally-wise to other French battleships of the time, albeit with a peculiar shape: They had this caracteristic tumblehome starting right at the bow, which was shaped without any wave breaker. Complete with a turtle-like aft section and poop, this gave the 11 feets freeboard hull the faculty of being submerged by waves. The idea was water itself leaping around the hull the was able to bounce or stop incoming shell, and if hit, the armour slope above would complement this (see below for protection). But they were also known to plough in heavy weather, which was a problem in the north sea. As a result they spent all their career in the Mediterranean.

These 6,476 tonnes standard ships had two turrets which took almost 1/2 of the hull lenght, leaving the space in between to create a battery superstructre housing the light defence guns. There was a small bridge forward, close to the military mast, above the conning tower. There were two funnels behind and no aft mast. Service boats were installed on davits on both sides. The crew comprised 313 sailors and officers. 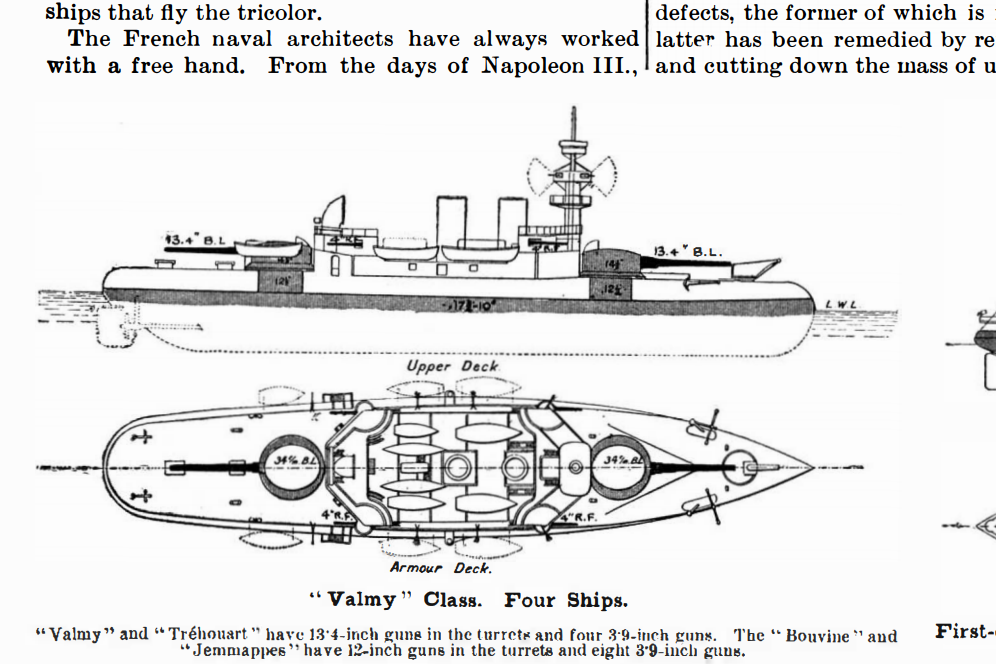 Closeup of the protection

They had a waterline belt 450 mm amidships (18 inches), 300 mm forward (12 inches) and 430 mm aft (17 inches). The lower edge connected to the citadel was a uniform 250 mm (10 inches). These figures were impressives and made them indeed impervous to any known caliber at the time. This was completed by a very heavy curved armour deck, consisting of doubled 10 mm thick plates (0.7 in total) of Krupp special steel, covered by 100 mm (3.9 in) down to 70mm (2.7 in) steel amidships, but also 90mm forward (3.5 in) and 70mm aft (2.7 in). So added to the highly sloped hull and low freeboard, this made for in theory, an impregnable internal citadel.

The turret crowns were just 70mm thick but barbettes at the turret base, above the armored deck, were 380 mm thick (16 inches). The turrets themselves were rounded ones with flat sides 450 mm (18 inches) thick. The battery superstructure was only protected against shrapnell (so probably 12 mm) as was the heavy military mast forward, built directly above the conning tower. The latter had walls 4 inches thick (100 mm).

The Jemmapes class were given a classic machinery at the time, pre-VTE (Vertical Tubes Exp.), with a two HTE (Horizontal Tubes Expansion) Machinery fed by the steam produced by sixteen Lagrafel et d’Albret boilers, for a total output of 9000 shp on two shafts, and a maximum speed of 16.7 knots. Due to the hull’s shape this was far less in heavy weather, and the ship also lost abut 20-30% when heeling over in hard turn. Her endurance was fit for her coastal role in the confines of the mediterranean, as she only carried 443 tons of coal, but still making for 3,900 nautical miles (7,200 km) at 10 knots. This gave them the ability to reach Malta for example, from Toulon.

Two 340 mm/42 modele 1887: These were powerful guns for the time, and the main argument for the construction of these coast guard ships in the first place. Compared to the Siegfried class and their three 24 cm guns for example, they were clearly superior, at least in range. It was the goal here: Keeping at bay and incoming battleships with a smaller, more economical battleship. The 34 cm (13.4 inches) were 14.7 m long, weighting 61,660 kg for a muzzle velocity of 740-780 meters per second depending of the shell (APC et SAPC), still retaining 650-655 meters per second after having travelling 2000 meters. Range was about 10,900 m in optimal conditions. This gun was developed and found also on the pre-dreadnought Brennus, and also equipped the coastal battleships and near-sister ships of the Bouvines class, as well as the rearmed Terrible class before 1914. During WW1 these would found a new use as railways guns in 1916-17.

Four 47mm/40 M1885: The always dependable Hotchkiss 5-pdr. They had been covered already in many other posts so no need to come back on these.

Ten 37mm/20 M1885: Maxim-Nordenfelt 1-pdr QF “pompom” guns intended to deal with closely approaching torpedo boats and direct shore support for landing parties. They were installed in part in the heavy military mast (four), and superstructures. *note: Navypedia states these were quintuple nordenfelt guns, but it’s contradicted by Conways, or this was the planned armament, later replaced by single 1-pdrs.

Two 450mm Torpedo Tubes: These 17.7 inches tubes were installed on the broadsides underwater, and designed to hit below the waterline.

For fire control, the two main guns were provided with two “appareil de pointage, 5 plans”, corresponding to five parameters or speed, range and more. The ships also carried an “Appareil de visée à lunette (1 plan)” so a main telemeter stabilized on one plan, and a fire table.

The construction of Jemmapes started at the Ateliers et Chantiers de la Loire, Saint-Nazaire in 1890 at a cost of 14.473.000 F. She was launched in April 1892 and commissioned in 1895. In 1900, she was part of the Mediterranean squadron and participated in many major manoeuvers, notably simulating an attack on Mers el-Kébir. She was finally struck in 1910, sold in 1927 to be broken up, playing no part in WW1, but her guns were, from railways.

Construction of Valmy started at Ateliers et Chantiers de la Loire in Saint-Nazaire, by 1890 at a cost of 14.473.000 F; She was launched in octobre 1892, then commissioned in 1895. Her first commanding officer was Commandant Manceron (1896-1898). During her service in the Mediterranean, she took place in many exercises and manoeuver drills year round. Due to her short range she rarely ventured outside Toulon and Mers el Kebir and other ports of North Africa. She was eventually stricken from the navy list in 1910 puis and sold for BU in 1911. Like her her sister ship and the Bouvines class, her guns were reused on railways on the western front 1916-1918.

Why such as short service ? Indeed, from 1895 to 1910, only fifteen years passed. This was short in battleship standard, but in 1899-1900 the marine minister J.M. De Lanessan started to completely discard every thoughts related to the Jeune Ecole doctrine for a more conventional approach, notably about building new series of homogeneous battleships. The cost of retaining these vessels, overtaken by obsolescence due to new artillery development, and freeing able crews, became chief concerns there. Germany did the same with their own Siegfried classes, which were in their case more a stepping stone towards better battleships. The Royal Navy never experimented with comparable coastal battleships, considered as a second-rate fleet asset, as torpedo-boats and minelayers.

jstor: FROM A PRESTIGE FLEET TO THE JEUNE ÉCOLE: French Naval Policy and Strategy under the Second Empire and the Early Third Republic (1852–1914)

The Jemmapes disarmed in Rochefort, 1911 (atlantic coast), waiting to be scrapped

None found ! Bouvines class were covered though.