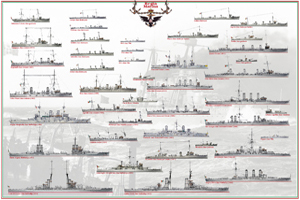 An amalgamation of local navies

Like Germany, Italy was the result in 1914 of a recent unified political construction, but predated by nearly ten years: The Unified Kingdom of Italy was proclaimed on 17 March 1861. From then on, the Italian navy was born, as the result of gathering disparate units from the Duchy of Bourbon, Sardinia, Tuscany, Papal States and Sicilia. The bulk consisted of the Sardinian warships – by far the most powerful with that of Bourbon, then Neapolitan Navy, all very well equipped. Under the impetus of Count Di Cavour, the peninsula’s leadership hero figure, supported by Garibaldi, the Sardinian/Piedmontese combined fleet became the most modern in the Mediterranean, spawning notably the first Italian battleships. The Battle of Lissa, which the Austrians consider to have won, remains a bitter memory for the Italians, in spite of a true naval potential in 1866. The Battle at large also consecrated the great return of ramming as a naval tactic (since the antiquity), launching a durable fad in hull design that will last until 1906 (The Dreadnought too had a ram, and used it in anger). The Italian fleet at Ancona after the battle

After Lissa, budgets were reduced and the confidence given to the navy largely decreased. Augusto Riboty in 1871 owes the desire to inject new blood to his fleet. He did it superbly, in particular by ordering the series of battleships Duilio and Italia, armed with formidable (unmatched then worldwide) pieces of artillery. These cannons were in addition modern and rapid-firing, and the feat surprised and alarmed the British Admiralty for its own assets in the Mediterranean. The great Italian engineer Cuniberti designed a range of truly excellent ships, including the last pre-dreadnoughts battleships, which were “near-dreadnoughts” in a sense, lacking a true monocaliber gunnery just because he had not been granted the right budget.

Cuniberti’s four Regina Elena, were indeed considered the best in the category, thanks to a formidable secondary armament. Cuniberti wrote in an article published in Jane’s fighting Ships its famous plans of the Ideal battleship, a sort of modernized armoured cruiser, fast but equipped with same caliber heavy weaponry. The Admiralty, after lessons learnt at Tsushima, had been interested in it, and eventually “Jackie” Fisher ordered its most famous ship: The HMS Dreadnought, first monocaliber battleship worldwide. In 1894-95 reverses in Africa were still detrimental to the navy, and it would be necessary to wait for the ministry of navy Carlo Mirabello for a new ambitious plan to be voted. Funds were still modest though, and construction of new heavy units was affected not only by some tradeoffs but also delays of 7 years to 10 years between the first drawings and tests, which rendered obsolete these ships when entering service. However, they were distributed in homogeneous classes, and of certain quality.

On a strategic level, Italy had to face the Turks, Greeks, Austrians, but its tonnage was largely able to face these three fleets, even combined. The Greeks never had serious enmities towards the Italians, and only possessed a modest coastal force. It was quite the opposite with the Ottoman Navy, once so powerful, which remains a threat for the whole Eastern Mediterranean, and the Black Sea. In the Adriatic, it was of course Austria-Hungary, Italy’s great rival. The Italians sought since Lissa to obtain reparation for the outrage they had sustained on the part of Rear Admiral Tegetthoff. However, this rivalry lost ground for political reasons, since Italy became been part of the triple entente in 1885 (Germany-Italy-Austria-Hungary). In 1914, Regia Marina (“Royal Navy”) was ranked seventh in the world, ahead of the Ottoman Empire, Austria-Hungary, the Armada (Spain) and the Dutch, but behind the French, Japanese, Russian, German, American and British fleets. She could count on paper 17 battleships, 32 cruisers, 33 destroyers, fifty torpedo boats and a handful of submersibles. However, of these forces, the oldest cruisers (1885), were too small no match for the speed of modern naval operations, while the oldest battleships has been retrograded as coastguards or even dockyards and depot ships of batteries or torpedo boats, being totally obsolete.

Second-class torpedo boats were not of national construction, but came from the three great specialists of the time: Vosper-Thornycroft in Great Britain, Normand in France, and Schichau in Germany. Its cruisers were fairly light for the most part, and apart from the San Giorgio (1911), were inferior in tonnage and armament to their equivalents in the other navies. Italy’s first Dreadnoughts on the other hand, begun a little late in relation to other Nations except Austria-Hungary, were quite modern and integrated triple turrets, like the contemporary American and Russians 2nd generation dreadnoughts. *The magazine of Alfred Jane, a British subject, was complementary to the Brassey’s naval annual and well known in naval circles worldwide. Aside being directories of warships around the world, Jane’s was famous for its collection of articles related to tactics and naval strategy. Jane’s fighting ships had precise descriptions of the latest ships released, but also incorporated technical articles, including those of engineers of worldwide reputation like Cuniberti. War Constructions:
Its war production is characterized mainly by a large use of light units: destroyers, submersibles, coastal bombardment gunboats, but above all a real horde of MAS torpedo boats (Motoscafi Anti Somergibli), widely used as anti- Submersibles, which infested the Adriatic and offered themselves with impunity sumptuous pictures of hunting. These torpedo-launching units, famous with their powerful engines, their light construction, added to the individual audacity, did wonder. The Regia Marina at war

Early Operations (1914-15):
The question deserves to be asked: What would have happened if Italy had definitely committed itself alongside the central empires? Indeed, in August 1914, his position was ambiguous. It had claims on the side of France (Nice, Savoy, Tunisia), but also on the side of its allied supposed neighbor, Austria-Hungary, for territories in the Alps and the Adriatic. When the Franco-British combined fleet entered the Adriatic, Admiral de Lapeyrere arranged to cross his fleet near the Italian coasts in order to act as a deterrent. Colorized photo of the Caio Duilio, completed during the war

In terms of balance of forces, the involvement of the Italian navy alongside the Austro-Hungarian fleet was certainly difficult to manage for the allied forces present: Before the Dardanelles affair, the Royal Navy had on site only Of a handful of buildings (two battle cruisers, moreover quickly solicited in the Von Spee hunt in the Atlantic, and two cruisers-battleships, but not a single ship of line, even old). The French navy was entrusted with the command of naval operations in the Mediterranean, the Royal Navy reserving for itself the North Sea.

The weight of the Italian navy was numerically inferior to that of the French navy, but in 1915 the two combined fleets (Italy and Austria-Hungary) would have had 9 dreadnoughts as against 7 for the French, and there was no The possibility of the Royal Navy separating itself immediately from one of its precious dreadnoughts (which it did however by sending the Queen Elizabeth to the Dardanelles in 1915). In the case of “classical” battleships, the two fleets would have aligned 22 units against 23 for the French. As for cruisers finally, they would have aligned 35 against 36 to France.

As we can see, the forces were comparable, and the former had the disadvantage of having to coordinate their actions. However, this question was settled by a secret treaty concluded in London between the triple agreement and Italy on 26 April 1915. The latter offered to Italy in exchange for its engagement alongside the allies of the territories in the Adriatic and the Balkans, Taken to Austria-Hungary and Turkey.
President of the council Antonio Salandra had rather neutral views as the majority of the population, despite the demonstrations of nationalists carried by the poet Gabriel d’Annunzio, or Mussolini who militate to take back the “irreverent lands”. The secret treaty comes to the public at the same time as a denunciation of the triple entente on May 3 and Salandra saw his government overthrown by the parliament.

King Victor-Emmanuel, favorable to the war, recalled him. On May 24, 1915, Italy committed itself definitively by declaring war on Austria-Hungary. The navy was then largely involved during the conflict against an enemy located on the eastern coast of the Adriatic, which conducted limited operations due to its manifest numerical inferiority. There was never a real battle between the two fleets, except skirmishes and some punctual clashes, as well as isolated actions by individuals and small crafts but of spectacular results.
In the absence of a decisive confrontation, the Italian admiralty fell on submersibles and small crafts, especially relying on light units of the MAS type, of which they made considerable use. The mine warfare was also a priority, and the many “RD” type are there to testify of its importance. Numerous attempts were made to force Pola harbour. Late operations 1916-18
The project of blasting the Habsburg fleet was a veritable manifesto of individual bravery and recklessness. Passing by in particular the heavy nets of steel mesh through the passes required the construction of singular machines like the tracked “Grillo”, a kind of equivalent naval response to the problem of barbed wire for the infantry, which led to tanks. By virtue, the were also the first amphibious “tanks” used in action, although they should be more assimilated to boats. See “boats or tanks? -The Grillo machines” Italian MAS BMTs at sea. Their successes led to more constructions in ww2.

Finally, the Italian navy made great use of “monitors”, especially at the end of the war. Some of them were real battleships, such as Faà di Bruno, equipped with the Carracciolo cannons (after its construction has been halted), others were simple pontoons, or barges, equipped with heavy artillery. They bombed coastal installations but also supported the Italian troops on the front line, near the coast.