The two heavy cruisers of the Aoba class followed the Furutaka a year apart, so that their development did not take into account the defects of the two previous ships. They had from the start three double turrets and AA parts of 120 mm. On the other hand their tubes were always in six groups of two on the flanks. A first modification intervenes in 1932: They received 8 machine guns of 13.2 mm in reinforcement. In 1938-40, their fixed tubes were replaced by two quadruple rotating benches on the deck, while they were equipped with lateral ballasts. Their DCA was reinforced with 25mm guns and another four heavy machine guns, bringing the total to 12.

❮❮❮❮❮❮❮❮❮❮❮
⚠ Note: This post is in writing. Completion expected in late 2022.
❯❯❯❯❯❯❯❯❯❯❯

In operations, the two ships were all fights. Particularly active in the Solomon Islands, they participated in the “massacre” of the Savo Island, the night of August 8, 1942. The Kinugasa was sunk by a plane embarked on November 14, 1942 during the second battle of Guadalcanal, while the Aoba survived long enough to see his armament increase to 15 pieces AA 25 mm, then 42 two months later, in May-June 1944. He was also added a radar, while he lost one of his two banks of tubes launches -torpilles. He was at the Battle of the Coral Sea, at the first battle of Guadalcanal, at the second, and was finally wiped out by the raids of the 3rd US Air Fleet at the Kure Naval Base on July 25, 1945. 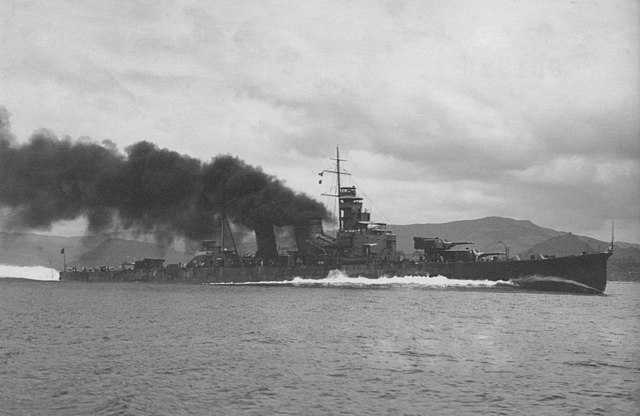 Aoba (青葉) was first of her namesake class to be completed (Named after Mount Aoba, a volcano located behind Maizuru, Kyoto) after being Launched in 1926, and heavily modernized in 1938-40. IJN Aoba patrolled along the China coast and from December 1941, she became flagship of Rear Admiral Aritomo Goto, CruDiv 6. She participated in the Battle of Coral Sea in May 1942, the The Battle of Savo Island, 7 August 1942 (damaged) against USS Astoria, Quincy, Vincennes and HMAS Canberra, the Battle of Cape Esperance on 11 October 1942 against USS San Francisco, Boise, Salt Lake City, and Helena (she was hit by up to forty 6-inch and 8-inch shells), was repaired spent time in Kure, statione din Singapore from 24 December 1943, soldiered in the Philippines, heavily damaged, repaired again and finally crippled by bombing, sinking in the shallow waters of Kure harbor in April 1945, followed by more damage after two raids in late July and finished off on 24 July 1945. She was formally stricken on 20 November 1945, her wreck scrapped in 1946–47.

Second ship launched and completed of the class, IJN Kinugasa, named after a mount. She was flagship of the 5th CruDiv, then 6th and 7th. During a training exercise on 11 July 1929, she collided with I-55 while using the cruiser as a target practice. She also served off the China coast (1928–1929), making other patrols there in the 1930s, place din reserve by September 1937, extensively modernized at Sasebo and recommissioned in October 1940.

she was undamaged, and back in Truk in July, reassigned to the 8th fleet. She fought at the Battle of Cape Esperance on 11 October 1942, damaging Boise and Salt Lake City but taking four hits and was back to the Shortland. She met her fate at the Naval Battle of Guadalcanal: On 14 October 1942, as flagship Crudiv 6 she teamed with Chōkai to bombard Henderson Field and covered on 24–26 October and 1–5 November replacement convoys of troops.

On 14 November, she was attacked by USMC land-based Grumman TBF Avenger torpedo bombers and Douglas SBD Dauntlesses from USS Enterprise. The attack started at 9:30 and at 11:22, she capsized and sank off Rendova Island, stricken on 15 December 1942.