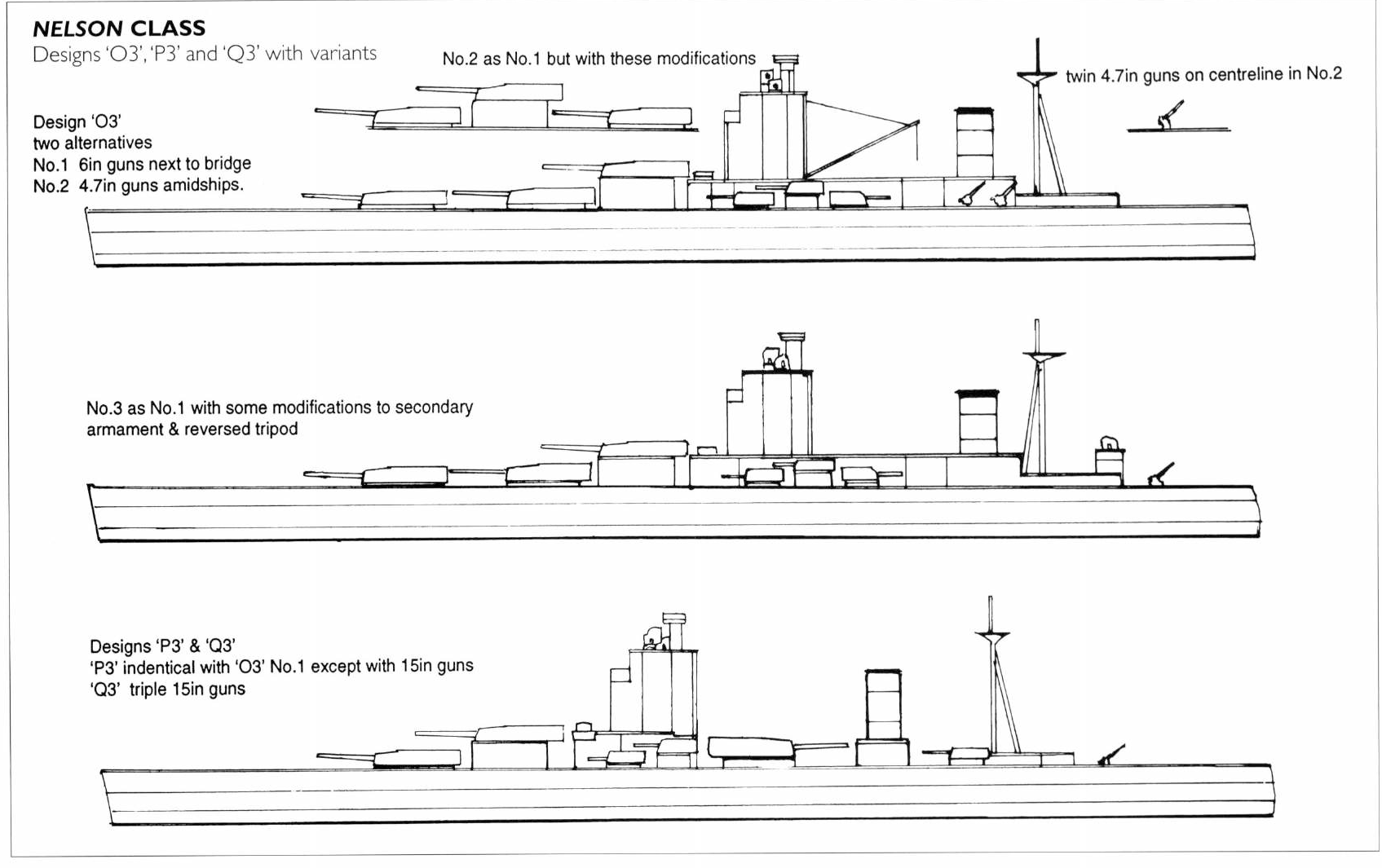 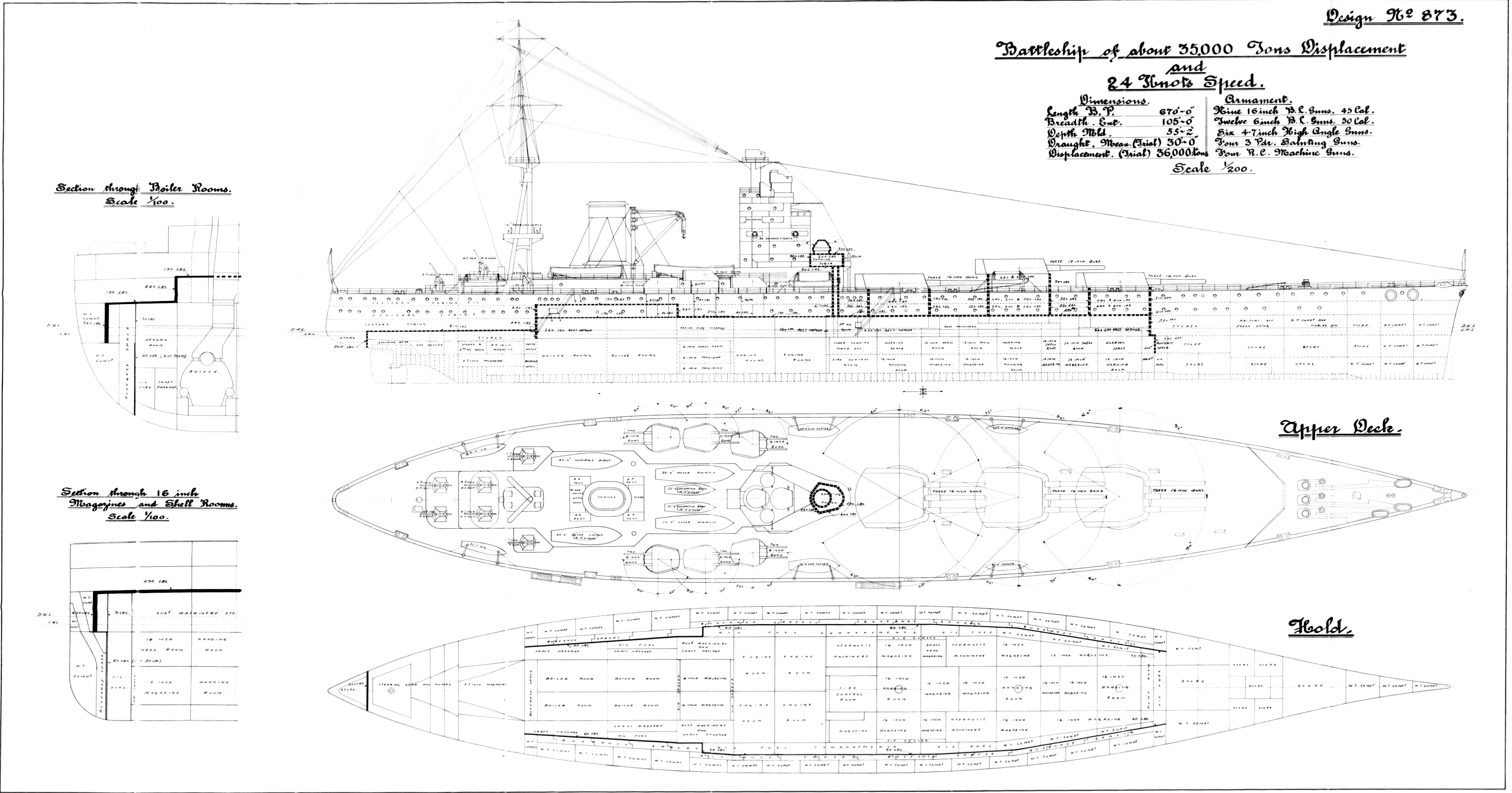 Genesis of the Nelsons

The Nelson are interesting and atypical battleships. They were compromises directly derived from designs developed in 1918-1920 that took into account the lessons of the Great War at sea, and especially and especially the Battle of Jutland, the only major commitment or the ships of the line were seriously tested. Most naval engagements of the Great War were skirmishes of battle cruisers. On the other hand, Jutland showed the limits of their concept. Against other similar buildings (here in this case Germans), protection was essential. The British losses were mainly attributed to this undeniable factor: The protection of German buildings comparable was much better, as the engineers discovered much later by analyzing the wrecked Hindenburg wreck at Scapa Flow in 1919.


⚠ Note: This post is in writing. Completion expected in 2022.
Src Tzoli The many designs that were developed by the admiralty thus consisted in tending towards a battleship battle cruiser model, in fact the prototype of the "super-dreadnought". Thus in the cartons, were developed battleships of the type G3 armed with 406 mm pieces and others type N3 armed with parts of the type N3, 457 mm. All the other nations of the time were thrown into the same escalation of power and tonnage. The treaty of Washington (1922) came to put a good order. In particular, it halted the continuation of the construction of the Hood (1920), leaving the latter without sister-ship and killing in the ouef most projects, stopping net construction of other buildings in progress.

Thus, it is by modifying the plans of the G3 that the Admiralty managed to render "in conformity" with the treaty their future Nelson. But this inevitably led to many compromises in order to satisfy the treaty while at the same time protecting the armament/protection/speed balance. In fact they were nicknamed after their entry into service as the class of "Cherry tree", the "trees pruned in Washington". The "dry" displacement (excluding oil and ballast) projected was 35,000 tonnes. The main artillery was placed in the front, not to counter the conventional tactic of "bar the T", but to reduce the weight of the armor by restricting the length of the battleship.

The secondary armament was of course no longer in barbettes, distant legacy of the pieces in ports, but in semi-automated turrets grouped at the rear. For the rest, the principle was the "all or nothing". The protection was generally internal, notably using deflecting and non-straight surfaces. On the other hand, for the first time, they had a battleship bridge, designed to counter the plunging parabolic firing and bombs of planes. The machinery was reworked, and for the first time since the dreadnought it came back to two propellers. More efficient boilers and oil heating made only one funnel sufficient. The hull had been hydrodynamically trimmed for maximum efficiency, but in the end the speed was not to exceed 23 knots, which was hardly better than the "classic" battleships of the previous generation.
The Nelson and Rodney were started in 1923-24, launched in 1925-26 and completed in 1927. They had been built partially by reusing material from ships canceled after 1922. They were the first battleships "treated" with the King George V after a moratorium of ten years, and the first of a new kind. They were not, however, really "fast battleships" because of the many concessions made to the tonnage. Their rather astonishing superstructure nicknamed "queen anne's mantion" as the brick buildings it recalled made, still to save weight, largely appeal to aluminum. The fir tree was also widely used, rather than the teak on deck, for its weight. The shape, height and position of the superstructure, which included the blockheus, acted as a "sail" which distorted the maneuvers at low speed. The ships were also little maneuvering, with a very long circle of turn. The artillery also distinguished itself from previous uses, with the adoption of triple turrets for the first time, and parts preferring shells lighter but with better velocity, like the German buildings of the Great War. Finally, for the first time, an advanced semi-electronic fire control system of the HACS type was used for the DCA and Admiralty Fire Control Table Mark I for the main artillery.

The peculiarities of the unusual silhouette of this class made it that in 1939 they were nicknamed sarcastically by their crew and the Navy in general Nelsol and Rodnol, in reference to the tankers then in use in Britain whose name always ended with " ol ". Nevertheless they proved their value during the Second World War and were often in the foreground. They were modernized only by adding a radar and a large DCA, mainly quadruple 40mm AA Bofors and Oerlikon 20mm under masks. In addition, quadruple carriages of 12.7 mm were considered too light. Author's illustration of the Rodney in 1942

The Nelson class in action

Nelson, the fourth building bearing the name of the famous Admiral in the Navy, was built in Newcastle by Armstrong-Withworth and commissioned in August 1927. She was the flagship of Home Fleet based at Scapa Flow. His crew mutinied in 1931 (the great Invergordon mutiny). In 1939, they participated in escort missions and was based in Scapa with the aim of intercepting German ships passing by the northern route to the Atlantic. He never got there during their different outings. Off the Orkney Islands, it was torpedoed on October 30 by the U56. Fortunately, none of the three torpedoes launched against him exploded. Then in December, he struck a mine in Loch Ewe and was sent to Portsmouth for repairs until August 1940. I was then deployed to Rosyth to counter a possible invasion by the sleeve, then in April-June 1941, was assigned to 'Atlantic.

HMS Rodney after refit in Liverpool

In May, he was in Freetown, East Africa, and ordered to enter Gibraltar on an emergency basis during the Bismarck affair. After the participation in this episode (from a distance, he never reached the place of the final confrontation), he was sent mediterrannée to join Force H. He was torpedoed by a plane in September 1941 Italian and had to go back England for repairs until 1942. Later returned to Force H, he was based in Malta and took part in convoy escort to North Africa. He participated in Operation Torch, in Tunisia, in the invasion of Sicily, and the Italian armistice was signed on board in November 1943 between Eisenhower and Pietro Badoglio.

She then returned to England for the addition of a powerful additional AA, and then participated in D-Day. Damaged by two mines, he was then sent for repairs to the arsenal of Philadelphia. From January 1945 he was posted to the Far East, based in Colombo, to support operations in Burma and Malaysia. In September 1945 he received the surrender of Japanese troops from the area at Penang. Returning in November, he spent the rest of his service in the home fleet until 1947. Not being modernizable nor usable in the context of the cold war, he was sent to scrap. Nelson opening fire during maneuvers in May 1942. It was feared that with the structural weakness of these ships it was impossible to draw a full flank of flank. The opposite was demonstrated when the Rodney fired volley after volley without problems on the Bismarck.

HMS Rodney, on his side, had a fairly similar career but owes his fame to his fight against Bismarck in May 1941. The giant was still operational although his direction was then inoperative. The Rodney himself had undergone work because of his weak rudder. Built Cammel laird, Birkenhead, and Launched in December 1942, he was accepted into service in November 1927. His crew took part in the Invergordon mutiny in 1931. In September 1939 he was based with Home Fleet at Scapa Flow, and was deployed to escort convoys and block the passage to the Kriegsmarine raiders. His slow speed did not allow him more than Nelson to fulfill this role. He participated in the fighting in Norway and was hit by a German device, the bomb struck his bridge but did not explode. He was repaired, however. On March 16, 1941 during an escort in the North Atlantic, he saw the Scharnhorst, but the latter folded when he recognized it in turn. He then participated in the Bismarck hunt with the King George V. After the parabolic fire, the Rodney completed the Bismarck by direct fire at short distance, literally tearing it to pieces. He then had to sere for lack of fuel, having exhausted virtually all its large caliber ammunition, which says a lot about the resistance of the German battleship. We now know that the latter was scuttled. After a trip to Boston for his machines, Rodney joined Force H in Gibraltar. He left for operations in Malta, Operation Torch, and the landings of Sicily and Salerno. In June 1944 he prepared the landing of D-Day by shelling fortified points of the Atlantic wall, then participated in convoys of Murmansk. Because of his multiple problems of machines and that his modernization was never at the level of Nelson, it was placed in reserve as of December 1944 with Scapa Flow and demolished in 1947.