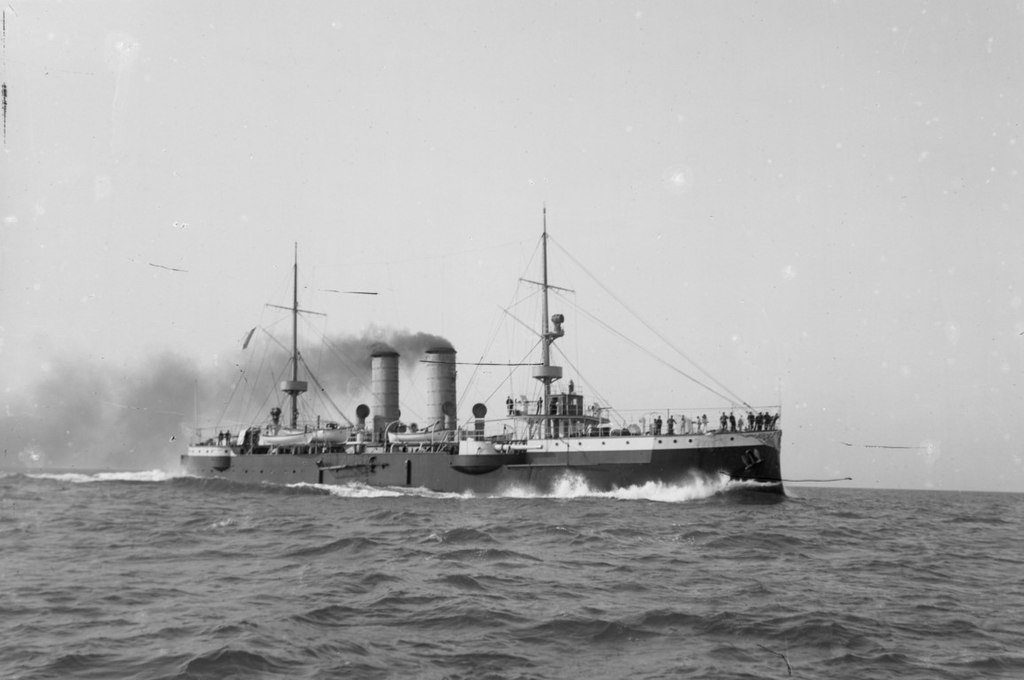 In the early 16th century, Portugal, the most prosperous nation on earth thanks its innovations in navigation, exploration and conquest had an immense colonial Empire strectching from the coasts of Africa, to South America, the Indian Ocean, Indonesia and even China. However the great wheel of nationhood veered in favor of northern powers, notably France and Britain, and the Portuguese fleet gradully dwindled, following many successive budget cuts in the XVIII and XIX centuries. So much so that in 1870, despite a 800,000 square miles empire, the country proved unable to manage and exploit it, and the fleet was just two 28-guns steam frigates and a single 14 guns corvette as well as six wheeled steamers (26 guns each), the sailing ship Vasco da Gama (74), Dom Fernando (50), and three 14-guns corvettes.

Maintaining its empire and defend her insterests worldwide became problematic, so at least to defend the capital and Tagus, entry into the country, it was believed that a modern, armoured and armed with modern rifled guns was necessary. No local yard could handle this and so, the new government managed to negociate construction of a small but modern and tailored ironclad in Great Britain. Indeed, the ship would have a tonnage no more than 2,300 tonnes, but be well armed and well protected. 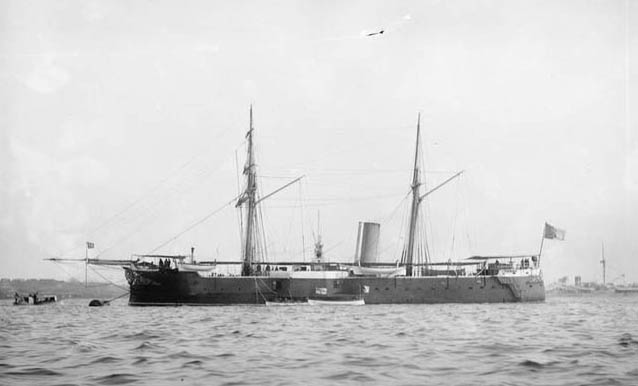 Vasco Da Gama 1895
The new Vasco de Gama thus became the only capital ship of the Portuguese Navy ever built. She was ordered from British shipyard Thames Iron Works, Blackwall, London to defend the capital Lisbon. She was a rather small, “coastal” ironclad compared to the 12,000 tonnes ships built at the time, but with a central battery and Barquentine rig. No longer relevant at the end of the century, she was extensively reconstructed in 1901-1903. So much so her new appearance was completely new, as well her size, equipments and armament. Now looking like a cruiser, she served during WWI as Portugal remained neutral, and was discarded in 1935. 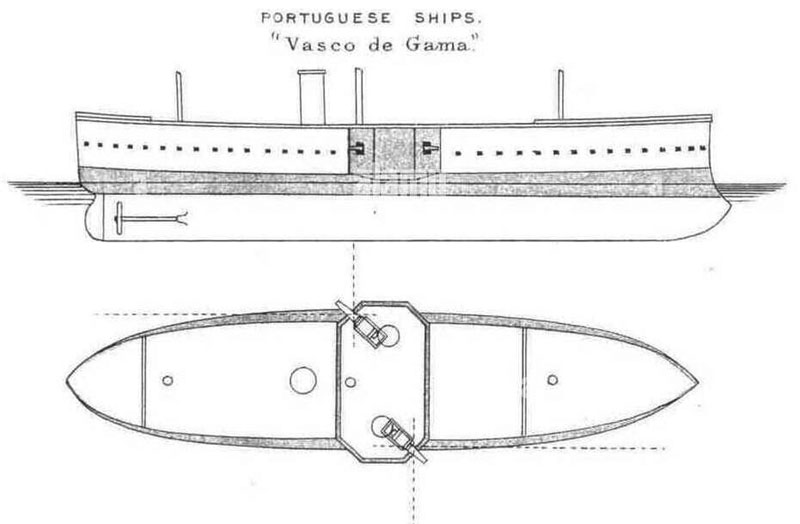 Vasco da Gama had a marine steam engine, driving a single screw propeller and steam pcome from four (assumed to be four) boilers truncated into a single exhaust a funnel slightly aft. The senemble was rated at 3,000 indicated horsepower (2,200 kW). This was enough for a designed top speed of 10.3 knots (19.1 km/h; 11.9 mph). Later in the 1880s her riggng was simplified as a two-masted barquentine rig. In all between the artillery, steam engine and rigging she needed a crew of 232 officers and men.

Her original main battery comprised two 10.2 in (260 mm) guns in a central armored and octagonal box, amidships. Each gun was mounted on semi-circular tracks for 90° traberse, with two gun ports for each, while the box overhanged beyond the sides to allow fire in chase and retreat. A single 5.9 in (150 mm) deck gun was mounted on her stern, with large traverse, likely to fire incendiary bombs (Paixhans type). It seems in the 1880s she received four 9-pounder guns for close-range defense against torpedo boats.

Vasco Da Gama was protected with a complete iron armored belt, 4 inches (100 mm) thick on either end, 9 in (230 mm) amidships, protecting ammunition magazines and over the machinery spaces. The main battery box amidhships had the thickest armor plating, from 6 to 10 inches (150 to 250 mm).

profile after reconstruction
Vasco Da Gama was already modified in the late 1880s (exact date unknown), with the rigging reduced and simplified, and four 9-pdr QF guns for anti-torpedo defense. But the major reconstruction, complete, intervened between 1901 and 1903 and was performed at the italian Yard Orlando, Leghorn after an international call to tender. She was drastically reconstructed, the most impressive feat being the hull cut in half and lengthened:
She received indeed an extra 32 ft 6 in (9.91 m) long section amidships while the central casemate was eliminated and the artillery completely modified in locations and types altogether. Her final dimensions were: 70.9 m between perpendiculars (232 ft), same beam, without overhang or tumblehome, but 6.27m (20.57 ft) in draught.
The fact she was lenghtened so cut in half, allowed engineers to also removed the antiquated engine, replaced by two modern VTE steam engines (triple expansion), and far more modern and powerful Yarrow powerful water-tube boilers, the ensemble being rated at 6,000 ihp (4,500 kW) for a top speed to 15.5 kn (28.7 km/h; 17.8 mph).

She also received a brand new set of superstructures, including a modern bridge, two pole mast for wireless telegraphy, while the armament was completely renewed as well. Her armour scheme was also modified: The old iron belt armor was removed, replaced by a stronger, modern steel armor belt. It is unclear if this was complemented by an armoured deck.

For armament, she gained two brand new 8 in (203 mm) L/40 guns, located in sponsons forward, port and starboard, about at the the level of the bridge. A new long-barreled 5.9-inch L/45 gun was installed aft, and six 3-pdr were also installed for close-range defense, apparently in addition to the earlier 9-pdr models. The crew rose to 260 officers and men displacement jumped to 2,972 metric tons (2,925 long tons; 3,276 short tons) in normal draught, 3200 tonnes fully loaded.

She stays the same for after WWI. In 1922: the armament was changed again, with a single 203mm/40, remaining and a single 76mm/40 AA gun installed from Vickers, plus a single 102mm/40 QF Mk IV dual purpose gun installed aft, in replacement of her 5.9-inch L/45. Her 9-pdr QF had been removed at this point but she probably still carried the 3-pdrs. 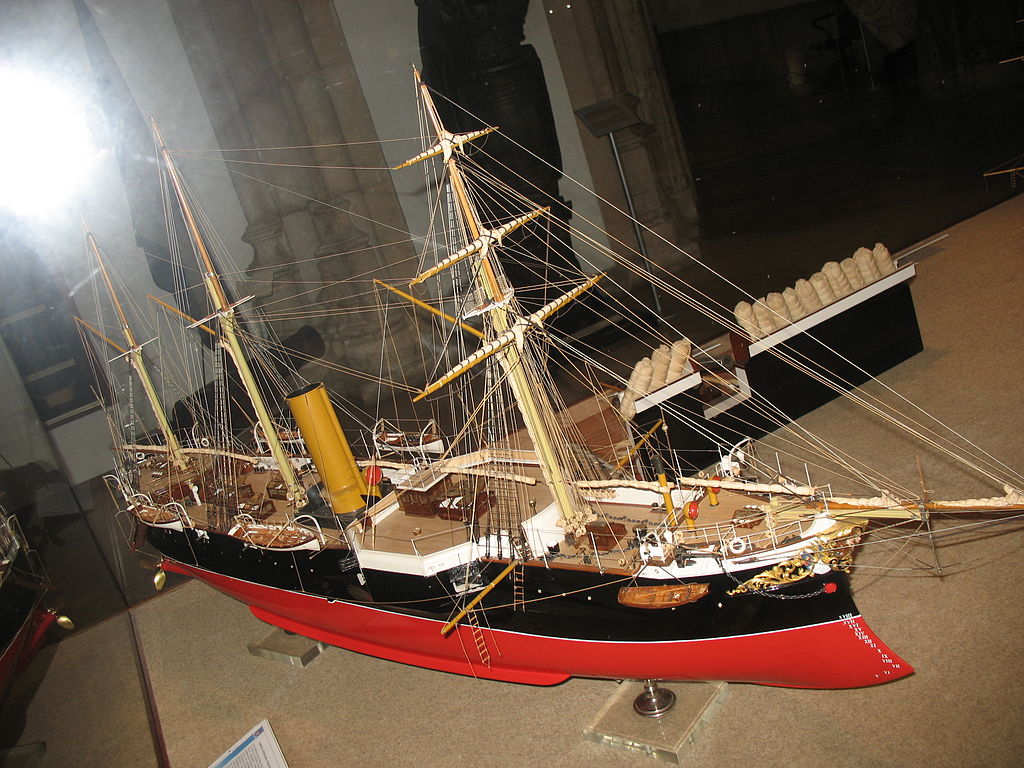 A Yard model of the Vasco da Gama as completed in Lisbon Museum. It clearly shows three masts and not two as frequently seen.
None found yet ! 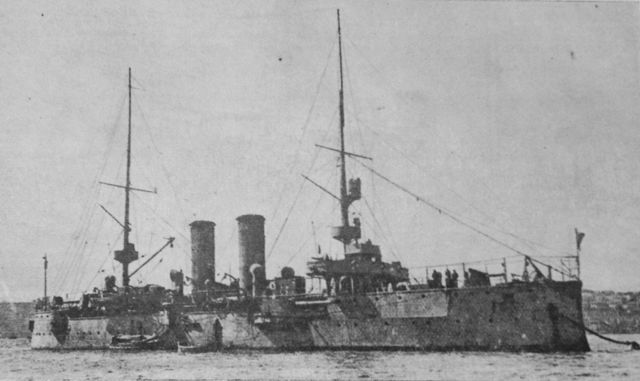 Vasco da Gama, laid out in 1875 at Thames Iron Works of London, launched in 1876 would have a long career, which stopped short of WW2. Completed in 1878 and classed by the Portuguese as an “armoured frigate” due to her size, Vasco da Gama became nevertheless the only “battleship” ever in the Portuguese navy. When after her sea trials and official acceptance she arrived on the mouth of the Tagus after her trip from Britain via the channel, bay of biscay and Basque coast, immense crowds invaded the shores to gret her out. Sge arrived in Lisbon surrounded by hundreds of shuips, all flags out.

At first, she operated as planned, as part of the coastal defense of Lisbon, the capital. She was also tasked to patrol the mouth of the Tagus. On June 26, 1897, she participated in the Spithead Fleet review in celebration of Queen Victoria’s Diamond Jubilee, under command at the time of Captain Barreto de Vascomellos. The rest of her career was unevenftul, between periods of maintenance and inactivity and patrols at sea.

Vasco da Gama after refit, with her 1900s colors.

In 1901, the Portugsuses Navy staff was fully aware she needed a radical modernization, or facing the scrapyard. After funds were secured at the parliament, an international call to tende saw the Orlando shipyard drydock in Livorno, Italy, chosen for a major rebuild based on their proposed reconstruction design. It was indeed radical: She was cut in half, elongated, received new enginesat 6,000 ihp (4,500 kW), being able now to reach 15.5 knots (28.7 km/h; 17.8 mph), but still ran on coal. Her armour was modrnized and her whole battery modernized also. Her displacement rose as a result, but she was still small for even a cruiser at that time. The reconstruction works last two years, as she was completed in 1903. After sea trials and full acceptance she made a training cruise in the Western Mediterranean until reaching Gibraltar and transiting to the Atlantic.

Nothing much happened during her later career, she had exactly the same role. On August 27, 1907, however she was wrecked by an accidental gas explosion, injuring several crew members. The political unrest of April 1913 saw part of her crew excluded for their disloyalty to the new Government, as they were planning a coup against the First Portuguese Republic. On May 14, 1915, they mutinied and killed the ship’s captain. Vasco Da Gama then proceeded to Lisbon and shelled the city, killing a hundred, harming the very city she was tasked to defend. Despite of all of this, Vasco da Gama remained the Portuguese Navy flagship until WWI broke out. A replacement or new modernization was rejected due to budgetary constraints, and although obsolete by 1918, she remained active until 1935 listed as a coast guard vessel, slightly modernized in 1922. Eventually she was sold for scrap in 1935.

A nice, large image of Vasco Da Gama in post-reconstruction sea trials, 1903, off the coast of Italy.