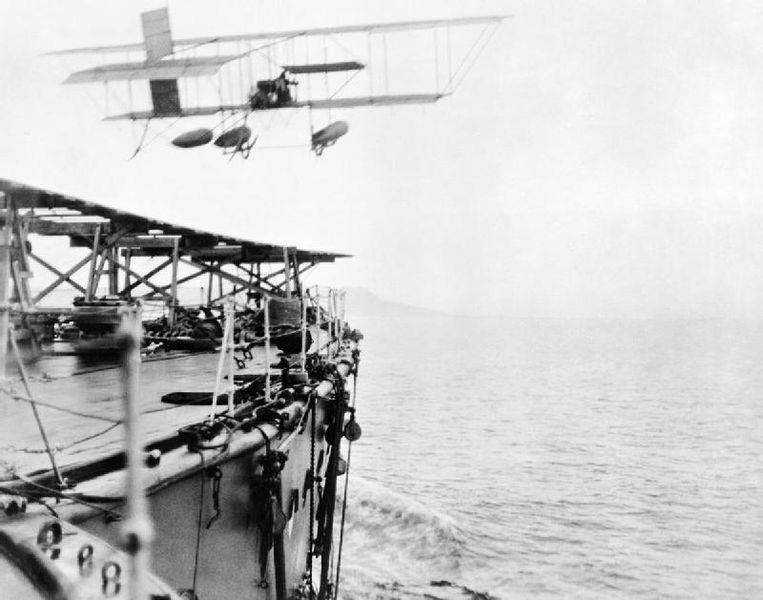 Aviation was brand new in 1914 and already France and Russia aligned no less than 400 planes in operatioal uniits submitted to the Army. The latter, reflecting a constant struggle for independence mirrored the initial reconnaissance duties of the air corps. Aviation had many years to rise, from a bunch of sportsmen and crafty daring-do to something considered with enough seriousness to be tested and eventually adopted by the Army, its main advantage being to replace ballons for observation. From the 1903 Wright brother’s flight at Kitty Hawk, aviation already tested war operations in several occasions before the war, notably in the Balkans and far east. The first even bombing missions started during the Italo-Turkish war of 1912.

Now, if the Army detained an organic aviation corps in all belligerents:
-On the entente side, France, UK, Russia, Japan and in 1915 Italy
-Germany, Austria-Hungary and Turkey for the central Empires

The Navy had none, or a very embryonic one. Since Eugene Ely demonstrated in 1910-11 one can take off or land on a warship, decicated naval aviation corps were few to be developed. In France, there was already such corps in 1912, with even a seaplane carrier, and in Great Britain, the RNAS or Royal Naval Air Service was established on 1 July 1914 (after the Royal Flying Corps, on 13 April 1912). On paper it existed in Russia in 1913 but really was established in 1915 and 1916 for Austria-Hungary. 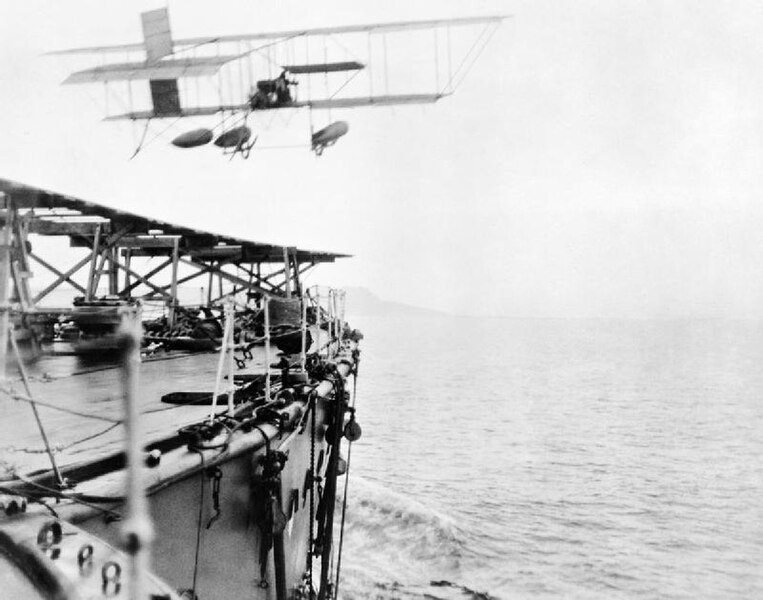 Commander C. Samson of the RNAS takes off from HMS Hibernia in his modified Shorts S.38 “hydro-aeroplane”, first British pilot to take off from a ship underway at sea.

There was also a small naval air corps belonging to the USN since 1910, but it’s really from 1917 and the US entry into the war that it grew to much larger levels. Meanwhile, Japan operated a single model, the Yokosho Rogou Kougata, playing its part during the siege of Tsingtao. Germany did not lacked manufacturers and had expertise on floatplanes early on, and the Kaiserliche Marine integrated a flying corps, the Marine-Fliegerabteilung, combining airships and fixed wings aircraft.

-The long range, large airships, with Zeppeling at the world’s lead
-Land-based Fighters for coastal defence
-Medium land-based bombers for coastal patrol
-Floatplane fighters; adapted from land-based models
-Seaplanes (or flying boats) with amphibious fuselages for patrols and as fighters

Since it’s relatively easy to exchange a wheeltrain for floats, most land-based models on paper (and in practice) equipped naval aviation corps, coming from the same manufacturers as for the regular air corps. But building seaplanes was a dedicated skill and some manufacturers specialized in it. Those below starred are not “pure players”. We can cite here:

** The latter exclusively worked for the Navy, with Curtiss coming close second although it became the Army dear in the interwar.

Tactics of seaplanes/floatplanes in WWI

It was mostly the result of the geopolitical particulars of the great war. The western front froze itself in September 1914, resulting in a gruelling static trench warfare. At sea, the only sizeable central empires fleet was German. It was still away, but almost on par with the Royal Navy, ahead of the French and US or Japanese fleets. In 1915 with the added weight of the Regia Marina, the smaller Austro-Hungarian Navy was “trapped” in Pola, Adriatic, while the obsolete Ottoman Navy, althought reinforced by the Breslau/Goeben, was challenged by the Russian black sea fleet.

Once Von Spee’s far eastern squadron, chased from its Asian/Pacific bases by the combined might of the Japanese and British Navies, was dealt for in the Falklands, and its scattered remains found and sunk in turn (Emden, Königsberg and others), the Kaiserliches Marine was reduced to its main combat fleet, the Hochseeflotte. After Jutland in June 1916, it was almost inactive until the end of the war.

Instead, Germany focused its attention of the new promising submersible. And thus, it’s really the 1917-18 phase of the battle of the Atlantic, with more troopships and vital cargoes crossing to the old world, that submarine warfare, counting more U-Boats than ever at sea, became the greatest naval threat. It was to motivate the most radical increase in the entente naval corps. It was soon realized that:
1-Planes were quite able to see submerged submersibles, or detect them surfaced by clear weather at much larger distances than surface ships, still devoid of sonar and radars at the time.
2-Floatplanes could “land” anywhere contrary to land-based ones and thus were more qualified for the role
3-Planes could radio their findings but also attack by themselves with cannons and bombs in some cases.

And thus, from coastal defence and patrol, directed as enemy vessels, tactics changed on the entente side to ASW patrol, mostly in the Atlantic, but also the Mediterranean, with the Black sea good third. If long range multi-engine heavy bombers of 1917-18 could have been used, they were reserved for an early form of strategic bombing for the Army. One considerable asset however for the central Empires were their airships, 118 built by Zeppelin before and during the war.

The question of strategic bombing

With their long range, they could constantly watch over the north sea when working for the Kaiserliches Marine, the others being employed for “strategic” solo bombing missions notably over London and Paris. The Royal Navy even installed long range guns to deal with them, dedicated fighter squadrons with incendiary bullets and rockets also, and there were indeed a few duels between cruisers and Zeppelins. On paper an airship was much faster (85 kph at best compared to 28 knots/51 kph for a light cruiser) and could carry four tonnes of bombs. But the admiralty never tried to bomb a ship, a shame because at the time, deck protection was minimal, if existing at all. It could have been possible for a fleet of Zeppelin to bomb the Grand Fleet in Scapa Flow. In 1917, the “blitz” started, with the Luftstreitkräfte launching dozens of Gotha bombers in formation over London. Ouitside the RFC, already engaged in France, local units of the RNAS took part in the interception. In fact Germany had a taste of its own medecine when not only the RFC started its own strategic bombing campaign in 1918 in retaliation, but also the Royal Navy launched a raid on the Tondern Zeppelin facility in 1918, trying to destroy Zeppelin sheds, while using for the first time the aircraft carrier HMS Furious in a dangerous sortie close to the German shore. Before that, the Sopwith aboard participated in daily patrols to find and destroy Zeppelins.

The development of seaplane carriers The very first tactical approach of planes was only related to their combined use with artillery. However as the war progressed, they were soon pushed into new roles, which created branches -and tactics- of their own. The Fighters are a good example of this. They emerged of necessity, when aviation met intelligence gathering in an industrial scale.

On the ground, spies were shot, but the first aviators, even from opposite sides, gently waved their hands in salute when meeting in the air. Of course this “chivalry” image persisted in culture, but the grim reality soon take over when when a pilot first shot another with a pistol.

They were attempts, with grenades, lead balls, hooks, cavalry rifles, until the most deadly weapon of the war made its way in turn, amidst the canvas and ropes of the first improvized fighters. The first MG-armed serie fighters were the Fokker Eindecker E-I which advantageously replaced the prolific bird-like Erich Taube, way too frail for a machine-gun. From then on, the plane itself, thanks to the interrupter gear, could be aimed by the pilot on its target. And the first fighter tactics were born.

Max Immelman (which gave its name to a distinctive loop) was among the first to devise air-to-air combat tactics. The Germans pilots of the Luftstreitkrafte in general were the first to codify these tactics, especially Oswald Boelcke, his own great rival. The latter indeed would be considered as the Father of Air Fighting Tactic, and wrote the famous “Boelcke’s Dicta”, still bedside book for pilots at the eve of the Spanish Civil War (More on this below, see “aces”).

With his Jasta 2 in 1916, Boelke had his men practising strict formations, repeating tactical drills. One of his most avid students were Manfred von Richthofen and Erwin Böhme. At the time of the second “Fokker scourge” in April 1917, German pilots were the best in the world, making for inferior numbers.

From the Wright Brothers’s “Flyer”, a frail contraption of twisted wood, ropes and canvas, using a pusher configuration and canard, planed went to the late WW1 models, either superfast, well-profiled and powerful fighter capable of 250 kph, sturdy all-duty two-seaters, or heavy four engine bombers. The hart of the plane was, as today, its engine. In 1903 Taylor built a light four-cylinder for the Wright’s brother plane. In 1906 Levavasseur built a streamlined water-cooled V8 engine. But most importantly in 1908 Seguin’s Gnome Omega, became the world’s first rotary engine, mass-built until the end of the war and used by all. This was the ancestor of fixed star-shaped engines (or radial). There would be a long and protracted “battle” between the supporters of the air-cooled radial and watercooled inline engines. Both had their advantages and drawbacks, and both were maintained in production until the coming of the jet. In this era of daring pioneers however, even more radical solutions were studied. The first ramjet engine was patented as early as 1908, first Coandă ducted fan aircraft in 1910, first Rateau turbocharger in 1914 (perfected by Moss in 1918 and later built in serie by Armstrong Siddeley as the Jaguar IV).

Rotary engines has been the mainstay of propulsion in WW1, alongside inline engines. By quantity the first easily outmatched the second. They were more compact, easy to manufacture and maintain. But they also provoked a high drag. The inline engine however was compact in another way: The inline cylinders made for a much more reduced cut, and helped to create streamline fuselages with more reduced drag, and ultimately better speeds. Much costlier and requiring more maintenance and technical skills they were mostly used by the Germans. One important characteristic was inline engines were immobile, while the rotary ones, as their name suggest, turned at the very same rate as the propeller. This cause excessive fatigue and some gyration problems that made some flight characteristics tricky for untrained pilots (which was often the case). But in the end, and giving the life expectancy of planes and pilots on the Western front, the main concern became production.

The saga of WW1 seaplane & floatplanes