The Kolberg class is a class of light cruisers built for the Kaiserliche Marine shortly before the early 1910s. Four ships, SMS Kolberg, Mainz, Cöln, and Augsburg, were designed by the shipyards Schichau-Werke, AG Vulcan, Germaniawerft and Kaiserliche Werft from the cities of Danzig, Stettin and Kiel.

The ships had a waterline length of 130 meters and an overall length of 130.50 meters, a beam of 14 meters and a draft of 5.45 meters at the bow and 5.73 meters at the stern. They displaced 4,362 tons at nominal load and 4,882 to 4,915 tons at full load.
Their hulls were constructed with longitudinal steel frames. The hulls have been divided into thirteen watertight compartments and incorporate a double bottom, extending 50% of the length of the keel. Considered excellent cruisers holding the sea well, they had a large turning radius. Steering was controlled by a single rudder. Their transverse metacentric height was 0.83 m.
The crew consisted of 18 officers and 349 crewmen. They embarked on several smaller vessels, including a picket ship, a barge, a cutter, two yawls and two dinghy.

Ordered under the contract name “Ersatz Greif”, the Kolberg was laid down on January 15, 1908 at the Schichau-Werke shipyard in Danzig, under the hull number 814. She was launched on November 14, 1908 and then commissioned in the Hochseeflotte on June 21, 1910. Its construction will have cost 8,181,000 marks. The cruiser was in drydock at the Kaiserliche Werft yard in Kiel between 1916 and 1917.

Ordered under the contract name “Ersatz Jagd”, the Mainz was laid down in September 1907 at the AG Vulcan shipyard in Stettin, under the hull number 288. It was launched on January 23, 1909 and then commissioned in the Hochseeflotte October 1, 19096. Its construction will have cost 8,777,000 marks.

Ordered under the contract name “Ersatz Schwalbe”, the Cöln was laid down in 1908 at the Germaniawerft shipyard in Kiel, under the hull number 191. She was launched on June 5, 1909 and then commissioned into the Hochseeflotte on June 16 June 1911. Its construction cost 8,356,000 marks.

The Kolberg witnessed several face-to-face encounters with the British during the war, including the raid on Scarborough, Hartlepool and Whitby in December 1914 and the Battle of Dogger Bank the following month. It also faced the Russians twice9, during the Battle of the Gulf of Riga in August 1915 and during Operation Albion in November 191710. After the end of the war, it was ceded to France as a war prize and renamed Colmar . She served briefly in the French Navy, including a deployment to Asia in 192411. The Colmar was withdrawn from service in 1927 and scrapped two years later.

After commissioning, Mainz served with the II Scouting Group, part of the reconnaissance forces of the Hochseeflotte13. She was assigned to patrols off Heligoland Bay at the outbreak of World War I in early August 191414. In late August 1914 she fought in the First Battle of Heligoland in which she was sunk by British cruisers and destroyers on the morning of 28 August15.16. The British rescued 348 crew before the ship rolled over and sank. Eighty-nine men were killed in the battle, including its commander.

After commissioning, Cöln served with the II Scouting Group, part of the reconnaissance forces of the Hochseeflotte. She was assigned to patrols off Heligoland Bay at the outbreak of World War I in early August 1914. In late August 1914 she fought in the First Battle of Heligoland in which she was sunk by British cruisers and destroyers on the morning of 28 August. The crew abandoned ship, but German forces did not search the area for three days; only one man was found alive.

At the beginning of her career, Augsburg served as a torpedo test ship, then as a gunnery training ship. After the outbreak of the First World War, he was assigned to the Baltic Sea, where she spent the entire duration of the war. On August 2, 1914, he took part in an operation during which the first shots of the war were fired against the Russians. It then took part in the Battle of the Gulf of Riga20 in August 1915 and Operation Albion in October 1917, as well as many smaller engagements throughout the war. In January 1915, it hit a mine and was inoperative for many months. After the end of the war, she was ceded to Japan as spoils of war and renamed simply as Y. The cruiser was scrapped in 1921. 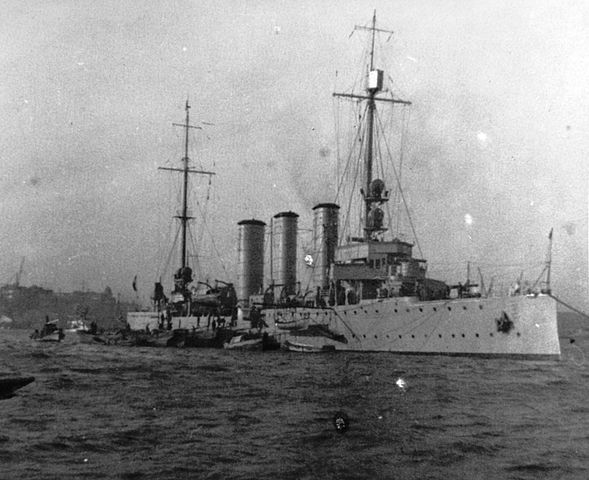 SMS Kolberg was stricken on 5 November 1919 and handed to the French in Cherbourg on 28 April 1920 as “W”. She was recommissioned as Colmar in 1922, her original 8.8 cm guns replaced by 75 mm ones. A new aft deckhouse was built and an extra 75 mm gun installed on its roof. Her sea trials lasted until late 1922, and she was sent for colonial service in French Indochina, departed in June and arriving on 7 September 1922. She replaced Montcalm as flagship of the Naval Division of the Far East and was sent in Vladivostok in 1923 after the Great Kantō earthquake, proceeding to Yokohama to assist in the relief effort with Jules Michelet, Victor Hugo, and Jules Ferry. In 1924, Colmar and Jules Ferry also landed troops to protect western interests during the violence in Shanghai. Colmar was back in France in February 1925 and lasted in service a few more months, until decommissioned in November. She was cannibalized until 1927, for the other ex-German cruisers until and stricken on 21 July 1927, sold for BU. See also about Colmar/Kolberg.