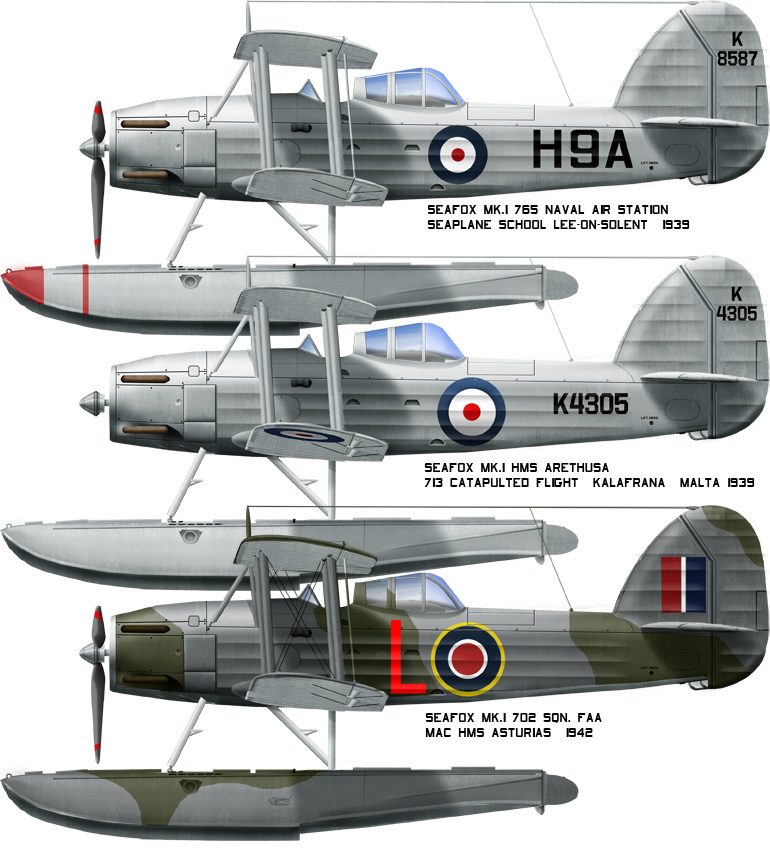 The Fairey Seafox was designed and built by Fairey Aviation to be catapulted from light cruisers. It entered service in 1937 and stayed active until 1943 with just 66 produced, in service with 11 naval air squadrons. This biplane was powered as pet an admiralty request by the air-cooled Napier Rapier H engine, and was used both for observation and artillery spotting. Among others it played an important role during the battle of Rio de la Plata between Sturdee’s cruisers and KMS Grav Von Spee and from HMS Emerald, Neptune, Orion, Ajax, Arethusa and Penelope, plus the MACs HMS Pretoria Castle, Asturias and Alcantara.

In response to the terms a Specification Air Ministry Specification S.I 1/32 for the Royal Navy (the latter did not have the right to publish such specs for aircraft) about a catapult-launched model from battleships at first, later to Cruisers. Fairey applied for the specification and presented a two-seat biplane floatplane, based on previous designs.
The pilot was placed in an open cockpit behind a windshield, however the observer-gunner, open in the first prototype, was in a rear enclosed cockpit on the second, which was a novelty, adopted for production.
The underbelly was modified and reinforced to ensure proper launching from a catapult and the upper wings received additional bracing for lifting the plane back up with a cargo crane. The monocoque fuselage was all metal, while the wings were covered with canvas.
The model first flew on 27 May 1936 but based on the design already in January 1936, Fairey was awarded the contract, at first for 49 aircraft named “Seafox”.
The first prototype flew in Hamble in May 1936 and showed already issues with this engine. The second prototype, with the enclose rear coskpit also had a wheeled undercarriage, and took off on November 5, 1936, but was converted into a floatplane afterwards. By September 1936 the order was extended to 15 more aircraft for a total of 66. The 64 were produced quickly, with the first out in 1937, first entering service with the 700 Naval Air Squadron of the Fleet Air Arm, making 66 with the two prototypes. The model was not considered very successful and no further evolution was done.

The fuselage was of all-metal monocoque construction. The aft part was made of metal longerons covered by fabric, with a metal back. The wings were made of metal spars and ribs covered with fabric, whereas this was full metal on the leading edge. The wings were attached between themselves with two sets of “H” struts each, plus the usual ailerons struts. They were attached to the fuselage with two “V” struts and two poles. The floats were attached to the wings and fuselage by two sets of “W” type struts. The wings had a light dihedral and were symmetrical top to bottom. Both them and the tailwings were of a relatively squarish, straight design.

The Seafox was not an offensive model and given its weak engine, could only carrying defensive armament, and exceptionally some extra payload under the wings:
For Machine-guns it had a single 0.303 in (7.7 mm) Vickers light machine gun on a flexible mount for the observer.
For Bombs: It carried two under-wing racks, each able to carry a single 100 lb (45 kg) bomb, and eight × 20 lb (9.1 kg) incendiary bombs.

Production Seafox started to roll off the assembly line in 1937 with deliveries starting from 23 April (K8569 à K8617 et L4519 à L4533). Deliveries stopped with the last delivered in 1938 (unknown date). Catapult tests were carried out by the British Aviation Research Institute, and at sea from HMS Neptune in the Strait of Gibraltar.

Also on the light cruisers of the Arethusa class, Arethusa and Penelope, the Leander class HMS Ajax, and the older Emerald.
Catapult Flight maintained one or two planes on board in the 3rd cruiser squadron of the Mediterranean and the 9th cruiser squadron and South American Division (South Atlantic Command).
At the start of the conflict, 32 Seafox were at sea with the Royal Navy, Royal Australian Navy and New Zealand Division of the Royal Navy. Seafoxes were not only used by Fleet Air Arm, but the RAN and RNZN, and only these. However some sources report them used by Belgium and Peru, but it is likely some confusion with the Fairey Fox. British seafoxes were kept when ships were transferred, or in Royal Australian Navy Service such as H.M.A.S. Perth, H.M.A.S. Sydney and H.M.A.S. Hobart since the start.

KMS Graf Spee
Soon, it played a in the battle of the Rio de la Plata in December 1939, spotting the German pocket battleship Admiral Graf Spee (Deutschland class) after some scouting and hlping British naval gunners to score many hits. Captain Hans Wilhelm Langsdorff even noted the inability of his AA tpo deal with them during the battle against HMS Exeter, Ajax and Achilles.
Two Seafox were carried, one for HMS Ajax and one for HMS Achilles. Their first use in that pre-radar time, was to search for, and ultimately locate the German pocket battleship Graf Spee which was causing mayhem in the South Atlantic as commerce raider.

The German ship was reported in the estuary of the Rio de Plata river and on December 13, 1939 a fierce fight of several hours followed, during which the two Seafixes remained in the air as long as they could for artillery spotting, ensuring all three cruisers had the upper hand despite all odds. The best cruiser was HMS Exeter with six 8-in guns, versus six 280 mm guns for the Graf Spee. The two light cruisers were armed each with eight 6-in but had to close, which was dangerous in such good weather and calm sea, a textbook naval gunnery setting.

Damaged, Graf Spee was forced to enter Montevideo, Uruguay. And Ajax went on catapulting its Seafox for photo reconnaissance above the Uruguayan arsenal. The observer carried a small camera and the pilot was at low altitude but was forced to face fire from the local AA, neutrality obliged. The Seafox returned with holes of Uruguayan steel. However with the eagerness of the Allied diplomats, KMS Graf Spee was forced to leave on December 17, and famously scuttled at sea, her bruning wrecked being shot by a Seafox from HMS Cumberland, arrived a few hours earlier. Lieutenant Lewin, who spotted the Graf Spee in the first place became the first Fleet Air Arm officer to receive the Victorian Cross in his lifetime. His carrer went on with the Fairey Barracuda.

These seaplanes were withdrawn after 1942, some retained for pilot training until withdrawal in turn from July 1943, but the very last in July 1945. They were gradually replaced by the Vought Kingfisher, a great improvement all around. Most of the pilots and observers of Seafox therefore joined the Kingfisher except for some crews of Squadron 753 who subsequently flew on Swordfish. Some Seafoxes of 716 Squadron remained in service until February 1944 for the surveillance of British port installations in the Irish Sea. It was one of these that spotted a U-boat off Liverpool in November 1943, chased by two FAA Avengers and sank after three hours. 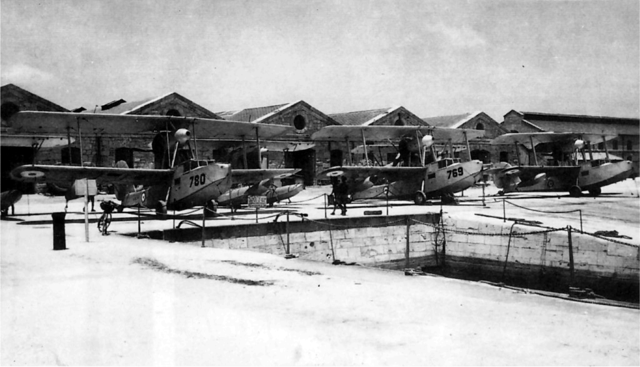 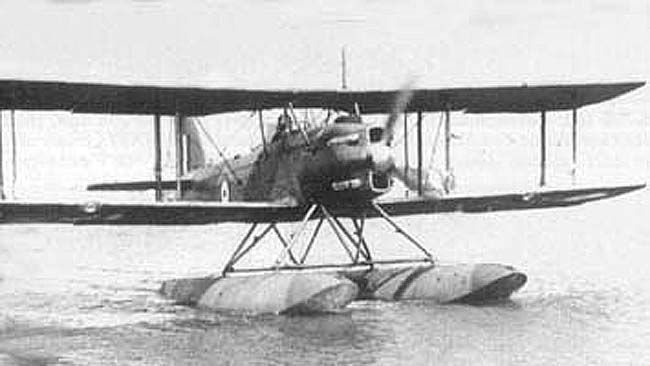 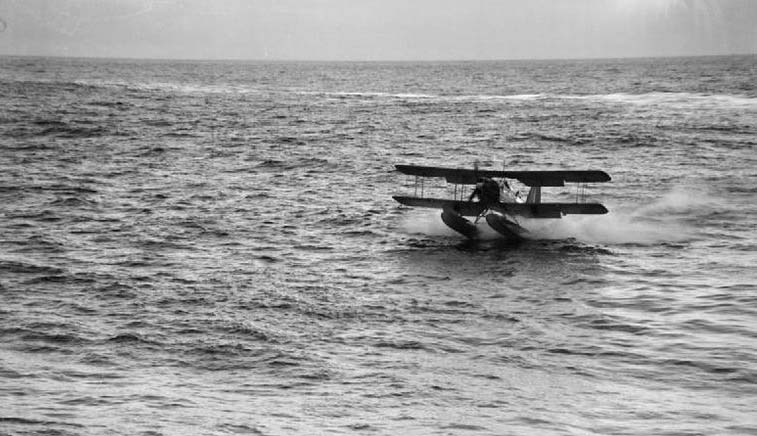 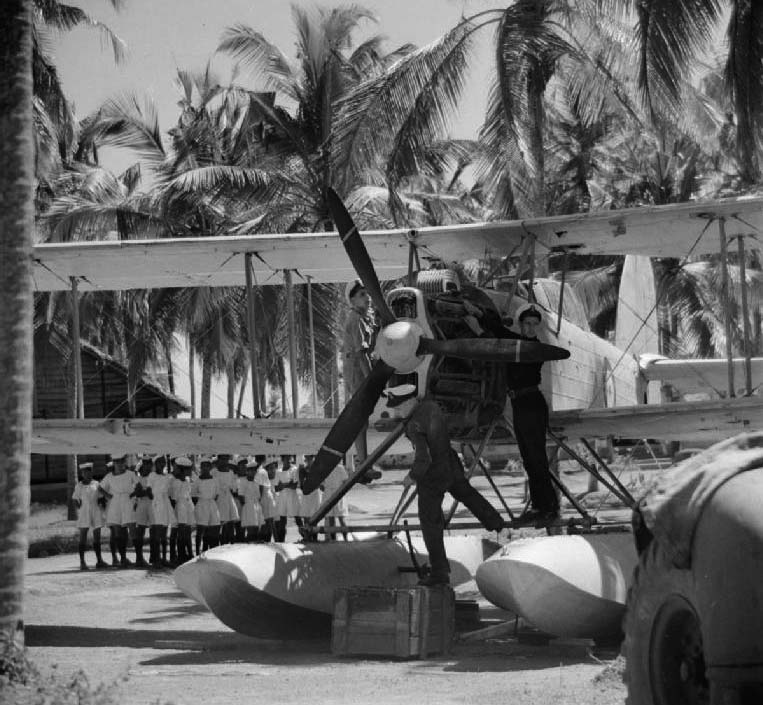