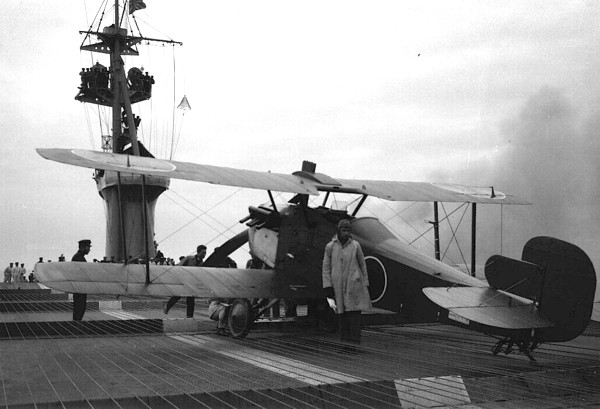 The long road towards the first IJN fighter

The Imperial Japanese seaplanes from the Wakamiya in 1914 were used operationally during the siege of the German colony of Tsing Tao. However no needs emerged for a fighter before 1916, when it was obvious the newly created Imperial Japanese Army Air Service (1912) subordonated under the Ministry of the Army Inspectorate General of Aviation was not to gently share its own with the Navy. During the same siege, the Army deployed its Provisional Air Corps, four Maurice Farman MF.7 biplanes and a single Nieuport VI-M monoplane. They flew 86 sorties between them, but this was the only valid operational use of WW1. Interest for aviation however grew from the lobbying of returning Japanese military observers from Western Europe: They saw all matter of aircraft in action, the indsutries, training, and their role over the battlefield.

Soon after the end of the war, the entente power had large stocks of surplus planes, which were available at low price: Japan purchased large numbers of these, notably including Sopwith 1½ Strutters, Nieuport 24s, and Spads. At the same time, a French military mission was invited to Japan to help develop aviation. Salmson 2A2, Nieuport, Spad XIII, two Breguet XIV, were purchased and operated by the army, and soon deployed in combat roles during the 1920 Siberian Intervention against the Bolshevik Red Army near Vladivostok. Nakajima Aircraft Company, founded in 1916, started to produce Nieuport 24 and NiD 29 C.1 (renamed Nakajima Ko-4). Its only by may 1925 that the Imperial Japanese Army Air Corps was established.

The Imported Gloster Sparrowhawk. 40 were assembled by Yokosuka, also a provider of the Navy.

Meanwhile, the The Imperial Japanese Navy Air Service (大日本帝國海軍航空隊, Dai-Nippon Teikoku Kaigun Kōkū-tai) established in 1912 stuck to its seaplanes, since the Army kept the bulk of land planes. In 1916, the Commission on Naval Aeronautical Research was disbanded. Funds were reallocated to three naval air units (hikotai) under the authority of the Naval Affairs Bureau (Navy Ministry). While the Army was courted by the French for their air force, for historica reasons the Navy naturally choose the British, notably the still valid prewar Anglo-Japanese alliance: They sent a representative in 1920 to observe air operations off the decks of HMS Furious.

At home already, construction started of the IJN Hosho, first tailor-designed aircraft carrier in Japan and the race was on the complete her before HMS Hermes. Soon, the Semphill mission followed, a British Officer was sent in Japan to train pilots and setup the first squadrons. The mission brought to Kasumigaura a hundred aircraft (twenty models) for testings, the bulk of the fighters being the latest on offer, the Gloster Sparrowhawk. And it was not only pilots. Technicians also became familiar with the newest aerial weapons and equipment of the time, plus looking carefuly at all models imported. The Semphill mission also brought plans of the HMS Argus and HMS Hermes, which inflexed the final plans of the Hōshō.

But still, if Nakajima was providing the Army, the Navy did not have its own manufacturer yet. The Hōshō, started December 1919 at Yokohama would need planes when completing, in 1921. This left barely a year and a half to Japanese manufacturers to camme out wit a product -or purchase British planes, possibly in knock-down kits for assembly in Japan. For this, the Navy turned to its own “family”, the already powerful Zaibatsu, Mitsubishi Shipbuilding and Engineering Co Ltd. Mitsubishi soon setup the Mitsubishi Internal Combustion Engine Manufacturing Co Ltd in 1920 in Nagoya, which soon gained a contract from the IJA to produce three types of aircraft needed on the Hosho: A fighter, a torpedo bomber and a reconnaissance aircraft.

This post concerns the Fighter: Herbert Smith, from Sopwith, was hired and wet to Japan to assist the design of these aircraft. He brought with him his trusted associate, Jack Hyland and a team of six other British engineers. His fighter was soon presented and designated 1MF, a naval code of three letter to classify these which became mainstream (inspired by the USN). For the Naval ordnance it was known as the Navy Type 10 Carrier Fighter. It was a design of 1921, corresponding to the 10th year of the Taishō period. The 1MF first flew in October 1921. It was not the first Japanese fighter (It was the Ko-4), but the first naval fighter of Japan. It operated in reality after, rather than with the imported Gloster Sparrowhawk in 1921-24. 90 were in service, versus 148 Mitsubishi 1MF. They served until 1930 whereas the Sparrowhawk were retired two years earlier, a testiment to the durability of the first Mitsubishi design, which proved extremely reliable. The 1MF was a single-seat and single-bay biplane. For it was a biplane, it was given unequal-span wings. It was also of all-wooden construction, given the materials readily available in Japan. For the needs of an aircraft carrier it was of course “navalized” by the British Team, using the same recipe proven onboard HMS Furious: A claw-type arrestor gear, which was basically tailored for the British-style fore and aft arrestor cables onboard the Hosho. The wheeltrain was also reinforced for deck landings, as well as the struts fixations.

The 1MF was powered by a 224 kW (300 hp) Hispano-Suiza 8 engine under license as the Mitsubishi Hi engine. This explained while its fuselage was more streamlined and narrow unlike traditional Sopwith designs, using a radial engine. The Mitsubishi Hi was a V-8, water-cooled piston engine. It developed 224 kW (300 hp). What changed however was the radiator. Provisionally the first prototype had an automotive type radiator, with a honeycomb grille, which had an effect on the aerodynamic profile. It was changed from the production version 1MF3 for two staged Lamblin radiators under the nose allowing a profiling which greatly improved performances.

The power was transmitted to a classic 2-bladed fixed-pitch propeller (wooden). This was a sufficient Power to mass ratio, about 0.18 kW/kg (0.11 hp/lb). Performance wise, it was capable of reaching 213 km/h (132 mph, 115 kn) at sea level, and fly for 2½ hours, climb up to 7,000 m and climb half this height in around 10 minutes. This was almost as good as the Spad VII (218 kph), but less than the Sopwith Dragon (240 kph). Its agility however, was conform to Sopwith products, and excellent. Japanese Pilots (which could compare with many other models already) had only praises for it.

In conformity with the times, armament was limited to two 7,7 mm machine-guns likely the standard Vickers type also used on Sopwith planes, which streamlined the process. They used exactly the same cal.303 ammunitions. It is not known if small bombs were to have been attached under the wings; Nothing has been found on the matter. For this, the closely-related biplace Mitsubishi 2MR was developed: A reconnaissance and bombing plane, and the Mitsubishi B1M torpedo bomber. Mitsubishi became the sole provider of the Navy indeed, until Nakajima stepped in.

The 1MF1 in service

After successful flight testing, and three modified prototypes, the 1MF3 was accepted by the Japanese Navy as its standard fighter. In all, 138 were delivered by Mitsibishi and this production ended in 1928. The last were carrier trainers, and many extant machines were later retrofitted to this standard.

The Mitsubishi 1MF3 entered service as the aircraft carrier IJN Hosho was already in service since two years, from 28 February 1923. The 1MF replaced gradually the Gloster Sparrowhawk. One 1MF became the first aircraft to take-off and land on a Japanese aicraft carrier. It was performed by William Jordan, a member of Herbert Smith’s team. He earned 10.000 Yen and a month later was succeeded by Shunichi Kira, which became the first Japanese aviator to land on an aicraft carrier carrier.

In general, the Mitsubishi 1MF proved both tough and reliable, well suited for the task. In fact it was still the number one fighter aircraft when the new fleet carriers Akagi and Kaga entered service in 1927 and 1928. It still trained pilots in 1930 but was by that time replaced by the Nakajima A1N.

Pilots trained at first on land, trained to land on a strip the size of the carrier, and take off on short distances, before moving on the carrier, which by the way remained a training carrier for all its service and formed hundreds of future officer airmen and aces. Many squadron leaders and officers in WW2 started in the 1920s on the 1MF. Since Japan was not at war during this period 1923-1930, the Mitsubishi 1MF was never used operationally.

Legacy: The story of the 1MF did not end there. There was a loosely related 1MF9 “Taka”, two experimental carrier based fighter prototypes. It was proposed to replace the 1MF3 in 1927, but was rejected by the Navy. Later in 1933, there was another attempt with a modern cantilever monoplane, partly in metal and using stress skin techniques: It was called the Mitsubishi 1MF10 7-Shi. This ultimate member of the great “1MF” family was designed by no other than Jiro Horikoshi (The legendary A6M lead designer). It first flew on March 1933, supposed to replace the Nakajima A2N, but both prototypes were lost during testings. Many elements were however taken to develop the much better Mitsubishi A5M. This story is partly seen in Miyazaki’s “the wind rises” about Horikoshi.

1MF2, showing its parasol airframe, soon dropped for a return to biplane configuration

The final 1MF3A, improved on many points