In the 1980s, the PLA Navy ordered Hudong Shipyard in Shanghai, later Hudong-Zhonghua, to design a replacement for the Type 053K AA frigate. The new vessel would be based on the previous Type 053H2 frigate, and natural designation followed as H2G. Development Project 055 was the programme name. The Type 053H2G was slightly larger, and crucially, fitted with the new HQ-61B surface-to-air missiles (SAM). Tests of the later however proved soon disappointing, and the type was limited in production to four vessels only, still in service after modernizations.

The design bureau revised the plans with ended with a variant called the Type 053H3. It was an improved Type 053H2G fitted with the proven HQ-7 SAM. This was a Chinese-produced version of the French R330 Sea Crotale obtained back in the 1980s. Not many changes followed and in all, ten Frigates Type 053H3s were produced between 1996 and 2005. Sanming (pennant #524) at anchor, she has been laid down at Guangzhou presumably, launched in December 1998 and completed in December 2000 for the East Sea Fleet.

Upgraded construction
Hudong Shipyard was trusted for the construction of the improved Jiangwei II in 1996, laid down three years after the launch of the last Jiangwei-I class #542 Tongling frigate. Both classes only differed in size and arrangement, which allowed to speed up construction time and found commonality reducing costs overall, including supply, maintenance and training. They however have upgraded radar and fire control systems. Their SSN capability was boosted by two more missiles of the YJ-8II SSM types due to the adoption of quadruple instead of triple launchers, and an octuple HQ-7 SAM system, which was shorted range but more accurate. Despite improvements they still lack a more secure and modular vertical-launch system and the launchers stays vulnerable. The final design of the anti-ship Frigate displaced 2,250 tons standard for 2,393 tons fully loaded, a length of 112 m, beam of 12.4 m and draught of 4.3 m. They carried 168 men, including 30 officers.
The most obvious visual distinction between NATO Jiangwei I & II (H2G and H3) are the HQ-7 SAM instead of HQ-61B system, eight C-802 anti-ship missiles instead of six, and aft AAA mounts elevated. The Jiangwei II was only briefly equipped with HQ-61B SAM before replacement by the final HQ-7 during an upgrade. Some sources claims this upgraded version was called Type 057 in PLAN’s nomenclature.

The Type 053H3 displacement is 2,250 tons standard and 2,393 tons fully loaded, comparable to the H2G, with the same overall length of 112 m (367 ft 5 in), a beam of 12.4 m (40 ft 8 in) and a draught of 4.3 m (14 ft 1 in), the same as the H2G, at least officially. However the upper forward deck is lengthened in order to accommodate the new weapons system. Radars are also different, the superstructure is remodelled and the twin guns are replaced further aft and in high positions abaft the helicopter hangar.

Propulsion of the Type 053H3 Frigates: Armament of the Type 053H3 Frigates:

This was about the same as the H2G, with AA, SSN, and ASW capabilities making these ships versatile platforms despite their limited size. The great novelty of this design, but not new in the Chinese PLAN as already used on destroyers previously. This system was derived from the French R330 Sea Crotale. Originally the Crotale system was a joint effort for South Africa which searched for a short-range SAM. Developed by Rockwell International and Thomson-Houston/Mistral in France by 1967, the system was first named Cactus. Impressed, the French air force adopted it too, and soon it was widespread in all three services. Since 1978, the system has been improved gradually and is a staple for short-range AA defense in many navies, with 330 systems sold to 11 countries.

In China, one system was purchased on the 1980s and reverse engineered, creating the HQ-7. Gradually the system was improved and the current HQ-7A/FM-90 is used on the Type 053H3 and Type 054 frigates. The 054A used the longer range HQ-16, derived from the Russian “Buk” SAM. The basic HQ-7 used a Type 360S E/F-band Doppler radar capable of a detection range of 18.4 km. It was coupled with a ZJK-4 combat management system, capable of managing up to 30 targets, tracking 12 simultaneously. The improved FM-90 produced by CNPMIEC is faster and has a longer range, using an IR-tracking camera. Introduced in 1998 it is mainly proposed for export. Type 53H3 schematics – Note this is not the standard weapons system, but the refitted Huaihua

Electronics of the Type 053H3 Frigates:

Command and control architecture comprised the Chinese-built ZJK-2 combat data system. It was derived from the French TAVITAC imported in the late 1980s.
This system is in open architecture, with modular, multifunction consoles and for display large, HD colour flat screens. The C&C system compiles and displays tactical pictures and maritime picture (RMP) from sensors data. Its functions are threat evaluation, weapon allocation and engagement co-ordination of the armament against multiple targets at once.
This package comprised the following:

Six were sent to the East Sea Fleet. Huangpu Shipyard at Guangzhou in southern China delivered a single ship, 528 Mianyang. She was the last built for the PLAN, commissioned in April 2005 for the North sea fleet. 527 Luoyang and 564 Yichang also joined the North sea fleet. 565 Huludao was the sole Frigate sent in the south sea fleet.
Hudong shipyards would deliver three more Frigates of a modified type this time for Pakistan. They were intended to replace four US warships. The Purchase of four was deferred in 1995 due to economic and diplomatic problems (see later).

Modernization of the Type 053H3 Frigates

A mid-life upgrade was noted by foreign observers the class from 2015. The replacement of the ESM/EW suite/radars by systems driven from the Type 054 was the most visible change, followed by the HQ-7 launcher replaced by a HHQ-10 unit, short range missile. Also the twin Type 76A 37mm guns were replaced by more modern 30mm CIWS systems closely modelled after the Russian Gryazev-Shipunov AO-18K. Variants of the Type 053H3 Frigate The F-22P (for Pakistan) class frigates were the first export version of the Jiangwei-II Type 053H3 built for China. The contract was obtained after the Pakistani got rid of the old Garcia and Brooke-class ASW frigates in 1994.

Exports of the Type 053H3 Frigate

As the new 054 type frigates were introduced in PLAN, it was decided to sell the three earliest ships to Bangladesh. The ships concerned were the following:
#522 Lianyungang, renamed BNS Umar Farooq (F-16)
#521 Jiaxing as BNS Abu Ubaidah (F-19)
#523 Putian as BNS Khalid Bin Walid (F-20) The C28A (A stands for Algeria) was a frigate class successfully exported after the F22P model by China. The deal was signed in 2014. Three models are now in service, and they are closely based on the 053H3 type rather than the previous F22P. These missile frigate are the first Chinese military vessels to adopt the British Lloyd’s Register of Military Ships, using a series of new technologies: “low point” design with radar absorbing paint, stealthy shapes, no funnel stack replaced by diesels exhaust near the waterline fin stabilisers and bilge keels.
The class (all From Hudong in Shanghai) comprised since 2016 the #920 Adhafer, #921 El Fateh and #992 Ezzadjer. Construction between the order and commission took barely two years.

The C28A-class heavy corvettes were designed by the Marine Design and Research Institute, a branch of China State Shipbuilding Corp. In 2011, the Chinese proposition defeated 10 competitors from eight countries for the Algerian Navy contract. The first of these was delivered in September 2015 and the second in January 2016. 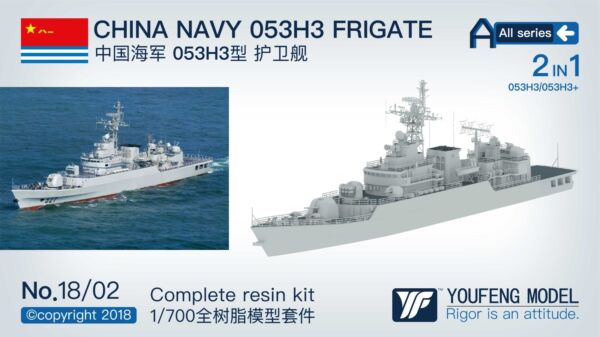