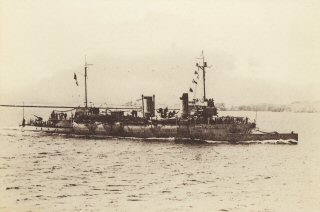 The Torpedo Cruiser was a development of the controversial Jeune École ("Young school") a strategic naval concept that argued that the large ironclad battleships then being built in Europe could be easily and cheaply defeated by small torpedo-armed warships. Most nations including UK would built some in the 1880-1890s but the concept proved ill-fated and most of these ships were used for other tasks in 1914. Dunois and La Hire, named after two famous knights who fought alongside with Joan of Arc, followed the class of d'Iberville, but differed in that they adopted reversed bridges in their design, bottom front and rear. They were lighter, but despite more power (hp 7500 against 5000), failed to exceed 22 knots. Wrongly classified as TB destroyers as being too slow, they were none the less neither really destroyers of cruisers, as they did not possessed Torpedo tubes.