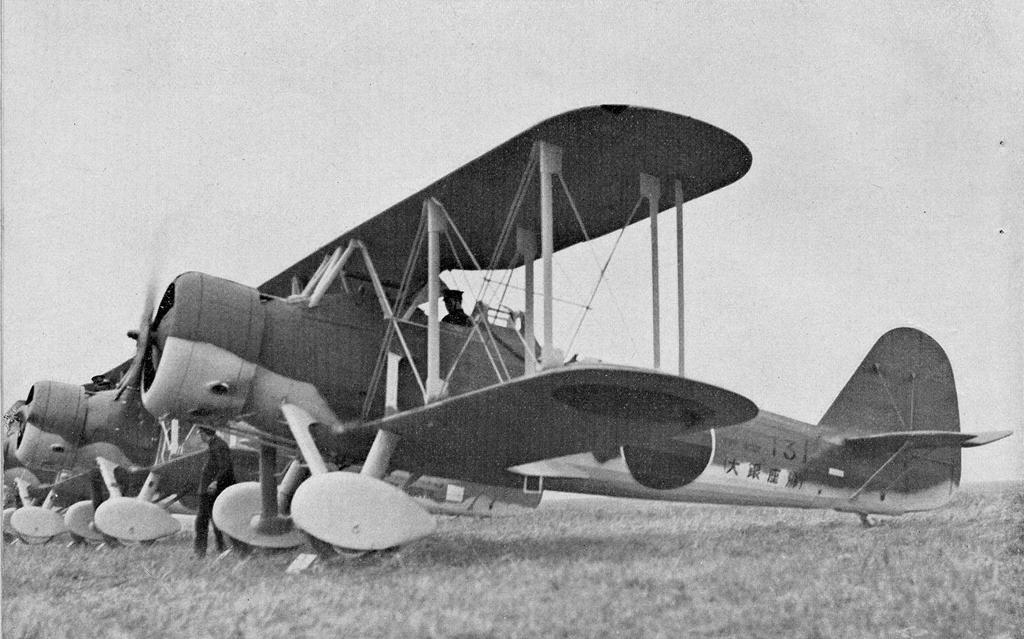 The Aichi D1A/D2A "Susie" was a reliable, modern dive bomber biplane in service with the IJN from 1935 to 1940 (1942 with Mandchukuo). It was the direct predecessor of the D3A "Val" monoplane of WW2 fame, and still served in many units in China while replaced in the fleet from 1940. Two models were developed, the D1A1 and D1A2, mostly used in China.

The first Aichi soon confounded with dive bombers, notaly its D3A "Val" for WW2 fame. The company Aichi Kōkūki Kabushiki Kaisha (愛知航空機株式会社) or Aichi Aircraft Co., Ltd, was founded in 1898 and started as a small crafts specialist, Watch and Electric Manufacturing Co., Ltd. It turned to aviation in 1920, and without expertise but only ambitions in this field, turned to the German manufacturer Heinkel in 1923, relying initially on heavy technical assistance from that company to eventually give birth to its first model, the Type H Carrier Fighter in 1926, a carrier-based floatplane fighter, and license-built Heinkel HD 23. In 1928 came its first bomber biplane, the 1928 AB-1. Soo also, the company started prospecting for Navy Contracts, and provided a vast sways of floatplanes and convertibles, notably the 1930 Aichi E8A, the floatplanes E12A and E13A, and its first dive bomber, the Aichi D1A and its derivative, the D2A, leading later to the excellent monoplane D3A. Alongside it also developed torpedo bombers like the WW2 B7A and B8A, or special service submarine-launched M6A Seiran. The company also developed aircraft engines, notably radials but also inline, like the Aichi Atsuta derived from the Daimler-Benz DB 601A inverted V12. The company was reorganized in civilian prduction, notably cars after 1945 and still exist today, now integrated into Nissan.

Development of the D1A

The D1A came out of the IJN need for an advanced carrier borne dive bomber. In 1932, Aichi answered such query from the Navy, with the AB-8 (internal designation related to biplanes), a carrier-based attack bomber prototype which competed -and lost- to the Kugisho B3Y. With rapid advances in aircraft technologies, Aichi not to be undone proposed a modified version of the AB-9 for the 1934 competition. Therefore the company prototype denominated AB-9 first flew that year, not designed by Aichi, but Ernst Heinkel Flugzeugwerke at the company request, searching for a more advanced model, partly in metal and with a superior speed and payload. 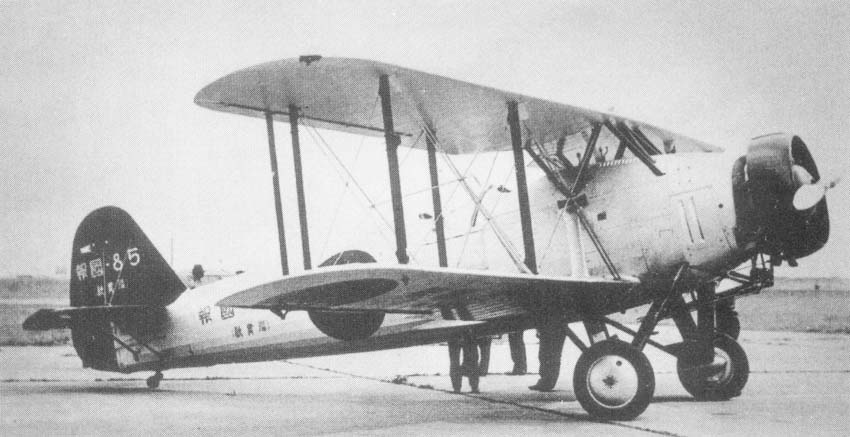 Heinkel found interest in this request as forbidden to develop military planes in Germany according to the treaty of Versailles, and sent specialists in Japan, with engineers, blueprints and even parts in order to create the prototype Aichi wanted to present. This version designed by Heinkel was the He 50 developed from 1931 so in secret, and which in Germany was used as a patrol floatplane instead of a landing gear model. The model was only built and introduced into service as a dive bomber after Hitler arrived in power, also exported to China and used by Spain during the civil war.

The specific Japanese prototype was the He 50b, third prototype also designated HE 66 for export to Japan, with three more completed for German evaluation. All were powered by the same 373 kW (600 hp) Bramo 322B radial. These led to the He 50A, main production version later replaced by the Stuka. Pragrmatic, Aichi immediately started copying in detail the He 66 which was finalized rapidly as the prototype.

It won the IJN competition and the latter ordered the finalisation of design, produced as the D1A1 under navy aviation ordnance designation (Last letter for Aichi, D for "dive bomber", first model). Production was geared up, still with German assistance the same year and deliveries started in 1935, after which the model started to replace older bombers in service on all service aircraft cariers of the time: Kaga, Akagi, Ryujo, and the completing Soryu. In all, Aichi would deliver 162 D1A and 428 of the improved D1A2 until 1938, when replaced by the new D3A monoplane.

The design of the D1A was based on the Heinkel He 66, a two-bay biplane constructed of metal with fabric covering. The braced tail unit was conventional, and landing gear of fixed tailskid type. It had a purposedly reinforced fixed landing gear, and conventional type tail landing skid. It was not at first equipped for carrier operations. The D1A was given initially a Siemens SAM-22B (Jupiter VI) radial engine and was somewhat underpowered. The production version D1A1 was given the 418kW Nakajima Kotobuki 2 Kai 1 radial engine. The D1A2 was given an even more powerful Mitsubishi engine. The Navy Type 94 Carrier Bomber Aichi D1A1 production version had its radial engine enclosed by a Townend ring, the introduction of slightly swept wings, replacement of the tailskid by a non-castoring tailwheel. Also in the 162 delivered, the last 44 were given the 433kW Kotobuki 3 engine.

The construction was a radical departure over previous Aichi models, all-metal framing with reinforced fabric covering which ensured greater strenght. The end result was a sturdy airplane, able to rought landing on a carrier (to some extent), and dive bombing, subjecting the structure to extreme stress. With a relatively bulky radial engine it was not going to achieve speed records but had a good endurance and agility. The great letdown was its lack of usability on carriers with non-folding wings and still a wheeltrain relatively weak as well as no tailhook on initial models.

Armament was limited to two fixed machine guns in the nose, of the standard Japanese 7.7 mm (.303 in) Type 92 machine guns with an interruptor gear mechanism. There was a thord one on a flexible mount aft, for defence. The payload carried was important in 1934, with a single 250 kg (551 lb) bomb under fuselage, and main purpose of the plane, and two 30 kg (66 lb) bombs under wings.

Without a proper structural integrity for a tail hook to perform hard carrier landings, the D2A was only tested on carriers before being versed in Imperial Japanese Army airfields. It was assigned at first to the Carriers IJN Akagi, Kaga and Ryujo only, in detail, the 12th, 13th, 14th and 15th Kokutais. It is reportdly also in service on Hiryu and Soryu until replacement by the D3A, likely in 1940. But it was not practical and gradually retired from the Kido Butai and sent to China.

It was tasked in China (caouflaged or painted khaki) to destroy numerous ground targets in Manchuria and seemed successful in this task. Their limited defensive capability imposed the use of fighters to repel Chinese attackers. After campaiging in the rest of China, the D2A was gradually retired and it ceased all activity in 1940 in first line, although the model was allegedly completely retired only in 1942. D1A1s however remained in use with training units in December 1941. About 70 D1A2s also were kept in second-line units in China, so allied intel had to find for them a classification codename which was 'Susie'. She was rarely encountered during the war, but perhaps by the "flying tigers" in 1941. In 1942, only those in service with Mandchukuo were still active. 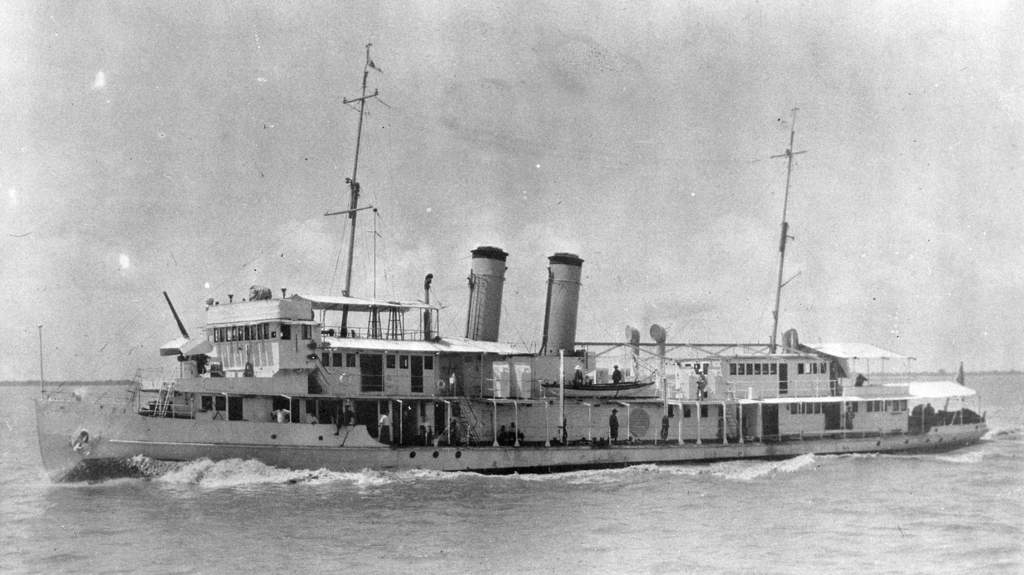 In 1937 D1As from Ryujo's were implicated with the USS Panay incident, which happened during the Japanese all-out attack on Shanghai and the Yangtse. 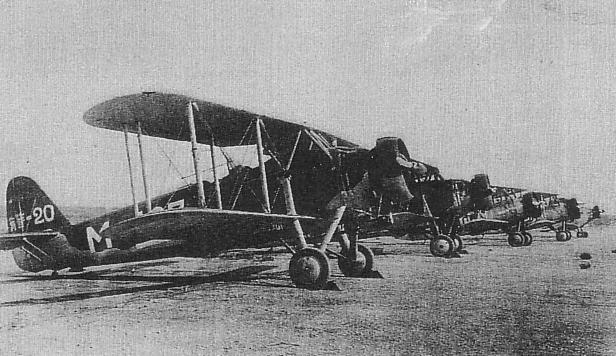 Already seen in the dedicated sub about Mandchukuo in WW2, the puppet country reprsented by Pu Yi, last Emperor of China but under Japanese supervision had a limited force (Manchukuo Imperial Navy Air Force) notably composed of two squadrons of Aichi D1A biplanes.

Aichi D1A1 based on land, Kyushu 1935 - built by public subscription. 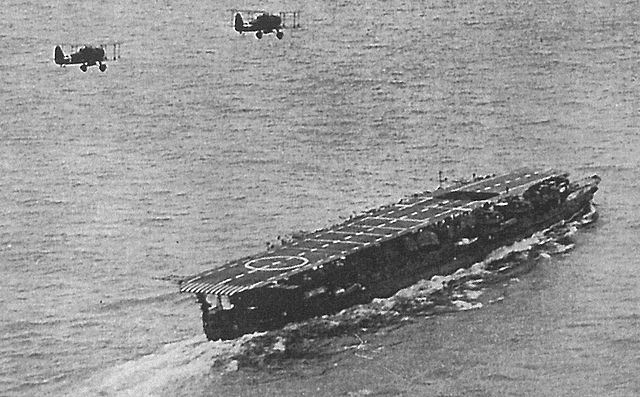 D1A2 in formation flight over China 1936, camouflaged in khaki 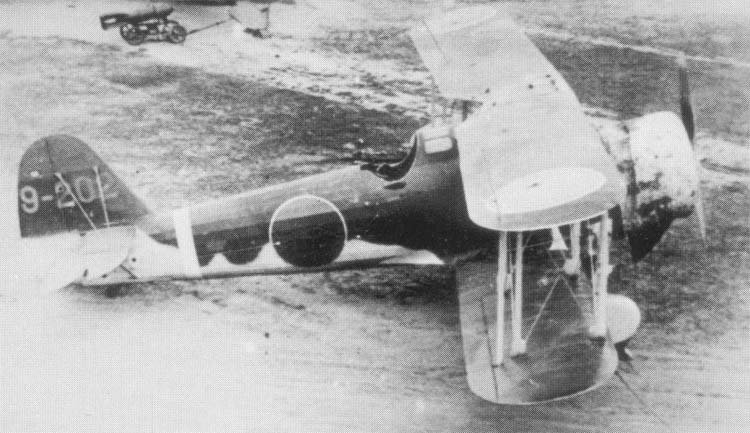 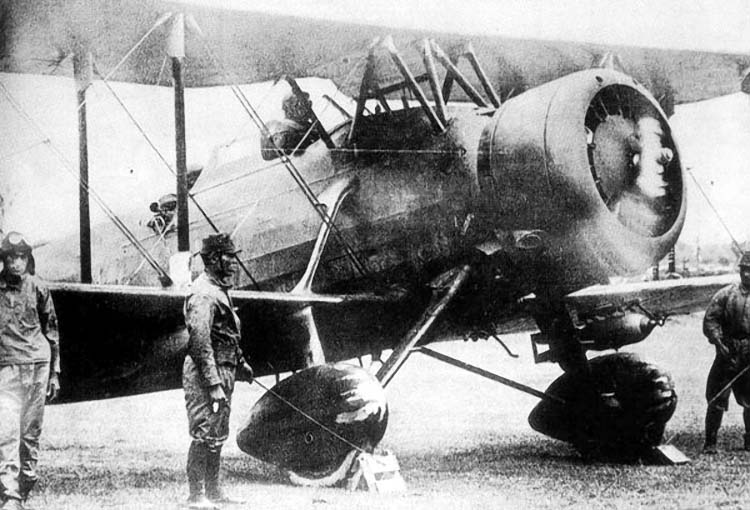 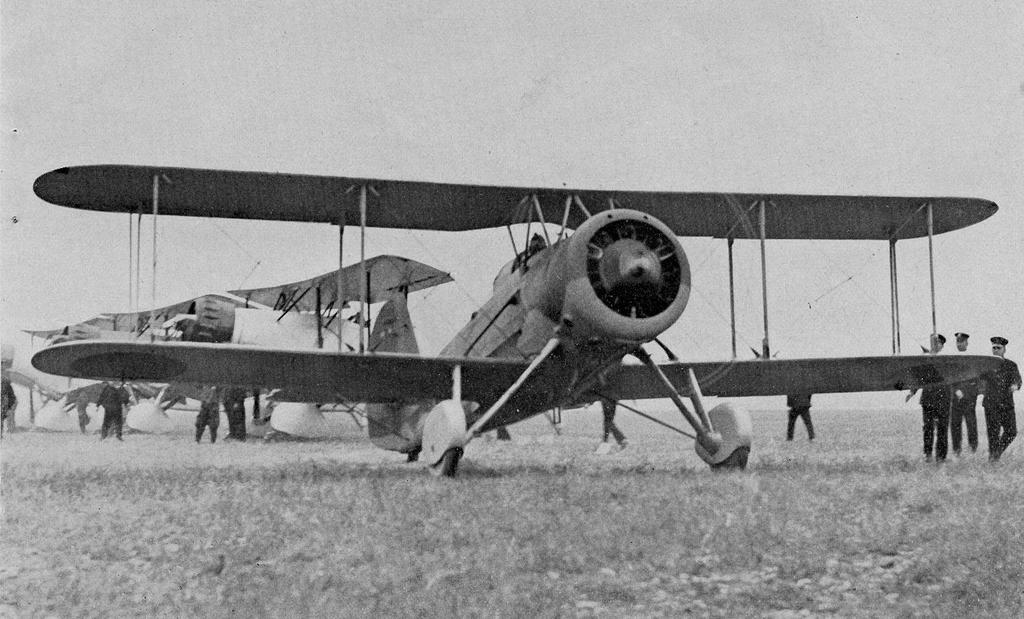 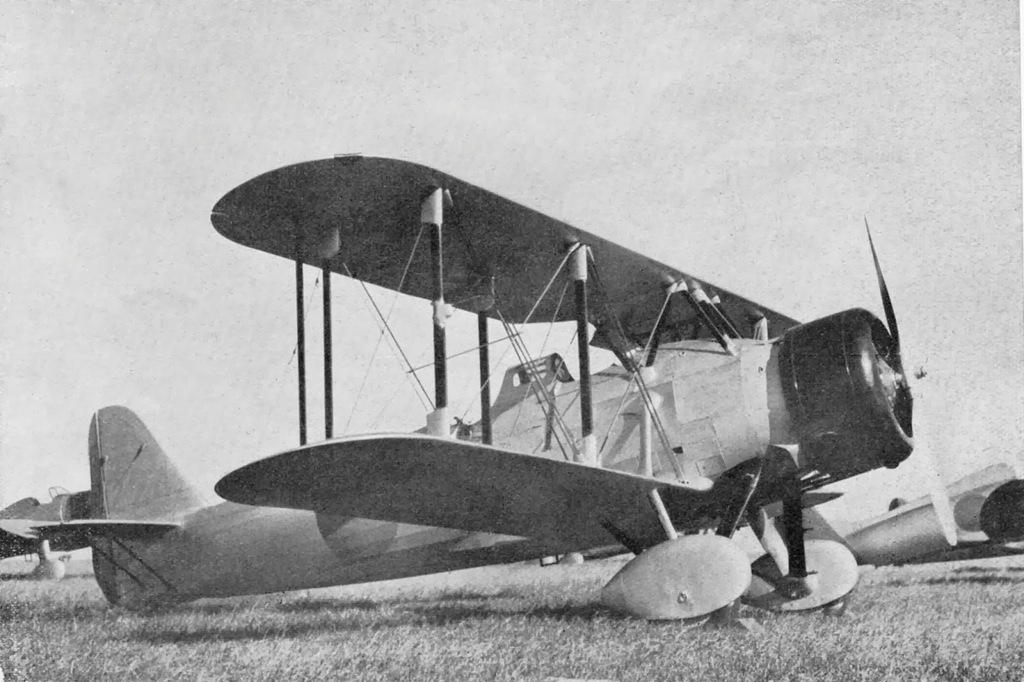 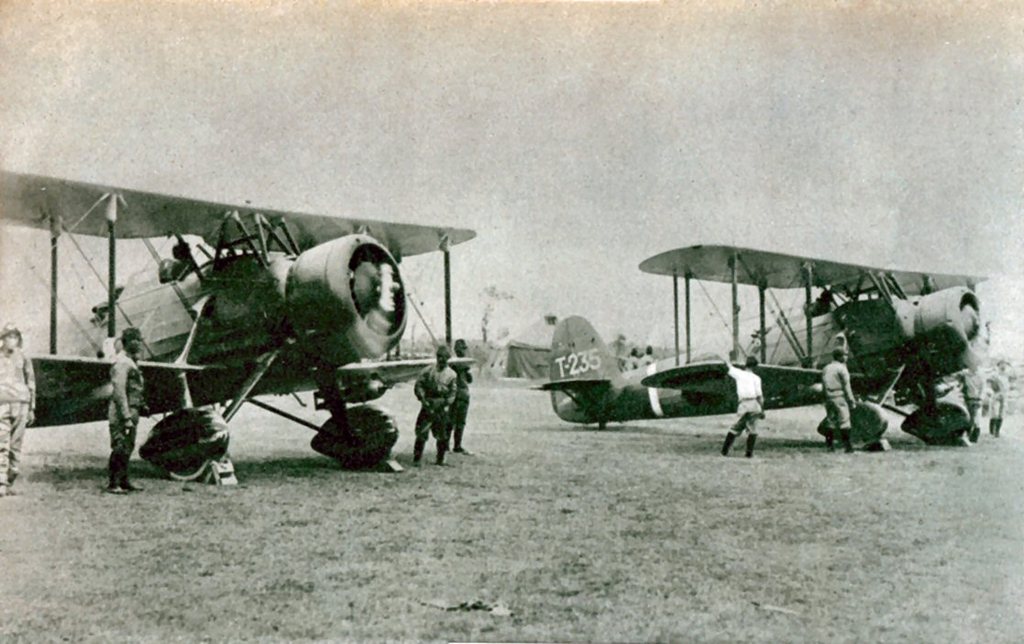