The last Italian pre-dreadnought battleships were by far the best, and even precursors of a new type of battleship, the Dreadnought. The minister of the navy in 1899, Giovanni Bettolo asked Vittorio Cuniberti, the chief shipbuilding engineer, to prepare the design of an 8000-ton armored cruiser uniformly armed with twelve 8 inches (203 mm) guns. His theory of a forcefully armed and fast ship went back a long way, and a naval battleship project gave him the opportunity to apply his principles. The latter was a fast battleship of 13,000 tons, faster than opposite battleships and more powerfully armed.

Cuniberti personally prepared also a more ambitious 17,000 tons design armed with twelve 12-in guns (305 mm), refused because seen as too ambitious by the minister. Cuniberti will make himself famous by publishing his famous "monocaliber battleship" design in the Jane's magazine in 1903, and received the special permission of the ministry to do so. This design was a game changer.

The Regina Elena was of the very last pre-dreadnought class of Italian battleships. They were of the last generation, often seen as transitional to the dreadnought to the point some authors coined the term recently of "semi-dreadnought". What make them stand apart ? The fact their secondary artillery was now almost as powerful as their main battery, and generally in turrets. A whole generation of these ships, often laid down before or in some case at the same time as the HMS Dreadnought: Italy's Elena, France's Danton, Great Britain's Nelson, Austro-Hungaria's Radetsky, Japan's Settsu, or even Germany's Blücher.

The fact the Italians laid down these battleships in 1901-1903, well before the Dreadnought was even approved, said a lot about its chief artisan: Vittorio Cuniberti pioneered the concept, but the idea was launched in 1899 by the new minister of the Navy, rear admiral Giovanni Bertolo. He ordered the new chief engineer of the navy, Cuniberti, to design a ship armed with twelve 8-in guns. The design therefore looked like an armored cruiser, not morroring the usual practice of a twin gun turret arrangement for the main arrtillery. The other specs were largely superior to a battleship anyway with a top speed of 22 knots while the armor was limited to 6-in, so cruiser grade. The genesis of the Regina Elena, which was to lead to the construction of four ships, to form a powerful squadron, was, therefore, a compromise between the first armoured cruiser project and the latest specifications of the Ministry: A ship capable to maintain 22 knots (41 km/h; 25 mph) thanks to 19-21,000 hp engine power, which was indeed superior to most pre-dreadnoughts.

On the other hand, if she remained indeed a pre-dreadnought by the choice of only two single turrets, housing 12 inches (305 mm) guns, whereas her secondary artillery was particularly powerful, composed of twelve 8 inches (203 mm) artillery pieces. This solution was common among last generation pre-dreadnoughts, so the Dreadnought design was the obvious next step.

The difference between the two calibers made it possible not to confuse the impact plumes, therefore, to adjust the range correctly, unlike British ships which opted for larger 234 mm pieces (Like the Nelson class) and could have some trouble identifying respective plumes. One may wonder, however, about the use of single turrets. This can be explained only as a measure of economy, of weight and budget. In fact, the prestigious "Proceedings" of the United States Naval Institute noted that "it should be borne in mind that a pair of guns in a turret do not make twice as good shooting as a single gun," and that given the limited displacement of the design, it "was the wisest choice that could be made." In addition these guns were served by reputed Barr and Stroud rangefinders.

For protection, these ships adopted an original protection for the magazine, that were refrigerated. Also, they were given an armor made of Krupp cemented steel manufactured in Terni. The main belt was 9.8 in (249 mm) thick down to 6 in and 4 in on ends. Decks were 1.5 in (38 mm) thick and the conning tower 10 in (254 mm) while the turrets and battery guns were protected by 8 in (203 mm) down to 6 in. This was not impressive, but speed was already seen as an active protection. Reaching up to 22.5 knots on trials, these ships, powered by classic VTE engines, were even faster than the Dreadnought and in general turbine battleships. They were almost seen as upgraded armored cruisers with an heavy armament and equally good protection. Their range was also good, of approximately 10,000 nautical miles (19,000 km; 12,000 mi) at 10 knots (19 km/h; 12 mph).

In general, these ships were applauded by the admirals of the world, at the time when the potential adversaries of Italy, allied with the central empires, were France and Great Britain. Cuniberti profoundly influenced Lord Fisher who pushed the admiralty to start the HMS Dreadnought, notably to avoid foreign navies do it first... So it was only because of a minister tight budget that UK, and not Italy, which industrial GDP was way below, authorized such ship first. Soon, Germany and the US will join this race, whereas Italy and France as well Austria-Hungary or Russia were already engaged in their last pre-dreadnought projects.

Career of the Regina Elena class

Four ships were laid down, Regina Elena and Roma in March 1901 and September 1903 at La Spezia, and the Vittorio Emmanuele and Napoli in September 1901 and October 1903 at Castellammare di Stabia. They were launched in 1904-1907, commissioned between September 1907 and December 1908. In 1912, forming the first line division, they participated in the Balkan war, pounding Rhodes and Tripoli and capturing the first. They formed the second division of the line in 1914, and were less active than the Italian dreadnoughts, although as fast. Shortly after entering service, their masts were removed and their funnels were shortened by a few meters. After a career without glory, they were deleted from the lists in 1923 for the first two, and 1926-27 for the last, the Roma being however disarmed and used as floating barracks and training ship at anchor until 1932.

Before the Italo-Turkish war, the battleship made naval demonstration off Asia Minor, and sailed to Messina for assistance in the aftermath of the 1908 earthquake. During the 1911-12 war with the Ottoman Empire, she served under Vice Admiral Augusto Aubry with the 1st Division, 1st Squadron along with her three sisters in the operations to seize Libya. She escorted a convoy carryingd half of the 2nd Infantry Division to Benghazi and shelled the city when refusing to surrender. After the city was taken she stayed in harbour, contributing to landing parties and providing fire support, even repelling an Ottoman counter-attack. In March 1914 she took part in groundbreaking experiments by Marconi with the wireless telegraph in Syracuse, Sicily.

During the great war, she remained mostly inactive as it was decided to blockade the Austro-Hungarian fleet with lighter ships instead, including MAS boats. However if the latter was to exit from Pola, Italian battleships were preserved for this potential major naval battle. Head of staff Paolo Thaon di Revel also thought the presence of submarines and TBs in the Adriatic made it a real threat for capital ships -as shown by the loss of the Amalfi- the cruiser equivalent of the Regina Elena.
Stationed at Taranto, Brindisi, and Valona, part of the 2nd Division she remained idle, even when the Austro-Hungarian cruisers were raided Otranto. They should have been deployed fast enough to catch them but were forbidden to depart by their commander, fearing enemy submarines. We can imagine the frustration of the crews in 1917. After the war and 1922 Washinton treaty they could have been kept (they would certainly had more value if modernized than the ships allowed to the Weimar Republic marine), but were scrapped in 1923 to order to make room for new ships (see schematics).

What-if modernization in the 1930s of the Regina Elena, as second class BBs.

Like her sister-ships, Napoli spent seven months of the year in active service, training and taking part in multiple naval exercizes while spending the rest of the year in reserve. Nothing really notable is coming forward. She took part in the war with the Ottoman Empire in 1911, blockading Tripoli and later covering the assault on Benghazi. The city was razed by the guns of the four sister-ships, and afterwards repelled a counter-attack. She was anchored at Derna, to prevent any Ottoman ship to enter the harbour. She later withdrew to Italy for repairs and refit. She later sailed to Rhodes from Sicily, escorting a convoy, and covering the assault. She also covered further landings to seize several islands in the Dodecanese in 1912 an later pattrolled the Aegean. During the Greeat war she remained inactive with the 2nd Division, rotating between Taranto, Brindisi, and Valona and after the war she was scrapped in 1923. For a few years, she took part in the 1st division in many fleet exercize for part of the year, During the italo-Turkish war she made a sweep in the Aegean and later participated in the operations to seize Libya from the Ottoman Turks. She took part in the assault on Benghazi and remained there with Regina Elena, San Marco and Agordat. She returnd to italy for a short refit and to be resupplied. She also took part in the assault on the Dardanelles, cutting submarine telegraph cables between Imbros, Tenedos, Lemnos, Salonica, and the Dardanelles. However these agressive moves were not responded by the Ottoman fleet as expected.

She sailed to Rhodes, then taking part in the convoy escort and assault. She later patrolled between Crete, Rhodes, and Samos. From late August to October she was back in Italy for a new refit and taking suppies. During the great war, she remained in various naval bases, rotating but idle, waiting for the major battle that never came as the Austro-Hungarian fleet remained at Pola. The threat of submarines, though, was real. She was written off in 1926 and scrapped.

Same observation as above, the battleship participated in the italo-Turkish war, and the campaign of Libya, as flagship of Vice Admiral Augusto Aubry. When the war broke out, she was patrolling the Aegean Sea, searching for the Ottoman training squadron which sailed from Beirut, and bound to for Constantinople two days before. She was part of the escort for the 2nd Infantry Division to Benghazi, covering the landings and city assault operations, and later the Ottoman counter-attack to retake the city.

Afterwards, together with Pisa, and the cruisers Etruria and Etna she was stationed in Tobruk. After a refit in Italy she went back under command of Admiral Luigi Faravelli. She escorted the convoy of the 1st Division from Taranto, bound to Rhodes and operated to cover operations in the Dodecanese and the Aegean. She remained inactive during the great war, rotating between three naval bases as part of the 2nd Division. In 1922 she was in Constantinople when one of ther cutters collided with the American destroyer USS Bulmer. Written off in 1923, she was scrapped soon after.

Illustration of the Regina Elena in 1914 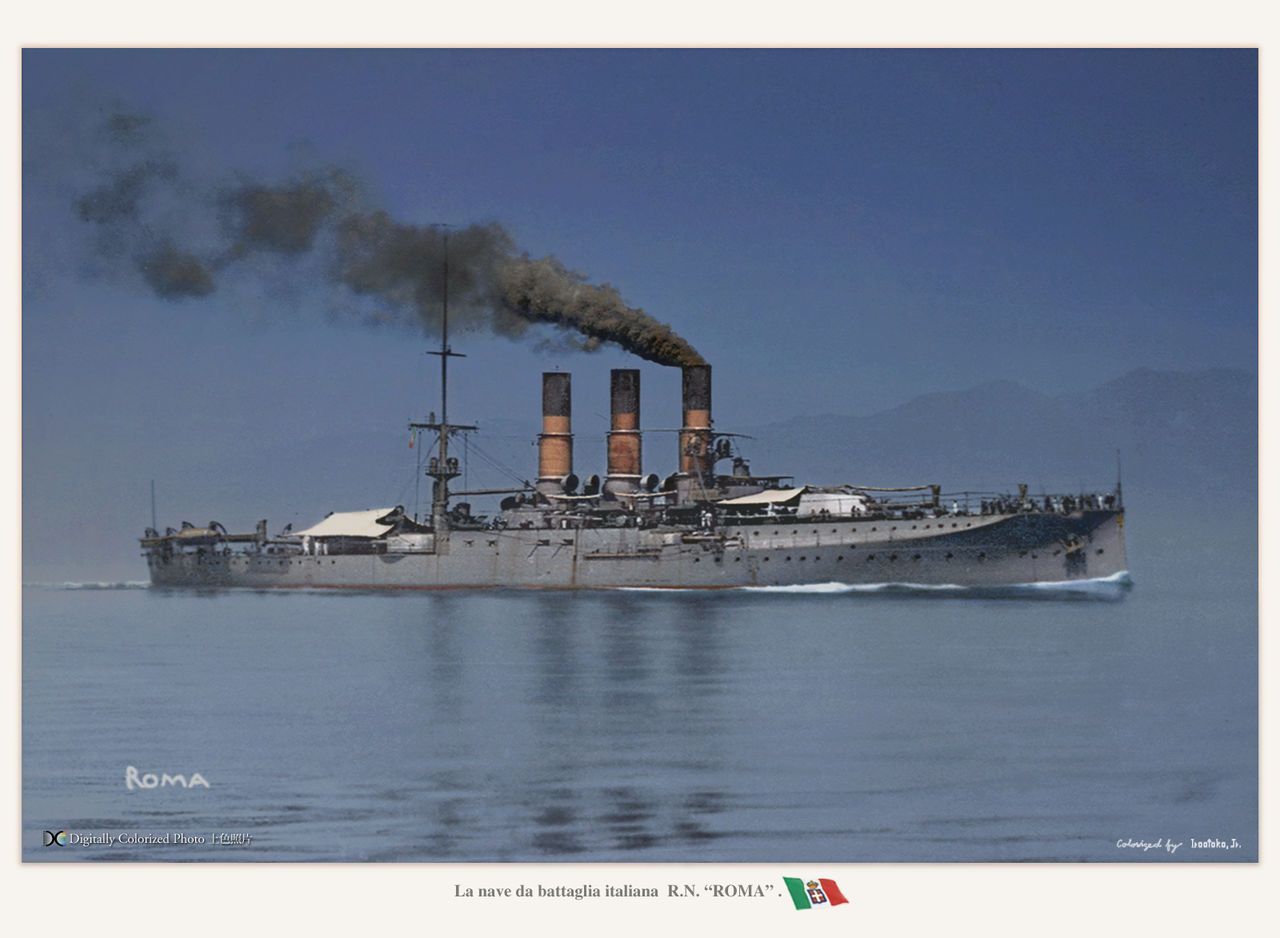 Colorized photo of the Regina Elena by hirootoko Jr