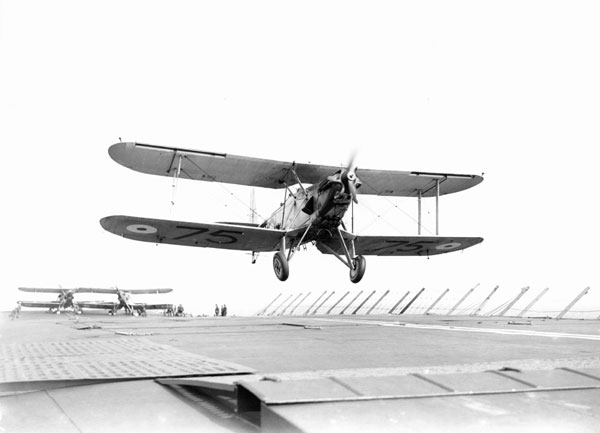 The Blackburn T.5 Ripon was a carrier-based torpedo bomber and reconnaissance biplane, a basis for the Japanese license-produced Mitsubishi B2M and for the bomber Blackburn Baffin. Designed as a successor to the Dart it flew for the first time on 17 April 1926 and mostly operated with the Fleet Air Arm as a torpedo bomber from 1930 to 1935, then withdrawn for the Blackburn Baffin and later produced in Finland, seeing combat in the Winter and Continuation Wars.

Short story of Blackburn and the Navy

The Royal Navy had a serie of Torpedo Bomber onboard its numerous carriers in the interwar. The best known is the Swordfish from Fairey, but it only was introduced from 1934, and Blackburn was the favorite at that time and that category in the 1920s, not Fairey; From the 1919 Sopwith Cuckoo, it’s Blackburn that stuck with the Royal Navy, with the imaginatively named Blackburn Blackburn in 1923, a spotter which impressed the Fleet Air arm for it’s ruggedness and innovative solutions (a trademark of the company since the 1910s, one of the very first to introduce a metallic fuselage), not for it’s obvious ugliness. Before that it already shown it could do a reliable and more conventional torpedo bomber with the 1922 Blackburn Dart. It was never replaced by the 1925 Hawker Horsley.

The Dart was the absolute dear to the Navy as main standard single-seat torpedo bomber of the Fleet Air Arm, used in its many iterations from 1923 until 1933. It was a stunning success that really entrenched the reputation of the company for the Royal Navy in that decade. It first flew in 1921 with all the experience of WWI, and aiming at replacing the obsolescent Sopwith Cuckoo, one of the rare venture of the famous fighter maker in that category.

In all 118 Darts were made, also exported as the Spanish Armada T.1 Swift Mk.II and to the Greek Navy as the T.3 Velos, still in service in 1941 and licence-built there. This sturdy two-bay equal span biplane had a fuselage with a metal structure and fabric covering. It was classic, but the choice of the tough Napier Lion IIB W-12 capable of 450 hp (340 kW) and later Lion V (465 hp) cemented it’s reputation. It was aboard all carriers in service at the time, the HMS Furious, Argus, Eagle, Hermes, and soon Glorious and Courageous as well.

In 1923, the British Air Ministry issued the Specification 21/23, stating requirements for a new carrier-based torpedo bomber, in order to replace the obsolescent single-seat Blackburn T.2 Dart. Practical range was to be at least 900 miles, or 12 hours autonomy as a key requirement. Like its predecessor, this new model was to carry the standard 18-inch aerial torpedo, or three 236 kg, or six 113 kg bombs. Manufacturers contested the range requirement as too stringent and it was somewhat softened to ensure manufacturer’s submissions.

Blackburn Airplane & Motor Co. Ltd. naturally expected the Navy specifications and already worked on their own replacement on private venture, and so her project was slightly adapted to meet the the RN requirements, designated T.5 Ripon. It was a further development of the Dart (also called Swift/Velos) and was ready for comparative tests in 1926 after being accepted. Blacburn was asked to produce two prototypes, numbered N203 and N204. The first took off on April 17, 1926, and the second, N204, as an hydroplane for comparative tests, on August 26.

N203 was transferred in October 1926 to the Martlesham Test Center while N204 went to the Felixstowe hydroaviation base. The T.5 competed against the Handley Page Harrow and Avro Buffalo, also made as private ventures abnd selected for comparative tests by the RN as well. These competitive trials however ended as mostly failures to reach the required assessment for all three manufacturers. Thus, a second round of tests was announced and fixes were to be made.

Blackburn worked out the Ripon under pressure at a frantic pace, replacing the initial 467 hp Napier Lion V by the model X, which was rated for 570 hp and modified the radiators, but also the wings and tail, entirely redesigned. The new prototype called N231 was presented for the second round of testing, designated T.5A Ripon Mk.II. Blackburn’s modificatios paid off as she emerged the winner of the competition.

The Aviation Ministry ordered a batch of eight aircraft (S1265-S1272) while Blackburn designers continued their improvements to the point the last delivered S1272 had a Napier Lion XIA engine and redesigned cowling, plus enlarged rear cockpit to fit a rear gunner. This was redesignated the T.5E Ripon Mk.III but it was not ordered into production.

The new specification 2/29 appeared, and to continue matching it, Balckburn had to modify it’s production to the new T.5B Ripon Mk.IIA standard. It was armed with a fixed forward Vickers machine gun, a new Fairey system to mount a rear Lewis machine gun, and transparent dome under the fuselage for the crew responsible for bombing, with an aiming system. Forty were ordered and produced from July 1930 to May 1931.

Next, came the T.5B Ripon Mk.IIC based on the specification 13/31. It’s wooden wing structure was replaced by duralumin-steel framing. 30 of these were built, up to March 1932 and last four in January 1933-January 1934 only for spare parts. Production of the Ripon ended for good, at least in Britain. Soon, Finland was interested to acquire the licence and was granted a first batch for assembly (see later).

The prototype Ripon Mk.I was a two-seat, single-column biplane of mixed design. Its engine was an inline Napier Lion X. The final model integrated more metallic framing and cladding: Only the aft part, starting at the rear MG-gunner post, was covered with fabric, as the vertical tail. The wings had a dihedral shape (V-section), and were rounded. All four were made with metal framing, covered with fabric and the lower ones were slightly longer. Steering was by cables only. These were rather large models due to the need of carrting an aerial torpedo. Yet the landing undercarriage was not that tall, there was still room to spare under the torpedo. To avoid mishaps, the payload was anyway dropped before any landing, if unspent.

Aerondynamics were good, despite the Ripon was never tested in wind tunnel other than a model at Blackburn. The inline engine helped to keep the nose streamlined. The greater difference with older models, there on the prototype already, was the choice of a gull wing configuration for the lower wings: They were attached to the fuselage with a sloped downwards, and the main struts for the landing gear rested on the structure in between the two wings sections. This enabled a better visibility and had some positive effect of sustentation.

The Napier Lion X of the prototype was replaced by a Napier Lion XI on the serial Mark II. It was replaced in turned by the Lion XIA W-12 water-cooled piston engine developing 570 hp (430 kW) from the IIA, IIC. The experimental Mk.III called “long nose” had an ever more powerful model but bever was retained for production. It led directly to the Baffin, equipped with a Bristol Pegasus radial.

The fixed armament was both defense and offensive: There was a single fixed, forward firing .303 in (7.7 mm) Vickers machine gun (not on the Mk II) on the fuselage, synchronized, and a single .303 in (7.7 mm) Lewis gun in rear cockpit position, on a flexible mount or simple pintle as it seems on photos. It was rarely mounted.

The first six Mk.I production aircraft entered service with the RNAS in late 1929 and by January 1930, No 462 Fleet Torpedo Bomber Flight was also equipped, and based for the first time on the aircraft carrier HMS Furious. By December 1930, No 461 Flight was also equipped woth the Ripon, and joined the aircraft carrier Glorious. In the same year, a series of 13 aircraft (S1357-S1369) was ordered, delivered to the fleet in January-February of the following year. The T.5B Mk.IIA entered service with Nos. 460, 461 and 462 Flight. In the first one, they replaced the obsolete Darts, and in the last two, they replaced their first serial modification (Ripon Mk.II returned to the factory for modernization to Mk.IIA). It seems too large and heavy to be operational on HMS Hermes, Eagle and Argus.

In 1931, the Ripon IIC entered service with Nos. 465 and 466 Flight and in April 1933 the reorganization of the Fleet Air Arm saw all the earlier Ripon brought up to IIC standard. The 36 modified were distributed between No 810 Squadron (HMS Courageous), No 811 Squadron (HMS Furious), No 812 Squadron (HMS Glorious) and replaced in 1935 starting with No. 811 Squadron by the superior Blackburn Baffin.

Replacing the Ripon: Baffin and Shark The Blackburn B.5 Baffin (1932) was essentially the bomber only version of the Ripon. It was designed by F A Bumpus and first flew on 30 September 1932. It was used by the Royal Navy, fleet air arm in service with the 810, 811, 812 and 820 Squadrons of the RAF. It was also used by three Squadrons of the young Royal New Zealand Air Force, with 97 built in a single version, using metallic structure and covered fuselage, plus the Bristol Pegasus I.M3 9-cylinder air-cooled radial piston engine, 565 hp (421 kW) used also by the initial Swordfish. But it was less successful and retired in 1941. It still saw the first three years of WW2 mostly with the RNZAF. The Blackburn T.9 Shark (1933) was actually the last Blackburn torpedo bomber for the Royal Navy, replacing the Ripon and competing with the Fairey Swordfish, which was judged superior. Still, this was the largest production of any previous Blackburn torpedo bomber, with 269 delivered. It saw three main versions, the Mk.I, the Mk.II for 6 Sqns. of the RCAN, IIA for the Portuguese Navy (still in service until 1945), and the improved Mk.III with a Bristol Pegasus III. It shared little with the Ripon but production went on until 1939. Both the RCAF and the RAF in colonial areas, or the Portuguese, used it until the end of WW2.

WW2 service with the Finns

Two export versions were developed, the first aimed at the Spanish market, called the T.5C. It was tested but not accepted. However the second export versions met far more success. The Finnish government ordered Blackburn a tailored version of its needs, a specialized reconnaissance version for the Finnish Air Force. This gave the T.5D Ripon Mk.IIF (“F” standing for Finland) modified with the 530 hp Bristol Jupiter VIII radial engine and provided a new underbelly structure for quickly interchangeable wheel/float landing gear.

A requirement idealy suited for the numerous watery surface, lakes dotting the Finnish landscape. In September 1929, RI-121, the very first, was handed over to the Finnish Air Force. It passed all tests with flying colors and was approved for production. The contract specific it under licence, as to be made at the Valton plant in Tampere. This was setup in 1930 and until the end of 1934, 25 were produced of this version. They however were modrnized over time, by using better engines, the Gnome-Rhone Jupiter VI with 480 hp for RI-129 – RI-135 then, the 535 hp Armstrong Siddeley Panther IIA for RI-136 – RI-143 and eventually the 580 hp Bristol Pegasus IIM3 for RI-150 to RI-159. All were used in the Northern War against USSR in 1939 and 1940, as well as in the continuation war for the remainder in the summer of 1941.

Ripon of the RAF dropping a torpedo