The Mogami class cruisers comprised four ships, Mogami, Mikuma, Suzuya, and Kumano, launched in 1934 (1936 for Kumano) and completed respectively in 1935 and 1937. They were built at Kure, Mitsubishi in Nagasaki, and both Yokosuka and Kawasaki yards, the latter at Kobe. Sea trials revealed problems for the first two, the usual vibrations problems due to the structural weakness in the hull. This was so severe than both the fire control director and turrets were unusable. The last two were built later and promptly reinforced and their design revised. They received ballasts for stability notably. The first however went straight back in drydock for a refit in 1936-38 and the same modifications, including heavy internal bracing.

These were reclassified as light cruisers because of their initial standard displacement of 8,500 tons. But they possessed no less than fifteen 155 mm guns in five triple turrets, like the contemporary Brooklyn class of the USN, reached 37 knots. By their fully loaded however, they clearly belongs to heavy cruisers, as many comparable cruisers built at the time of the London treaty putting a de facto ban on 8-in guns. 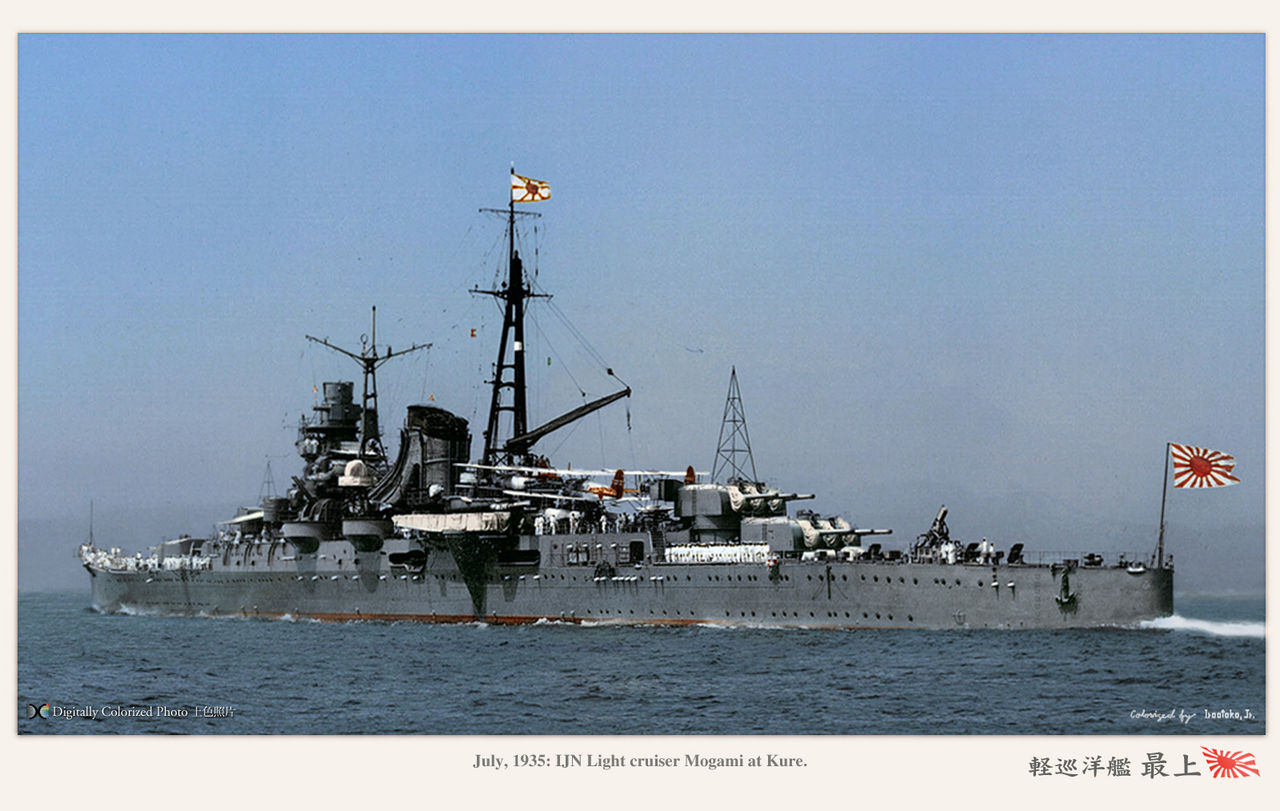 Mogami at Kure in 1935 trials
⚠ Note. This post is a placeholder, it will be greatly enhanced in the future and officially reposted on all social networks.

Design of the Mogami

In 1939, after their last refit, these ships displaced 11,200 tons standard, having 3,700 tons of additions. A second series of modifications followed in Kure in 1939-40, as Japan left the treaties, and was freed to rearm them with five 8-in twin turrets. They width also increased, protection was further improved and AA reinforced. Initially it comprised four 5-in twin turrets and four 40 mm but soon went to twenty, then thorty 25 mm AA in single, twin and triple mounts. Finally it went up to fifty for the survivors, at the battle of Leyte. Still due to stability, their initial torpedo-tube load went to four quadruple to four triple, but with Type 95 Torpedoes it was still a volley of six per side, deadly and very long range ordnance. Their reduced superstructures offered less vulnerability and inspired the cruisers to come. 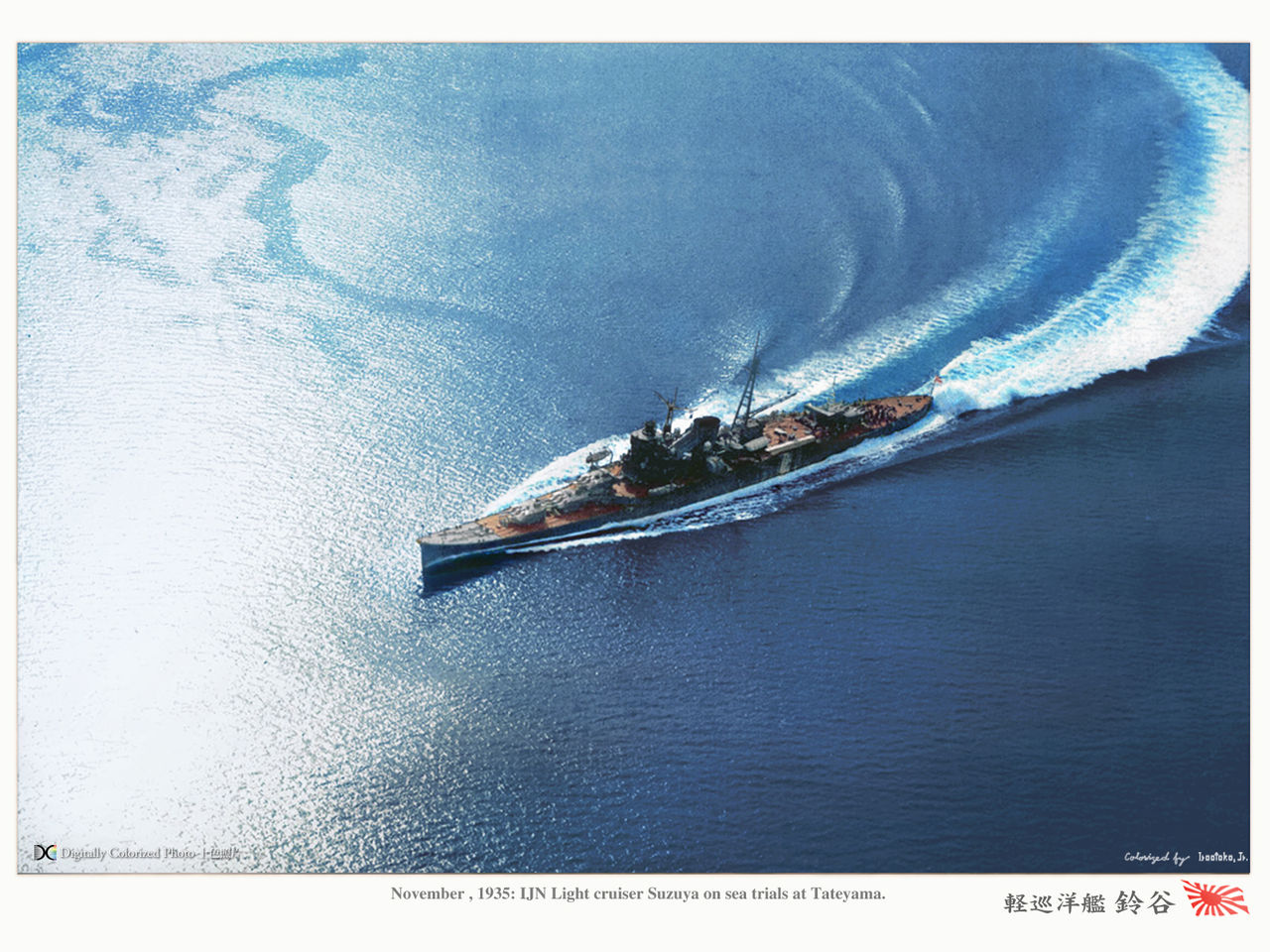 Suzuya on trials at Tateyama 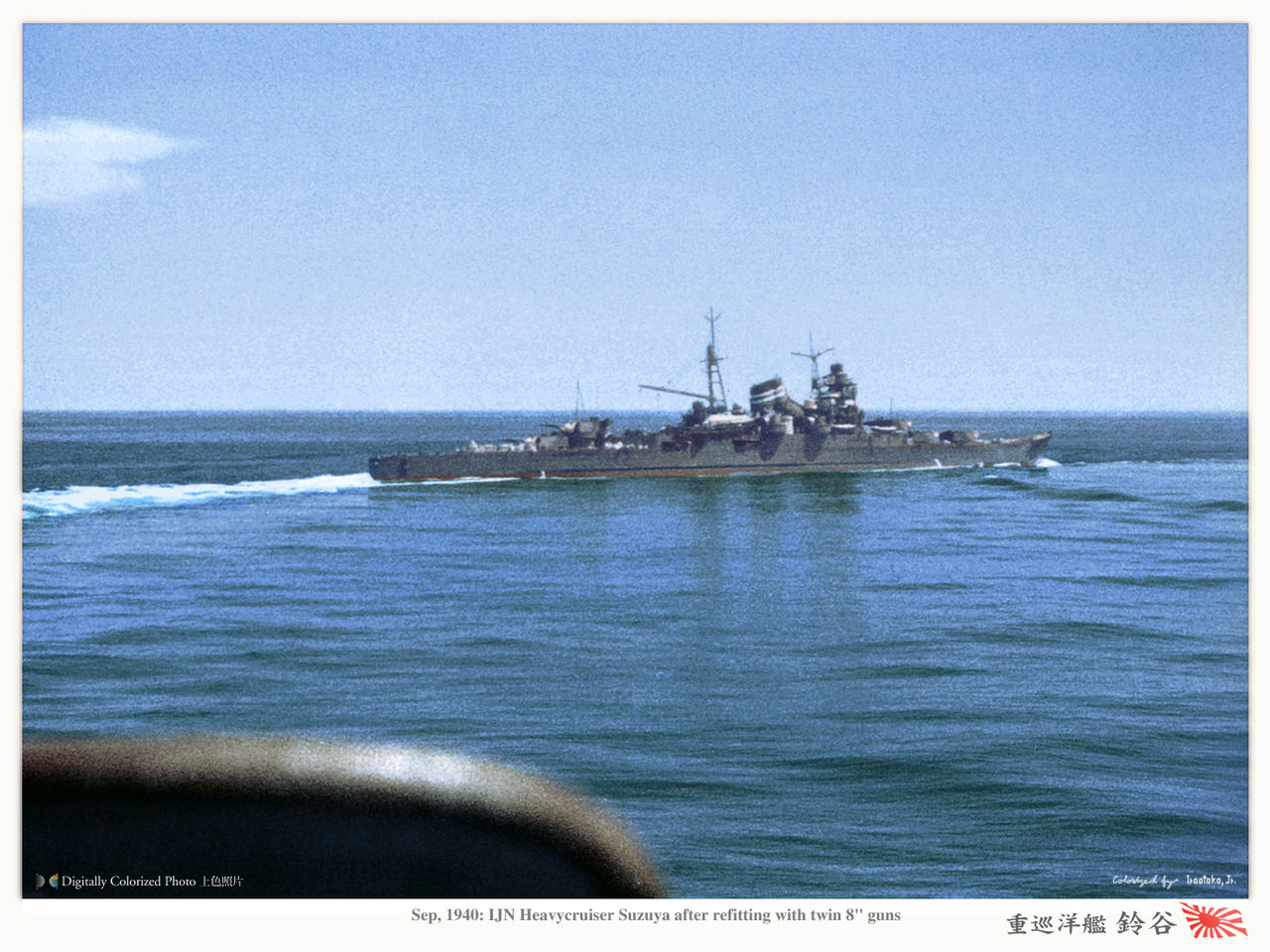 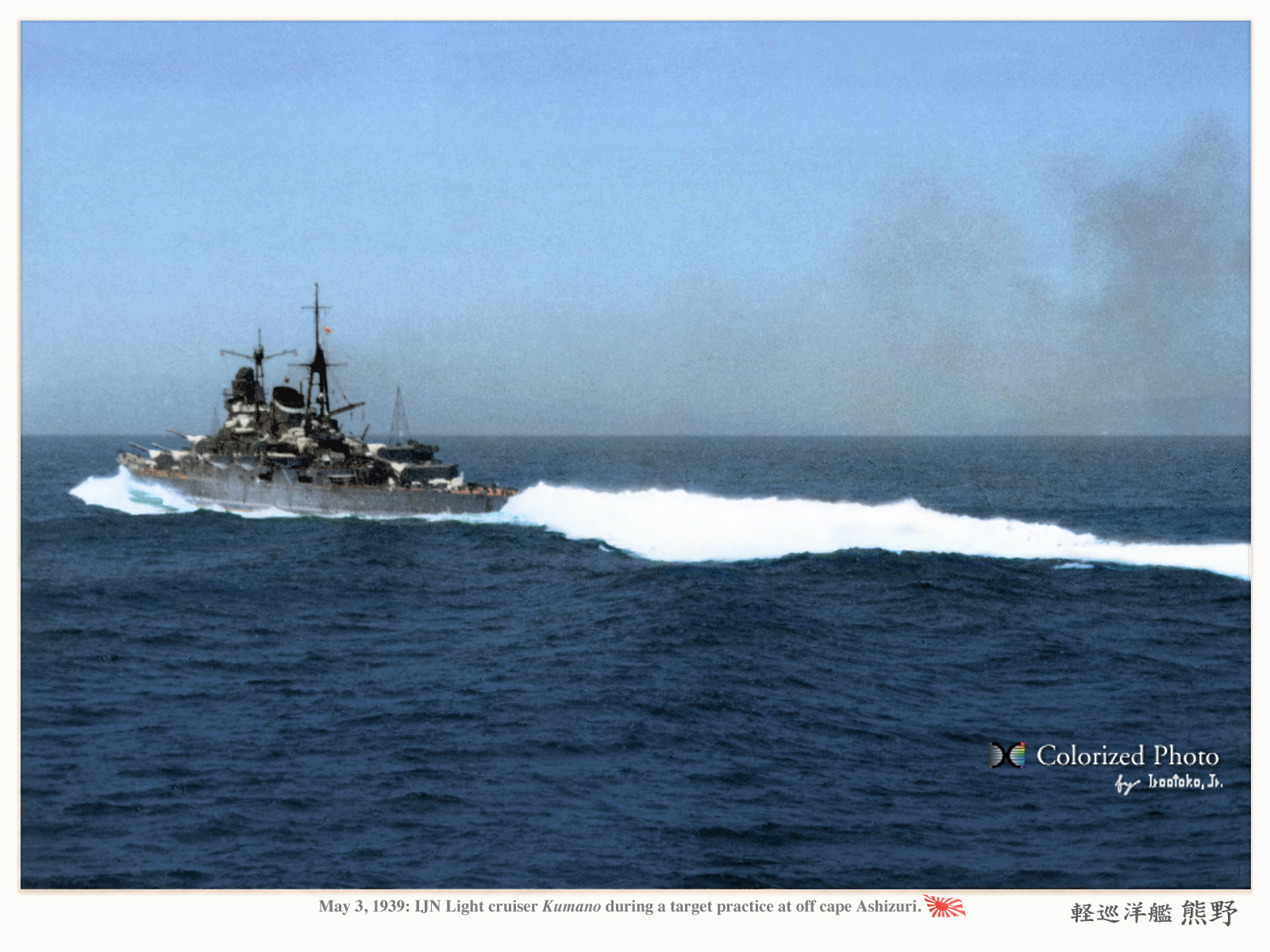 The Mogami, Mikuma, Suzuya and Kumano in action

IJN Mogami and IJN Mikuma were present at the Battle of Midway, in June 1942, under command of Admiral Yamamoto. The two ships were badly damaged by aviation, the first in the confusion of the night, by a serious collision on June 6, 1942, at 2:15 am, then around 5 am, while the Admiral ordered a general withdrawal of the fleet. She was badly damaged by SBD Dauntless dive bombers.

IJN Mikuma did not survive the battle and sank, while Mogami was attacked later in the day. She survived, crippled, sailing to Kure and stayed there in repairs for a long time. As a result, sent back to Japan for full repairs she was eventually rebuilt into a hybrid aircraft carrier, carrying 11 seaplanes, including torpedo carrying models and the A6M2N Rufe fighter. She was set for a better coverage to the squadrons. In 1943, she resumed service with also a new revised AA composed of thirty 25 mm guns, in fifteen twin mounts. 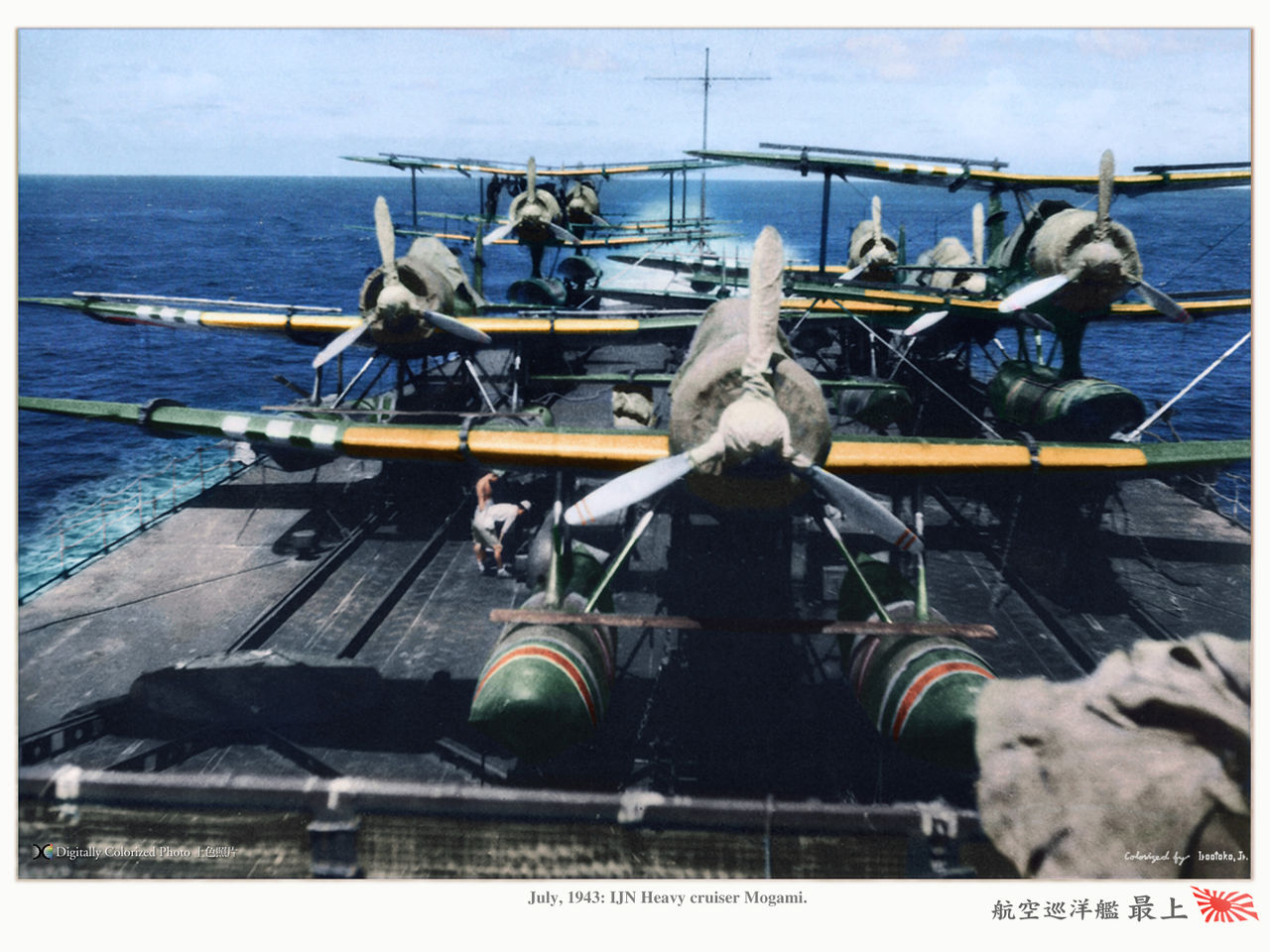 Rear deck of the Mogami after conversion

This reconstruction inspired the admiralty, who decided to order the construction of a further two cruisers of the same type, the Ibuki class. Only the first was nearly completed, reconverted in between as a fast aircraft carrier. Mogami participated in the battle of Surigao soon after, and she was savaged by American cruisers's heavy fire. All three, Mogami, Suzuya and Kumano, were also present at the Battle of Samar near Leyte, falling on Taffy 3, but repelled after an epic defense. This closed the 1944 year on a crushing defeat for the Japanese.

IJN Mogami was sunk indeed on the 25th by Grumman TBM Avenger torpedo bombers. IJN Suzuya was sunk the saeme way, while Kumano survived, but finally spotted and bombed by other aircraft on November 25, 1944, exactly one month after the disappearance of her twins. 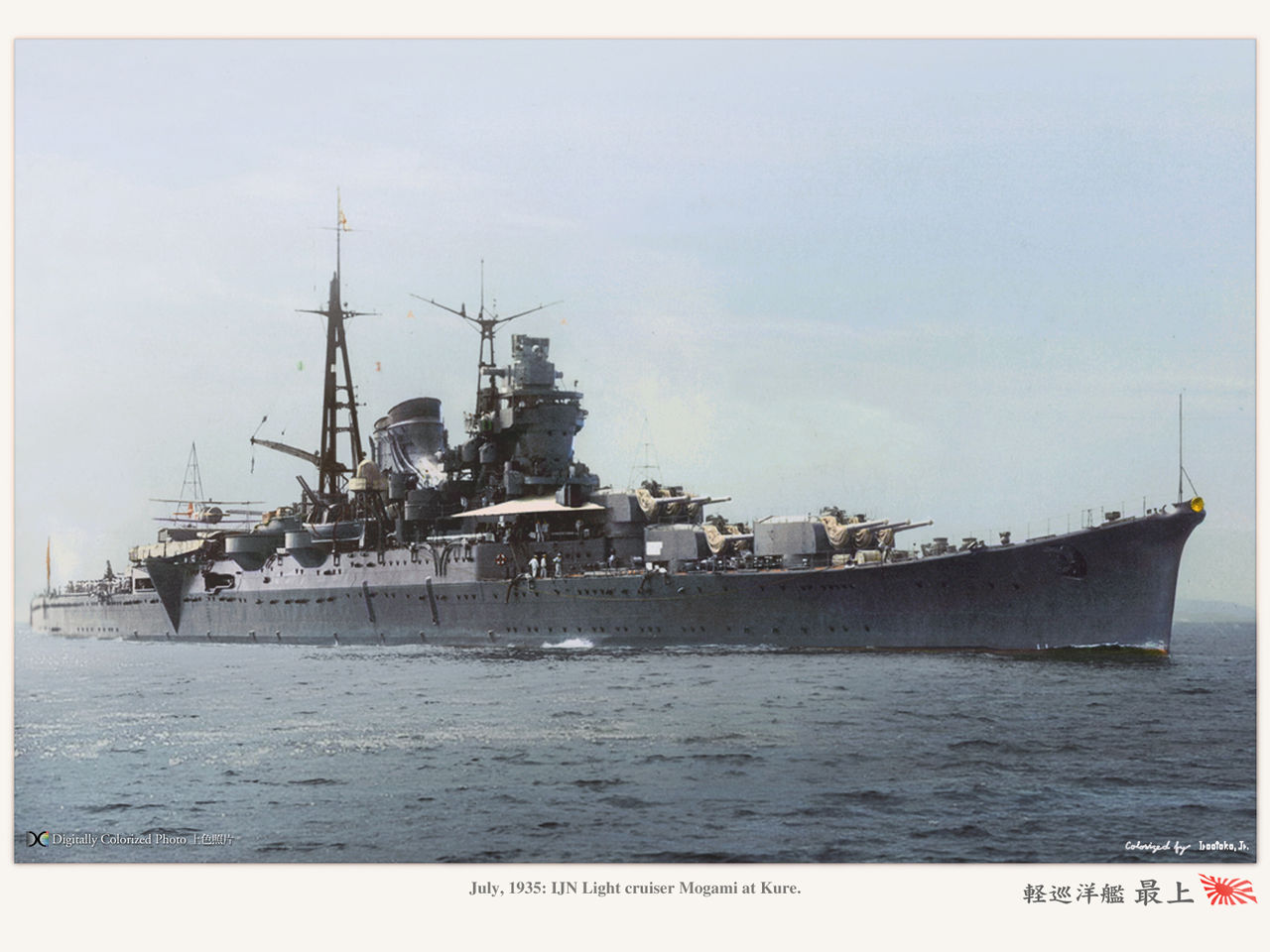 IJN Mogami after conversion as a seaplane carrier 1942